It has been a summer like no other. While many of us have been preoccupied with weather extremes and ever-changing rules on holidays abroad, High Speed 2 has been ramping up activity with a flurry of announcements showing little sign of a slowdown for the traditional break. 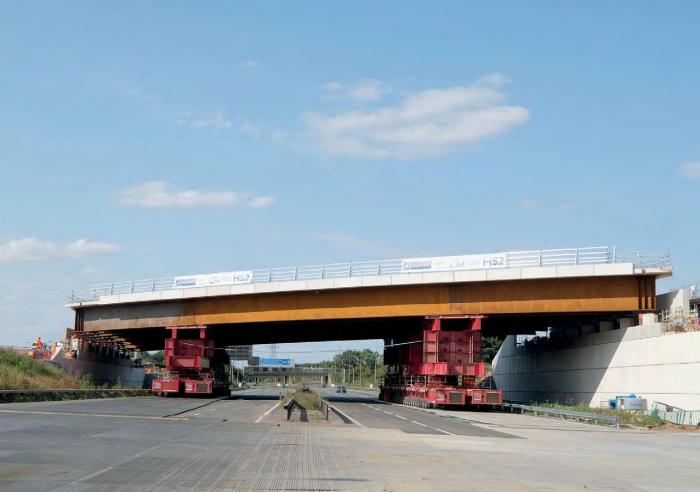 First permanent structure on HS2: this 65-metre bridge over the M42 was installed in August.

In our July issue we examined activity at the South Chalfont portal, tunnelling launch site for the 10-mile Chiltern tunnel. Since then the Align joint venture of Bouygues Travaux Publics, Sir Robert McAlpine and VolkerFitzpatrick and subcontractors has completed the 17-metre high headwall ready for the first tunnel boring machine launch early in 2021. In order to reinforce the ground behind the headwall, more than 636 soil nails – some up to 20 metres long – were driven into the wall and connected to the concrete lining. This reinforcement is required to hold the ground and the surface of the wall in place as the tunnel boring machines (TBMs) begin to break through.

Assembly of the first TBM by Herrenknecht in Germany is now complete and it will be shipped in pieces to the UK to arrive at Align’s main site just inside the M25 later this year. Following a public vote the first two tunnel boring machines will be named Florence and Cecilia – honouring Florence Nightingale, the founder of modern nursing, and Cecilia Payne-Gaposchkin, the astronomer and astrophysicist born in Buckinghamshire who became Chair of Astronomy at Harvard University in the United States. Also on the shortlist, but losing out in the vote, was Marie Curie, the first woman to win a Nobel Prize.

Both 170-metre-long machines have been designed for the mix of chalk and flint they will encounter under the Chilterns. Operating a ‘continuous boring’ technique, they are expected to take around three years to excavate the 9.1-metre diameter tunnels, which will be lined with concrete as they go. The TBMs will mix the spoil with water to form a slurry which will be pumped back to the main site, where it will be treated before being used for landscaping on-site, avoiding the need to take it away by lorry.

Environmental concerns also feature in the design of the first of four headhouses that Align will build along the Chiltern tunnel route. These buildings will sit at the top of shafts, up to 60 metres deep, joining the twin HS2 tunnels below. Fans and other equipment will be installed to regulate air quality and temperature in the tunnels; the shafts will remove smoke in the event of a fire and provide access for the emergency services.

Designers for the Chalfont St Peter headhouse have been challenged to create a building that few people will notice. The result is a structure that resembles an agricultural barn that will house all the apparatus of a modern railway. A pre-weathered zinc roof, designed to age naturally over time, will sit above a single storey-building with doors and vents picked out in a dark bronze colour.

A new bridge, which HS2 Ltd says is the first permanent structure to be installed along the route of High Speed 2, has been manoeuvred into place.

Work to install the 65-metre crossing, spanning the width of the M42, was completed in two days, ahead of schedule, with the motorway reopening to road users on 9 August, 22 hours earlier than planned.

Installation of the bridge was led by specialist engineering contractor Expanded and HS2 enabling works contractor Laing O’Rourke/Murphy. The 2,750-tonne bridge structure was carried along the motorway on a self-propelled, 448-wheel modular transporter which took one hour and 45 minutes to move the bridge span 150 metres, where it was fixed to a composite concrete deck to complete the overall bridge structure. Traditional construction methods would have needed several weeks of motorway lane closures followed by additional weekend and overnight closures.

Three more bridges for the Birmingham Interchange road layout will be moved into position this year. A similar bridge will be installed over the A446 ahead of two more bridges which will cross the new railway.

Meanwhile, the latest HS2 contract opportunity out to tender is for high voltage power supply systems, valued at £523 million. Around 50 traction substations will be needed alongside the line between London and Crewe, while the winning contractor will also deliver a dedicated high voltage non-traction power network that will provide power to stations, shafts, portals, depots and railway systems along the route. A shortlist is expected to be announced next year, with contract award in 2022.

Two legal rulings affecting High Speed 2 have been made by the Court of Appeal. Environmental campaigner Chris Packham was unsuccessful in trying to halt HS2 on the basis that the recent Oakervee review into the project was flawed. The court decided that because the Government was under no obligation to commission the review, there was nothing set down that it had to comply with to decide whether it was flawed. It also rejected Packham’s request for Judicial Review.

Not quite as high profile, but perhaps more significant, was a decision in favour of Hillingdon Council in west London, which successfully argued that its planning approvals under the HS2 Phase One Act were more than a rubber-stamping exercise and it had to be provided with sufficient evidence by HS2 Ltd to allow it to make its decision.

According to Angus Walker, Partner at legal firm BDB Pitmans: ‘HS2 at the site in question affected a community of great-crested newts, although the approvals were in relation to the potential for archaeological finds. This may slow down the project as HS2 will have to give more information when seeking approvals from local authorities.’