INFORMED SOURCES: COVID-19 emergency support up to £900m a month

On 23 March Transport Secretary Grant Shapps announced his Department was providing franchise operators with ‘the opportunity’ to temporarily transition onto Emergency Measures Agreements (EMA). Under an EMA, all revenue and cost risk has transferred to DfT.

Operators are continuing to run day-to-day services for a small, pre-determined management fee. DfT will take all revenue and meet all costs. This is similar to the management agreement which already applied to the Govia Thameslink Railway franchise.

Financial commitments, including contingent capital risk, in existing franchise agreements or direct awards will be suspended for an initial period of six months. The deal includes options for further extensions or earlier cancellations of the emergency measures.

When the new arrangement was announced, passenger ridership had already fallen by 70%, with ticket sales down by two-thirds year-on-year. Not surprisingly it didn’t take long for the franchise owners to do the sums and sign up en-masse.

DfT had placed the Operator of Last Resort on standby in case any franchise owners didn’t want to take the Queen’s shilling. With OLR already on quick reaction alert in case terms could not be agreed with Southeastern and Great Western before the previous direct awards terminated on 31 March, taking any more crippled ducks would have been ‘difficult’.

Open access operators, as private companies, are reliant on the support being provided by the Chancellor, such as covering 80% of staff wages. 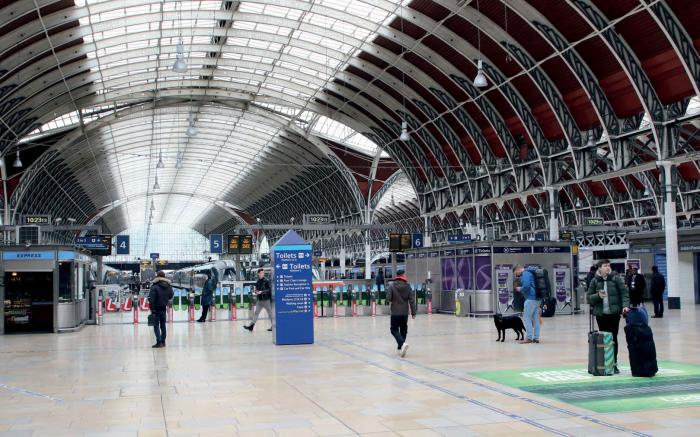 Where are the passengers? The concourse at Paddington on 20 March, before the so-called lockdown measures were implemented three days later.
Keith Fender

Naturally, the announcement was jumped on by the ‘bring back BR’ brigade as ‘nationalisation’. This is what is known as a ‘hot take’ in social media, where campaigners use any event to support their cause, however tenuous. Thus the EMAs were also seen as the portending end for HS2.

DfT did its best to promote the new arrangement as just a ‘temporary solution’. Nothing to see here, move along please.

Perish the thought that it is a ‘new model’: its aim is to ensure current events have ‘as little impact as possible on the railway in the longer term’. Allowing operators to enter insolvency would have caused ‘significantly more disruption to passengers and higher costs to the taxpayer’. And the decision did save DfT from some embarrassment, taking the immediate pressure off the Zombie franchises (‘Informed Sources’, March issue).

With revenue down by up to 95%, the usual approach of incentivising commercial performance by linking the management fee to revenue was not available. Instead, it will be set at a maximum of 2% of the cost base of the franchise before the Covid-19 pandemic began. The precise percentage will vary according to the individual profile of the franchise.

Even at an unprecedented time of national crisis, the civil servants still managed to insult the railway managers struggling to hold services together. DfT has found it necessary to structure the management fee ‘to incentivise operators to meet reliability, punctuality and other targets’. Who do they think we are?

According to the statement, the maximum fee attainable will be ‘far less than recent profits earned by train operators’. I’m sure that brought a wry smile to more than a few owning groups.

A couple of months back I published a detailed analysis of the change in the cost to the taxpayer of supporting the franchised railway (March issue). That is now irrelevant. So this month I have tried to evaluate the cost of DfT’s new model based on Office of Rail and Road data for 2018-19.

Let’s get the fees out of the way first. In 2018-19 nine train operating companies (TOCs) paid dividends totalling £218 million. Of course, other franchises cost their owners significant sums. 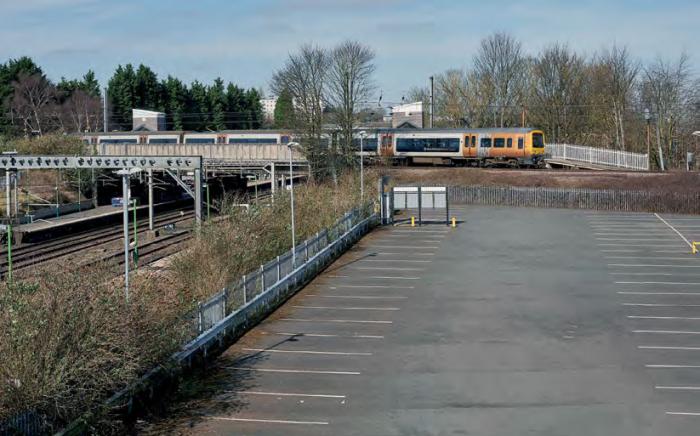 In its annual data ORR lists franchise expenditure under:

■ other, including Network Rail charges.

In a concurrent piece of work I have found some anomalies in the rolling stock charges category which ORR is currently seeking to clarify. However, for a quick and dirty analysis the first three categories represent the bulk of costs the DfT is now meeting. Franchise payments to Government are no longer relevant for the duration: payments to Network Rail I will come to later.

Under the EMA DfT will be paying franchised train operators the difference between revenue and costs. I have calculated this difference for each TOC on the assumption of a 95% fall in revenue.

Each month the EMA is in force will cost DfT £470 million. However, this excludes the Fixed and Variable Track Access Charges each TOC pays to Network Rail. In 2018-19 these payments were collectively equivalent to a further £446 million/month.

VTAC are supposed to be a surrogate for the wear and tear on the infrastructure caused by running trains. They are charged on the basis of pence per vehicle mile.

This should provide some mitigation of the cost. VTAC represents around 85% of total of TOC access charge payments to Network Rail. As the temporary services are running considerably less mileage than the usual timetable, VTAC should be less, perhaps by as much as 50%.

Nothing has been said about how Track Access Charges will be handled under the EMA. Since Network Rail is a government body, the sensible approach would be for DfT to add TAC to Network Rail’s Direct Grant to maintain the infrastructure operator’s income requirements.

With TAC, in round numbers, adding a further £450 million a month to the EMA bill, the maximum monthly cost increases to £900 million. This compares with a net subsidy of just under £30 million a month in 2018-19.

If I am correct on the impact on VTAC of reduced train mileage, halving VTAC could cut the cost to £700 million a month. Even should this optimistic view be correct, over six months EMA payments would equal DfT’s total support for rail in 2018-19 (‘Informed Sources’, last month).

What will happen to ridership as the restrictions on movement are relaxed is impossible to predict. Passengers will return, but how quickly and in what numbers?

To judge by the announcement of the new direct award for Great Western (p9), the Department for Transport thinks it has some idea. In its press release announcing the award FirstGroup said: ‘At the conclusion of the EMA period, GWR will operate services as a franchise with revenue risk shared with the DfT through a Forecast Revenue Mechanism (‘FRM’) governed by today’s agreement, which also makes provision for a revenue rebasing exercise as required. The FRM will apply if revenue variances differ from target in the bid assumptions, outside of a nil rate band, and is available from the start of the agreement. Payments or receipts occur when actual revenue is 1.5% higher or lower than the expected FRM revenue, at 90% of the revenue difference’.

That comes under the category of ‘super-heroic’. Presumably, given the time taken to agree a deal, the forecast revenue profile is based on pre-Covid-19 and the ‘revenue rebasing exercise’ will adjust the starting point, and subsequent profile, to match emerging real life rail travel market conditions when the emergency ends.

Presumably EMA payments will reduce in step with increasing farebox revenue. But when the EMA period is over is likely to vary between franchises. And then there are the Zombie franchises, like South Western Railway and TransPennine, for which the ending of EMA will herald the arrival of that nice man from the Operator of Last Resort. 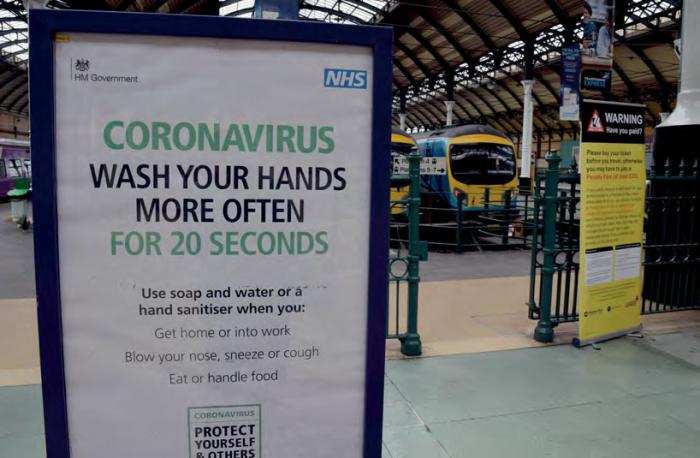 But for the viable survivors, there are precedents for recovery from setbacks. The recession in the early 1990s saw passenger ridership plummet from 33.7 billion passenger kilometres a year to 28.8 billion in 1994. It then took three years to recover the lost traffic.

In October 2000, the Hatfield derailment almost shut down the railway as Railtrack famously suffered a ‘nervous breakdown’ over gauge corner cracking. Worst affected were the long-distance operators. Figure 1 shows the effect on revenue.

In the case of Inter-city East Coast, the worst affected and then operating as Great North Eastern Railway, full recovery took around three years.

Finally, while the world financial crisis of 2008 helped finish off National Express East Coast, in ridership terms growth simply paused for a year. There was a slight decline, but the fall was no more than a rounding error.

In all these cases, ridership and revenue fell and rebounded. Today we have an effective shutdown. And during that shutdown much will have changed, not least the economic situation. How much it has changed will determine the future financial implications for train operators.

Historically, regional service revenues have shown the highest hysteresis in the face of adverse external economic forces. In other words, they react less to both triumph and disaster. They represent roughly £1.5 billion in income and much of that could return relatively quickly as normal services are restored.

London commuting is a work in progress, with the old verities fast disappearing. This has been highlighted by DfT’s Central London Employment (CLE) revenue share/support mechanism for TOCs inverting.

As Greater Anglia and South Western Railway have found to their cost, when employment has gone up revenue has gone the other way. CLE has meant paying DfT revenue share when less than forecast revenue has been coming in.

This is assumed to be the result of the increasing number of people commuting two or three days a week and working remotely the rest of the time. By the time travel restrictions are lifted firms will have had several months of people working from home, will have set up the systems to support this and the number of part-time commuters could increase.

In addition, after months of social isolation and keeping two metres away from the nearest person, it could take time for people to readapt to getting up close and personal in a full and standing commuter train.

In 2018-19, London commuter TOCs represented around £3.8 billion of revenue. Collectively they generated a net premium of over £500 million. How much of that will return is the big unknown. 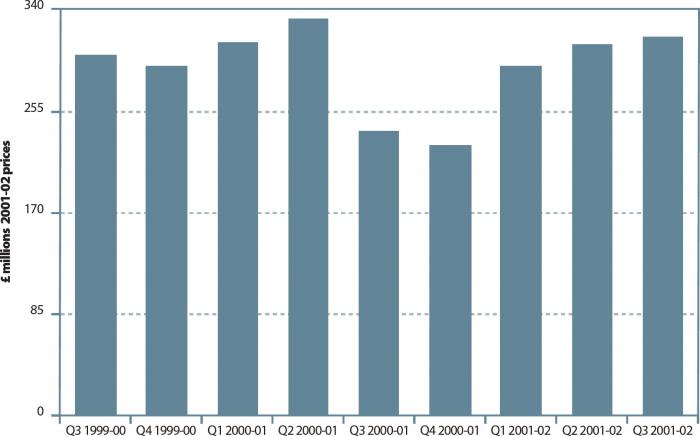 Finally, the long-distance operators took in revenue of just under £4 billion and paid a net premium of £250 million in 2018-19. Informed sources suggest two post-EMA scenarios. Business travel will be slow to return and not all of it will come back, with industry likely to be fighting a recession.

On the other hand, after months of shutdown, people will want to get out and about and, subject to them having the disposable income, leisure travel could boom. That assumes of course the availability of the fares offers needed to attract people who have been on reduced wages for months.

Overall, the railway is likely to face an investment squeeze as the economy rebuilds. It looks as though Network Rail Chief Executive Andrew Haines’ new structure, devolving responsibility for renewals and enhancements to the Regions, could make it easier to generate affordable business cases.