A LEAKED letter has revealed details of the proposed Trans-Pennine Route Upgrade (TRU), which would see parts of the route ‘closed for up to 39 weeks per year between 2020 and 2024’.

The letter, from Network Rail’s London North Eastern & East Midlands Route Managing Director Rob McIntosh to Transport Secretary Chris Grayling, reveals the £2.9 billion upgrade of the main route between Manchester and Leeds will take place over four years. In what was clearly a deliberate leak, the letter was received by several media outlets on the day the Transport for the North board met in Sheffield to consider plans for the TRU.

In the letter Mr McIntosh says the TRU ‘will significantly reduce journey times, increase capacity and transform a number of stations during CP6 (Control Period 6), delivering incremental benefits through to 2025’. The letter notes that the Victorian construction of the route through the heart of the Pennines with ‘inherently challenging topography’ means access will be difficult and disruption to passengers and local communities cannot be avoided, hence the extensive blockades. As a result, journey times will increase by between 15 and 25 minutes whilst capacity, using diversionary routes via the Calder Valley or Healey Mills, will be constrained. There will also be implications for freight, such as the biomass traffic from the docks in Liverpool to the South Yorkshire power stations. 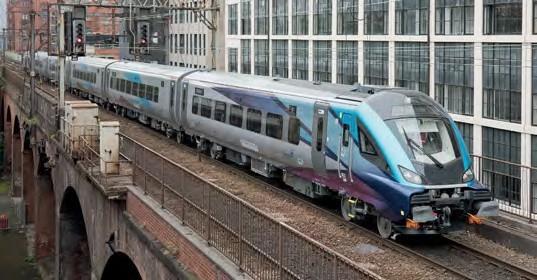 The TfN Board has called for a reassurance that ‘any upgrades are environmentally sustainable and do not have a negative impact on air quality’. Indications are that as part of the TRU electrification will only cover the Manchester to Stalybridge and Huddersfield to Leeds stretches, leaving the remaining 18-mile section unwired. Freight operators not only point out that this will ensure diesel traction is used for the full length of services which cross the Pennines but have also started to express concern that work through the 4,989-metre Standedge Tunnels to enhance the gauge for larger containers seems also to be at risk, as this work could be carried out in parallel with any electrification. It is expected local politicians will continue to press for full electrification to be included in the final scope of work agreed between the Department for Transport, TfN and Network Rail. Tony Miles