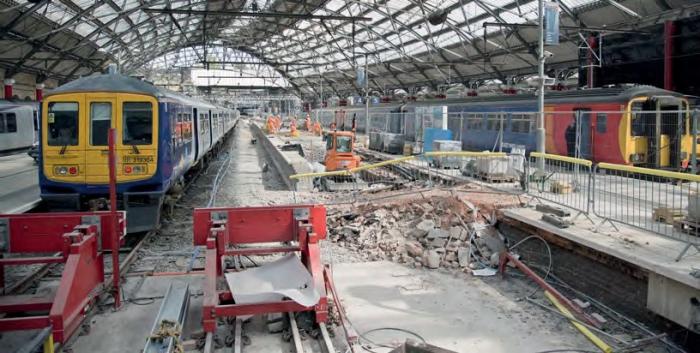 Working towards an improved layout: widening of platform 4 at Liverpool Lime Street underway on 17 May 2018. Tony Miles

The project involves the construction of two additional platforms and the closure of one other (as explained in our feature on the project in the December 2017 issue). It will create a 10-platform station with an improved track layout serving wider, straighter platforms that can accommodate longer trains. The improved station will be capable of handling an additional three trains per hour, and the work is a key prelude to the operation of TransPennine Express’s new direct services to Scotland from 2019.

After a full closure for the first week, the existing platforms 1 and 2 reopened on 11 June, served by a single bi-directional line, enabling Northern to operate three trains per hour to local destinations.

A further total blockade from 14 to 29 July will enable the tracks and signalling to be tested and the final layout commissioned, by which point the old platform 1 will have been disconnected and the track removed. However, the newly renumbered platforms 1 and 2 will operate at a reduced length until the end of October, when extension work is completed.

Full completion remains on target for the timetable change on 9 December, when new services are due to begin running to Chester via the Halton curve. From this point the station will have three platforms capable of handling 11-car Class 390 Pendolinos (Nos 6, 9 and 10) and two suitable for nine-car sets (Nos 1 and 2). All platforms will be capable of handling more than one train through permissive working.

Network Rail has undertaken replacement of all switches and crossings, along with installation of new overhead wires and new signals, with control of the signalling transferred to the Manchester Rail Operating Centre (ROC).

The track layout has been improved from the buffer stops at Lime Street through to Edge Hill, where the signal box at that location – which controls the tracks to Mossley

Hill, Roby and through the Lime Street tunnel – will be closed later in 2018 as control is also transferred to the Manchester ROC. The signalling will eventually be controlled from a new Siemens Westlock Interlocking at the Manchester ROC, supported by Frauscher axle counter train detection throughout the resignalled area. Six new relocatable equipment buildings have been installed at the top of the Lime Street cutting, linked by new cabling ladders installed on the cutting wall. This means signalling technicians can access the cabinets at any time without the need for track closures and other safety provisions.

The remodelled layout involves 24 new point ends and around 4km of renewed plain line track, including the tracks at all platforms. Innovative under-sleeper pads have minimised the ballast depth requirement through the Lime Street cutting, where the rock bed means the ballast can only be dug out to 250mm deep rather than the usual 300mm. Motorised switching for isolating the overhead wires has now been installed, meaning isolations can be done remotely. Improved point work has allowed improved speeds for trains departing the station whilst the configuration of the station with two five-platform sections means a half-station blockade is now possible if future work is needed. Tony Miles