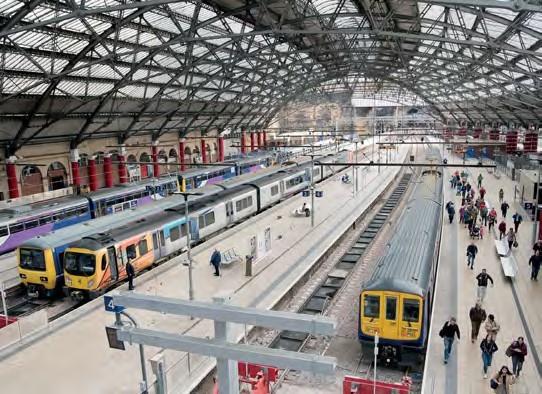 Just like in the CGIs: platforms 1 to 5 at Liverpool Lime Street on the inaugural day for the upgrade, 15 October 2018. Tony Miles

COMPLETION OF the £140 million upgrade of Liverpool Lime Street station was formally marked by Transport Secretary Chris Grayling on 15 October with the unveiling of a plaque on the station concourse.

Over 18 months Network Rail has created additional platforms, taking the total number of platform faces from nine to 10, with most of them widened and several lengthened as the station prepares to handle additional services in the next few years (the project was fully explained in a feature in our December 2017 issue). The majority of the work was delivered over two key phases, one taking place from 30 September to 22 October 2017 and the other this summer from 2 June to 30 July.

The final pieces of work were completed the previous day as the newly extended platform 1 was brought into passenger use. Previously platform 2, it has been extended from 160m to 220m in length to accommodate longer trains. Two brand new platforms have been created in the area once used as a taxi road and are now in use, with all work carefully planned to fit in with the historic Grade II listed station building.

The project has involved over a million ‘man hours’ of work and the installation of 11km of new overhead wiring. An extensive signalling upgrade also saw control successfully moved to the Manchester Rail Operating Centre in July. Tony Miles