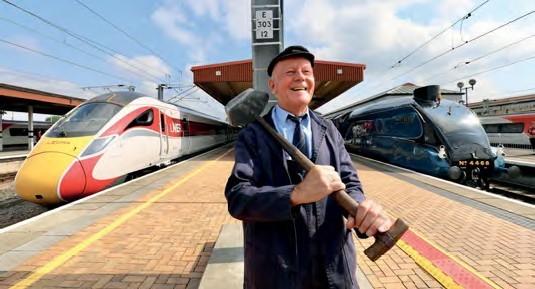 Azuma meets Mallard: No 800113 opposite the world’s fastest steam locomotive at York station on 30 July for the launch event, with Jim Smith from the National Railway Museum in the centre. Courtesy LNER

The first LNER Azuma worked in passenger service from the North East and Scotland on 1 August. Nine-car bi-mode No 800104 formed the 05.40 ‘Flying Scotsman’ from Edinburgh to London King’s Cross with a single stop at Newcastle, arriving one minute early at 09.39.

The working was the first scheduled passenger run for an Azuma north of Doncaster on the East Coast main line. No 800104 received special vinyls incorporating the Scottish flag and LNER’s own design of tartan for a launch event at Edinburgh Waverley the previous day.

On 30 July a launch event in York saw No 800113 draw up in an adjacent platform to the world’s fastest steam locomotive, Mallard, making its first outing to the station for 30 years. The Azuma then worked a preview trip to Darlington, where it arrived adjacent to A1 class steam loco Flying Scotsman.

LNER is receiving 65 Azumas from Hitachi: 13 nine-car and 10 five-car Class 800 bi-modes and 30 nine-car and 12 five-car Class 801 electrics. First into traffic are the Class 800/1 nine-car bi-modes, which began operating between London and Leeds/Hull on 15 May. LNER has accepted 12 of these, with six diagrammed on Leeds services and now a seventh to Scotland, with a further three dedicated to driver training.

On 26 July LNER accepted the first two five-car Class 801/1 electrics from Hitachi, Nos 801103 and 801104, with further acceptance planned at a rate of two per week. The five-car electrics will operate in pairs, with the first such use planned for 16 September on a Leeds diagram, allowing a second bi-mode to be introduced on Anglo-Scottish services from this date.

The introduction of a further two pairs of ‘801s’ to Leeds on 23 September will cascade two more ‘800/1s’ to Scottish services, from which point Azumas will be introduced on LNER’s daily working to Glasgow.

A fourth pair of ‘801s’ will follow on 30 September, cascading a further bi-mode to the Anglo-Scottish route. After the five-car electrics, the next type to be introduced by LNER will be five-car bi-modes (Class 800/2s), which the operator hoped to start accepting from Hitachi in mid-August.

The launch of an additional five return services between King’s Cross and Lincoln is contingent on this programme and is likely to place in October. Hitachi is now in the final stages of construction for the five-car bi-modes at the Newton Aycliffe plant in County Durham.

Manufacture of the nine-car Class 801/2 electric sets is now well underway at Newton Aycliffe. This is due to be completed by January 2020, with LNER targeting full introduction of the Azuma fleet by the middle of next year. 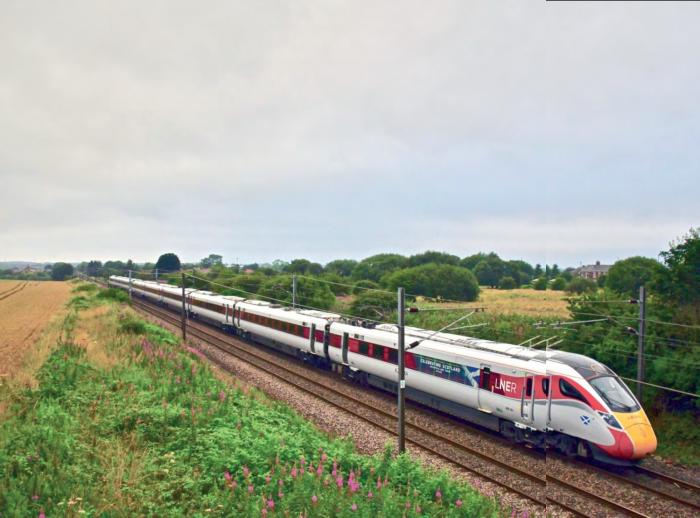 Introduction of Azumas on services to Aberdeen and Inverness is now likely to take place in mid-November. The replacement of the HSTs currently operating these services is contingent on an upgrade to the power supply in the Doncaster area to allow an increase in the amount of electric operation on the East Coast (p32, June issue). LNER Engineering Director John Doughty told Modern Railways the operator still plans to withdraw all its HSTs by the end of the year, after which they would not be compliant with Persons with Reduced Mobility (PRM) regulations. If any sets were to be retained into 2020, Mr Doughty said this would be ‘for a very short amount of time’.

After first standing down the former East Midlands Trains HST working the daily diagram involving services to Hull, LNER has now begun withdrawing its Class 91 locomotives and Mk 4 carriages. The operator started sending rakes of Mk 4s off-lease for storage at Worksop in late May, and by the end of September expects seven rakes to have been withdrawn.

LNER is making its remaining 23 Mk 4 sets compliant with PRM regulations by installing a Passenger Information System, enabling them to remain in service into next year.

The first Class 91 to be withdrawn, No 91108, was planned to finish its duties on 22 July, but was reinstated due to locomotive failures caused by the hot weather that week and in fact worked its final services eight days later. The loco’s mileage meant it was due an examination and it will instead be used to provide parts for other ‘91s’. LNER expected to send another ‘91’ off lease at the end of August.

The operator is balancing the withdrawal of legacy fleets with the need to ensure it has sufficient stock available for a timetable enhancement from 9 September.

This will see the reinstatement of the two return London to Leeds workings withdrawn last August to reduce pressure on the fleet, along with the extension of the 12.30 and 14.30 departures from King’s Cross through to Edinburgh.

The introduction of Azumas on passenger workings into Scotland has been possible now Electromagnetic Compatibility (EMC) issues north of Doncaster have largely been solved.

Nine-car Azumas and pairs of five-car units are now cleared for operation under electric power to Edinburgh; Mr Doughty said the only remaining issue is with five-car operation between Newcastle and Edinburgh, with Network Rail working to find fixes to the issues, which are primarily concerned with level crossings.

While lineside installations by Network Rail are thought to be sufficient to mitigate the EMC issues, Hitachi has begun fitment of filters to the Azumas as an added contingency.

Each set is being fitted with two filters per motor car, meaning there will be 10 on a nine-car unit and six on a five-car. Priority is being given to the nine-car bi-modes already in passenger service, with fitment taking around a week for each unit. This work is being carried out at Eastleigh, where Azumas have been receiving post-production modifications; Hitachi’s aspiration is that in time the filters will be fitted before the sets are offered to LNER for acceptance.

Delays to infrastructure enhancements mean an overhaul of the East Coast main line timetable is now scheduled for December 2021, a year later than originally planned. This is set to include regular four-hour schedules between Edinburgh and King’s Cross along with two-hour timings between Leeds and the capital.

LNER is taking forward the enhancements planned under the Virgin Trains East Coast franchise, with the timetable set to include six trains per hour to and from King’s Cross plus a seventh in alternate hours (expected to be a London to Middlesbrough service). While the 65-strong Azuma fleet has capacity to operate the six hourly services, the fleet will not be large enough to add the additional half-train per hour required for the seventh service.

LNER is therefore examining options for expanding the fleet, with Mr Doughty telling Modern Railways: ‘The prospect of hanging on to some “91s” and Mk 4s for 18 months before we can use them again is probably not realistic any more so we’ll be looking at other options. We’ll have to look at whether we can get some more of these trains (the Azumas) or other trains. We’ll look at all those options.’ 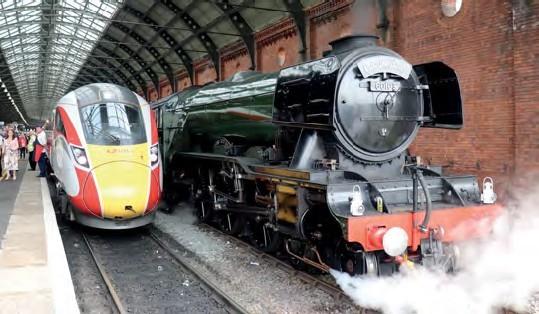 Azuma meets Flying Scotsman: No 800113 alongside its forerunner at Darlington on 30 July following the preview trip from York. Philip Sherratt 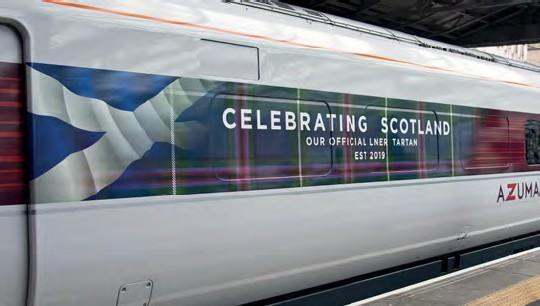 Scottish flavour: the specially designed LNER tartan displayed on No 800104 at Edinburgh on 31 July 2019. Tony Miles 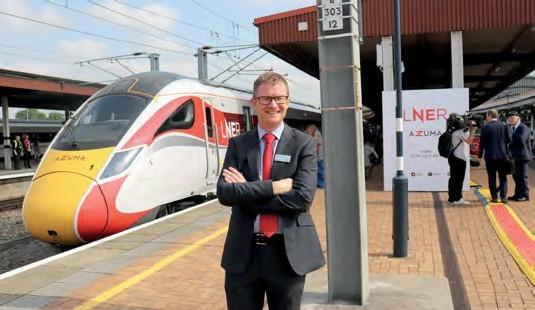