SNCF HOPES to start direct services between London and Bordeaux by 2022. The announcement was made by Diego Diaz, President, SNCF International, at an event to mark the twinning of London St Pancras and Bordeaux St Jean stations on 5 March 2020. 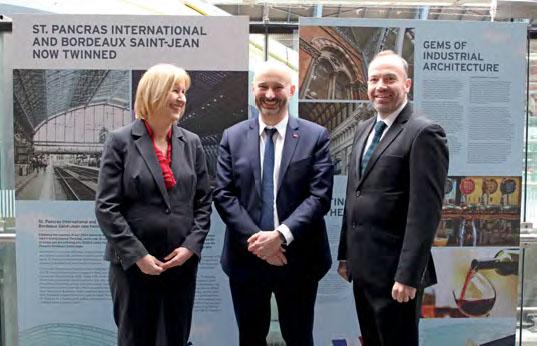 Development of a new route between London and Bordeaux has been the subject of a multi-year high profile lobbying campaign by the infrastructure managers along the entire route (HS1, Eurotunnel, SNCF Reseau and Lisea) and a formal feasibility study was begun in 2019 to address practical issues. Whilst there was no senior person from Eurostar speaking at the event, the fact SNCF as the majority owner of Eurostar made this announcement makes clear that Eurostar is undertaking the necessary planning. Eurostar is currently the only operator in Europe that has the trains and necessary licences to operate such a service.

To coincide with the twinning event, HS1 published research undertaken by Steer which suggests high-speed rail can attract 30% of the current air market for routes (like London to Bordeaux or Frankfurt) which have five-hour journey times. Currently there are around 15 million short-haul air trips annually to and from London on routes that could be served in five hours by rail, illustrating the market potential. Keith Fender