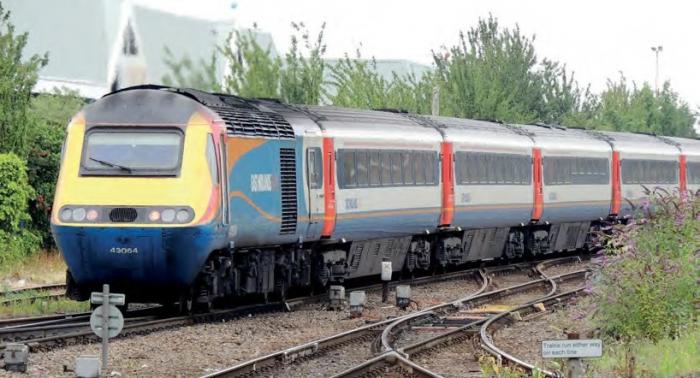 Paxman proposal: Colchester-based MAN is offering to uprate the VP185 diesel engines in the East Midlands Trains HST power cars from 2,250hp to 2,400hp. This would enable them to work with Mk 4s cascaded from the East Coast main line, which are heavier than the current Mk 3s, to meet Passengers with Reduced Mobility regulations. Here a down EMT HST leaves Leicester on 13 August 2015.
Steve Hobson

The sub-national transport bodies are England’s Economic Heartland, which broadly covers the Oxford to Cambridge corridor, and Transport for the South East, which represents a region stretching from Berkshire to Kent. The government says the funding will enable the bodies to develop ‘innovative transport plans fit for the future of their regions’ and will allow local people ‘to influence government investment decisions at a more regional level, filling the existing gap between national and local transport authorities’. Both bodies are seeking to become statutory subnational transport bodies, emulating Transport for the North, which achieved this status in April this year.