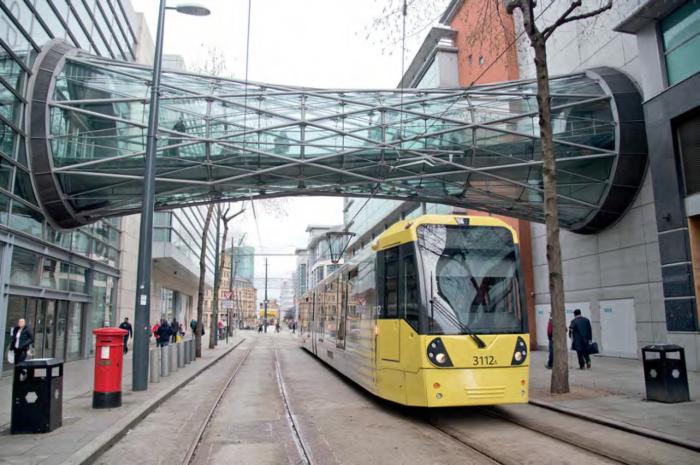 Second City Crossing open: tram No 3112 traverses the new section of route on the first day of passenger services, 26 February 2017, while running from Rochdale to East Didsbury. The vehicle is passing under the new bridge to the Arndale shopping centre that replaced the one destroyed by the 1996 IRA bomb; the post box at left is iconic as it survived the blast.
Tony Miles

The Second City Crossing runs from the Deansgate-Castlefield stop to a new stop at St Peter’s Square. It then runs along Cross Street to Exchange Square, and thence to Victoria where it rejoins the original cross-city route; the section from Exchange Square to Victoria was fast-tracked and opened in December 2015. Construction was carried out by M-Pact Thales, a consortium comprising Laing O’Rourke, VolkerRail and Thales, while TfGM’s delivery partner was WSP Parsons Brinckerhoff. Metrolink is operated by RATP Dev, although a new 10-year concession let to a consortium of Keolis and Amey is set to begin in July this year.

The new 1.3km stretch gives Metrolink a second route across Manchester’s city centre, providing additional capacity for the expanding network. The ‘big bang’ programme has seen extensions opened to East Didsbury, MediaCityUK, Rochdale, Ashton and Manchester Airport. Metrolink is now the largest light rail system in the UK, covering over 60 miles of track and serving 93 stops. A further extension to Trafford Park has been approved, and is planned to open in 2020 or 2021.

The opening has heralded a change in service patterns across the Metrolink network. The Second City Crossing route is served by trams from East Didsbury to Rochdale (with some terminating at Shaw and Crompton), while services from Manchester Airport now operate through to Deansgate-Castlefield; these are planned to extend to Victoria later this year. Other cross-city services continue to use the original route via Market Street.