MK 5As DUE LATER THIS YEAR 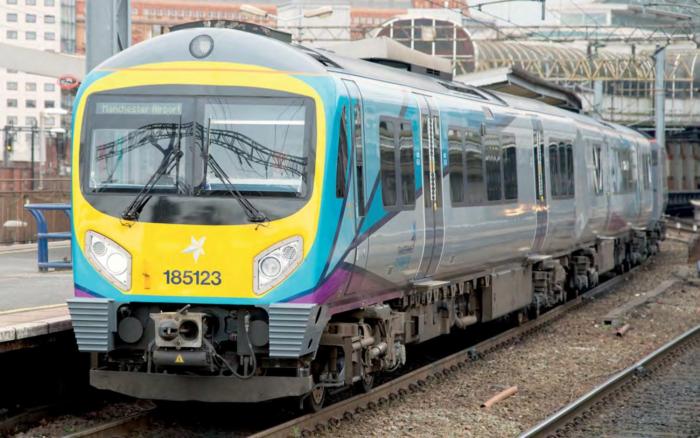 Set to be equipped with Wi-Fi: unit No 185123 at Manchester Piccadilly on 1 April 2016, while working the 09.06 Glasgow Central to Manchester Airport service. Tony Miles

UPDATING STAKEHOLDERS at the end of 2016, TransPennine Express said the first of its Mk 5A coaches, to be built by CAF and hauled by Class 68 locomotives, is expected to be delivered and in testing later this year ahead of introduction into passenger service in 2018.

The fleet of 12x5-car Class 397 EMUs, also being constructed by CAF, is due to begin delivery in the spring of 2019. These will take over the Manchester-Scotland trains as well as the new service between Liverpool and Scotland; first entry into passenger service is planned for the summer of 2019.

The first of the 19x5-car Hitachi AT300 bi-mode trains are also due to enter service in the summer of 2019. Following some disappointing feedback on the IEP trainsets procured by the Department for Transport, TPE told stakeholders: ‘The IEP was clearly designed by the person who came up with “50 Shades of Grey”; we’re not having 50 shades of grey in the TPE sets when we’ve branded them, and we look forward to some competition with the operators of the IEP as to who has got the best-looking fleet’.

Refurbishment of the existing fleet of Class 185 DMUs is due to begin shortly, with the aim of giving them a new look that will bring the standard of accommodation close to that planned for the new fleets of trains. TPE will be fitting Wi-Fi to all its Class 185s and also its 10 Class 350 EMUs, along with media servers to allow the streaming of the latest TV box sets and movies to phones, tablets or laptops; both facilities will be offered free of charge to all passengers. Tony Miles