ELECTRIFICATION OF the Gospel Oak to Barking route in north-east London has been delayed, and more blockades of the line will be required, likely including a further full closure later in the year

Network Rail says the delay is due to incorrect designs to a number of the structures carrying overhead lines, meaning they couldn’t be installed at planned locations. Late delivery of materials and structures has also been blamed for causing further delays. The line’s user group reported that as of early February works still to be completed included platform extensions at a number of stations, erection of masts, fitting out of masts with support arms, installation of overhead wires, repairs to a damaged sewer in Walthamstow and the raising of Crouch Hill road bridge, where there has been found to be insufficient clearance.

The route has been completely closed since September 2016 for electrification work, which in turn followed a partial closure for a further three months since June. The intention was to complete installation of all overhead wires prior to the line’s reopening on 27 February and to then test and commission the wires by the ‘infrastructure ready’ date of June 2017, but NR says it is now unlikely that this date will be met. 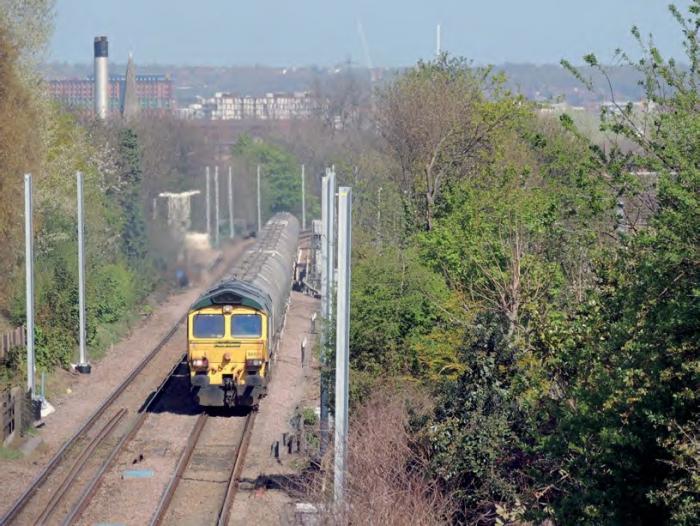 Wires on the way: loco No 66603 passes newly-erected masts at Harringay Green Lanes on 20 April 2016 as it heads a West Thurrock to Tunstead Sidings empty cement train. Antony Guppy

The line will reopen to passengers as planned, and NR says that ‘a robust plan’ is being put in place to complete the work before new Bombardier-built four-car Class 710 EMUs are delivered in early 2018. In addition to a further full line closure to complete the work, a series of weekend closures will also take place.

The closure of the route was necessitated chiefly by the large number of over line structures which require modifications to accommodate overhead wires. The £133 million project will enable Transport for London to replace the current two-car Class 172 DMUs with four-car EMUs.