ROUTES AND REGIONS IN NEW STRUCTURE THAT SHRINKS CENTRE 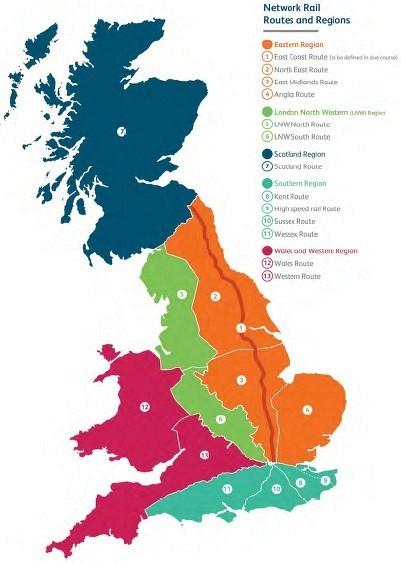 NETWORK RAIL is proposing to reorganise into a new more deeply devolved structure based on Routes and Regions. The move follows new Chief Executive Andrew Haines’ 100-day review of the organisation and is designed to develop stronger engagement with customers. NR’s centre is set to shrink to enable what the company describes as ‘a huge shift to a service culture’, creating greater alignment to franchises to better join track and train and reverse poor performance.

The new operating model will be formed of 13 Routes, supported by five Regions, two service directorates and smaller teams at the centre. The five Regions will be Scotland, Wales & Western, London North Western, Southern (comprising the current Wessex and South East Routes) and Eastern (comprising the current London North Eastern & East Midlands and Anglia Routes). Route Directors will be appointed to lead each Route and Managing Directors appointed to lead each Network Rail Region. Routes will be responsible for day-to-day delivery of train performance and will own the relationship with the relevant train operators in that area. Mr Haines’ aim is to create organisations large enough to absorb further devolution, increase route capabilities locally as well as to improve relationships with customers and stakeholders.

Devolution will also see NR’s Infrastructure Projects division abolished as an entity and devolved, alongside elements of the System Operator, Safety Technical & Engineering and Group Digital Railway functions. This will occur on a phased basis until the end of 2020, as and when NR is confident the Routes/Regions are in a position to receive them.

Route for Freight and National Passenger Operators as well as elements of Group Digital Railway and certain national services. NR says it will provide assurance for national operational performance and co-ordinate national programmes and capability.

Route Services will continue to provide business services that benefit from economies of scale and supporting services that are more efficiently managed at a national level. NR’s finance, HR, communications, legal and property functions will be largely unaffected at this stage.

The news signals the start of trade union consultation on the changes, with detailed organisational design to follow.

Mr Haines said: ‘The need for radical change is clear. Performance is not good enough and my comprehensive discussions with partners, passengers and politicians up and down the country have made clear to me the things we do well and the areas where we need to improve. Devolution has to go much deeper to enable us to get much closer to our partners and customers and be in a much better place to put passengers first and deliver for business too. The changes I’m announcing today are designed to do just that.’

Modern Railways Industry & Technology Editor Roger Ford commented: ‘This is a Fiennes for the modern age’.