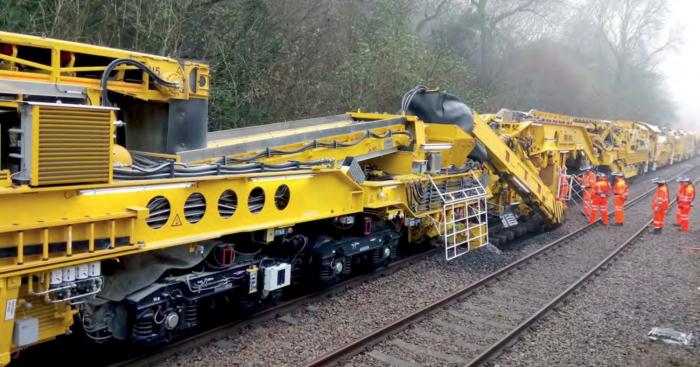 NETWORK RAIL’S High Output Track Renewals (HOTR) fleet is the third largest of its type in the world. Two track renewal machines (TRS, which renew rail and sleepers) and five ballast cleaners (BCS), over 400 vehicles in total, are employed across the UK network within the tight possessions afforded during service shutdown, handing back routes at speeds of up to 125mph. The aim is to carry out 70% of plain line track renewals using High Output (HO) equipment; some work still has to be done conventionally – HO equipment can’t work around tunnels or platforms, for example.

The HOTR team has received a boost with the delivery of NR’s fifth ballast cleaner from Plasser & Theurer. The first HO ballast cleaner (BCS1) was delivered during the Railtrack era, and the HOTR programme began in 2004. Each subsequent ballast cleaner has taken advantage of technological developments, and the latest, BCS5, has been purpose-built for use on the third rail sections of the network.

The wagons for BCS5 arrived at Carlisle Kingmoor depot in summer 2016, and during the autumn the train underwent testing at NR’s High Marnham facility in Nottinghamshire, where a 1,000-yard length of third rail track has been installed for this purpose. Most of the consist began work on the network out of the Taunton base on 7 January, but BCS5 will move to a new High Output Operational Base (HOOB) at Ashford in April, from where it will work on the third rail network for the following two years.

BCS5 has been built to a bespoke design and is the only machine of its type in the world, although even BCS1, the first machine, was bespoke to an extent due to the need to conform with the UK’s limited loading gauge.

The unique features of BCS5 to adapt it for third rail use include the provision of a longer cutter bar and rollers to hold the conductor rail in place while the machine is working. Prior to its arrival, renewals on third rail sections would either be carried out conventionally or by adapting techniques with the older machines.

Other more general benefits of the new machine include improved environmental credentials – diesel particulate filters have been fitted to all engines, generators have been removed from the material handling wagons, wagons have auto idle and auto off facilities to reduce generator noise, while the working environment for operatives is better with improved dust suppression and pressurised cabs to cut noise. NR also says that BCS5 offers improved maintainability, thanks to the input it provided into the machine’s design.

The ballast cleaning train is the longest on the network, at up to 815 metres in length. At the centre is the ballast cleaner itself. Ahead of it are empty MFS wagons to take ballast which is no longer fit for purpose, while behind it are loaded wagons with new stone ready to replace it: this is gradually cascaded forward through the train as it is used. The consist is top and tailed by Class 66 locomotives, both of which are manned to increase flexibility, while the use of a second loco can also assist with propelling the train up steep gradients. However, these locos are usually isolated while the train is working, with the slow forward propulsion provided by the two power wagons.

Ballast is first scooped up and sieved to check its condition – larger pieces can generally be returned to the track bed but contaminants are removed. The general aim is that 40-50% of stones be reused, although this varies depending on the condition of the railway being worked on (for example, soft London clay below the track will likely lead to a higher rejection rate), as well as the level of use of the track and its age.

The machine then calculates how much new stone it needs to supply to replace the rejected ballast, and after it has poured this onto the track bed the consolidation machine tamps, repositions and stabilises the track. Operation of the train can be undertaken from one cab, where computer screens show operatives how much material is in each wagon. An individual tamper may follow behind the ballast cleaner to revisit certain areas, particularly the entry and exit points for the HO trains, ensuring a smooth transition.

Each train can carry between 800 and 850 tonnes of ballast, with capacity to remove a similar amount of rejected stone. If all stone is rejected, all 22 wagons can be filled in as little as one hour, but in practice the teams usually run out of time before they do material.

The ethos of the HOTR programme is to minimise passenger disruption, work safely and minimise the risk of overruns. Considerable amounts of planning go into the programme, typically starting around 12 months before the work itself takes place. The programme is often planned around other works; for example, over six weekend possessions in Anglia (which were required for Crossrail works) the team completed 8½ miles of track renewals. Preparatory works can include creating temporary crossings for cables so that they are not damaged by the equipment, and informing local residents of when work will be taking place, as the machinery is noisy.

Prior to the introduction of the HOTR programme, track renewal rates were typically 100 metres per hour with both lines closed, but the HO machines can work at 400 metres per hour with the adjacent line open (albeit with a 20mph speed restriction). The biggest challenge is securing possessions, and these are usually severely time constrained. This means that the HO fleet is deployed for all 12 months of the year, whereas on the Continent, with longer shifts, equivalent fleets are used only for eight or nine months; NR sees itself as a specialist in delivering works during short time periods.

Previously, all six of the HOTR machines would typically be operating each night, so BCS5 adds flexibility to the fleet as well providing the third rail capability. The fact that track renewal machines work faster than the ballast cleaners and that modern sleepers have a longer life than ballast accounts for the balance of machines in the fleet.

The HOTR team has handed back sections of track at speeds of up to 80mph since 2006. The team is now stepping up the number of handbacks at 90-100mph, and on a section of the East Coast main line between Doncaster and York a handback at 125mph was successfully achieved. There is a trade-off here – handback at a higher speed requires more detailed checking of the infrastructure, so there is a productivity balance to be struck, depending on what impact the imposition of a temporary speed restriction may have in a particular location.

In March 2015, NR insourced delivery of HOTR from contractor AmeyColas, and delivery now sits in two parts of NR’s organisation: programme management and implementation is in Infrastructure Projects (IP) and plant maintenance and deployment in Route Services. In total, this core team totals around 600 people, supported by a supply chain of approximately 600 more sourced from a small number of suppliers, most of whom directly deliver works on track. When the on-track machine division moved back into the NR organisation in April 2016, the company became the UK’s newest train operator, and now has around 20 qualified drivers for the HO trains. 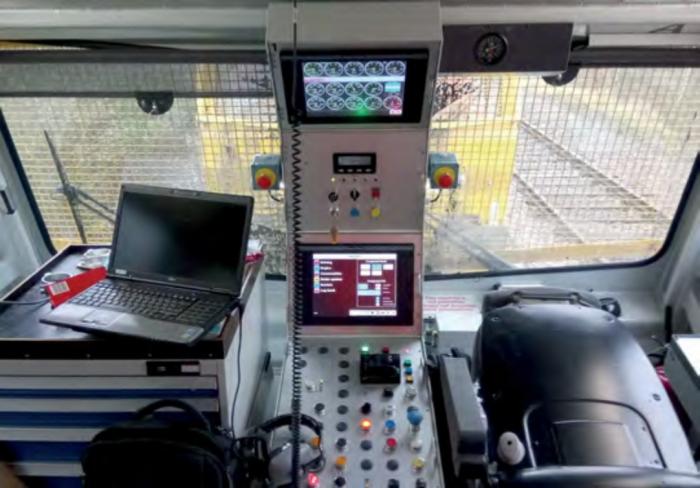 Hi-tech controls: the ballast cleaner is operated from this cab, which is noise insulated. Philip Sherratt 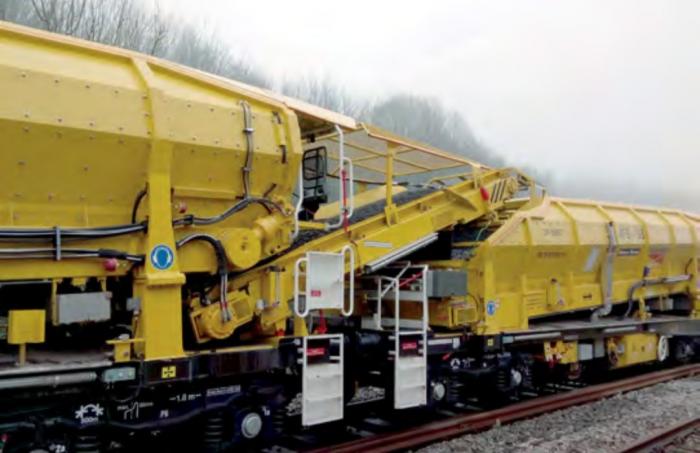 MFS wagons: note how ballast or spoil is cascaded through the train. Philip Sherratt 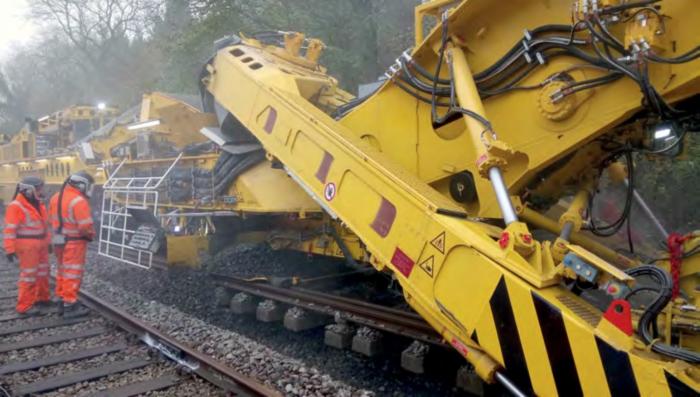 On test: operators supervise the replacement of ballast. Philip Sherratt