RECENT PROGRESS with new fleets ordered by West Midlands Trains has included the beginning of network testing with the first Class 196 DMU and the transfer of a Class 730 EMU to the Velím test track in the Czech Republic. 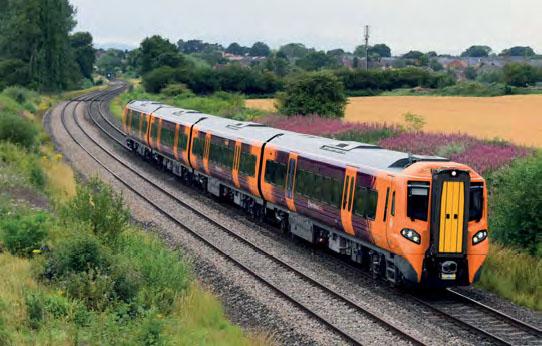 ‘196’ on test: No 196101 passes Ladywood in Worcestershire on 23 July 2020, the first day of on-network testing, with the 5Z38 Hereford to Tyseley depot working.
Steve Widdowson

WMT has ordered 12x2-car and 14x4-car Class 196s from CAF, and four-car unit No 196101 began testing on 23 July. This unit was built at CAF’s Beasain plant in Spain and was delivered to Tyseley depot in April. The majority of the ‘196s’ are being built at CAF’s Newport factory in south Wales, and vehicles from No 196104 were delivered from Newport to Tyseley by road on 24 July. WMT says the ‘196s’ will enter service ‘in the year ahead’, initially on services from Birmingham to Worcester and Hereford, although they will eventually work to Shrewsbury as well.

WMT’s order for Class 730 EMUs from Bombardier comprises 36x3-car units for the Cross City line in Birmingham and 45x5-car sets for London Northwestern-branded services on the West Coast main line. The Cross City units are being built first, with No 730001 dispatched to Velím in late July and the second unit also complete at Bombardier’s Derby factory, where testing and commissioning activities will take place. WMT says No 730001 is expected to return to Britain in October. Service entry for the ‘730s’ is planned for mid- to late-2021 and into 2022.

Meanwhile, WMT has awarded a contract to Wabtec Rail for a C4 overhaul of nine Class 323 EMUs, the units the ‘730s’ will replace on the Cross City line. The programme will commence in September and be completed towards the end of 2021, with the option to add a further two units at a later stage. Various departments within Wabtec’s Doncaster facility will be involved in the project, with Wabtec’s Faiveley Transport Birkenhead arm supplying many of the components.