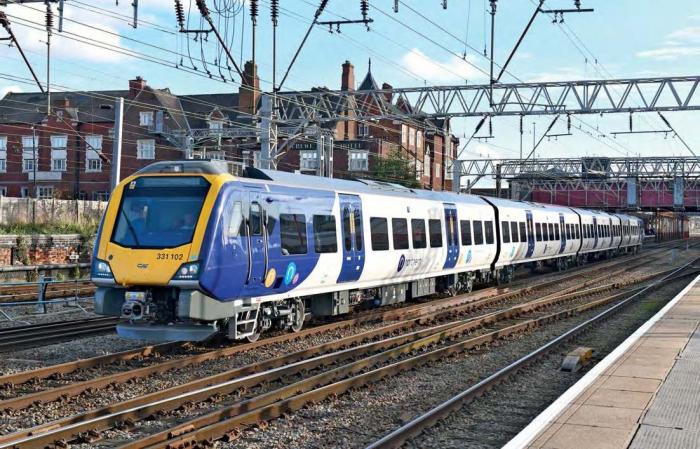 ARRIVA RAIL North has reacted strongly to suggestions made in The Sunday Telegraph that it is ‘locked in crisis talks with the Government’ over the future of the Northern franchise.

The story, which appeared on 4 November, suggested that following strikes as part of the longrunning dispute with the RMT and the diiculties with services following the May timetable change the company is trying to ‘renegotiate terms’ as inances have been ‘crippled’ by unprecedented levels of disruption.

The report stated a reply to a Parliamentary question by the then rail minister Jo Johnson had shown that in the year to March 2018 the subsidy to Northern had risen to £282 million, from £279 million the previous year. This contrasts with the announcement at the start of the franchise that the subsidy to Northern would fall by an average of £16 million annually. Mr Johnson’s answer also conirmed that after delivering a small premium payment in 2017 TransPennine Express had also received a subsidy in the year to 2018.

Responding to the story, which was repeated in other outlets, a Northern spokesperson stated ‘We are delivering on all of our commitments and are investing more than £600 million to transform local rail in the North – with new trains, better stations, more services and faster journeys for our customers. This is the biggest investment into rail in the North in a generation. But the franchise has faced a number of exceptional circumstances, notably the ongoing, late delivery of infrastructure upgrades. These delays were out of our control and have impacted growth in passenger numbers. As is standard practice, we are in constant dialogue with the Department for Transport about how to improve journeys for customers in the North.’

In recent months both Northern and TransPennine Express have told Modern Railways that delays to the completion of infrastructure projects, such as the Bolton line electriication, cancellation of others including the Windermere line electriication and ongoing uncertainty about schemes including the additional platforms at Manchester Piccadilly would clearly require renegotiation, as these formed part of the DfT’s commitments detailed in the franchising process. In May, with the state of several projects still uncertain, one senior insider noted ‘We will obviously need to renegotiate, but at this point we don’t know what we will be negotiating about’. Insiders explain that when the franchises were let bidders will have been issued with an ‘Infrastructure Assumptions Document’ by Network Rail, detailing the main infrastructure changes bidders were to assume would be delivered and by when.

Much of this information would also have been included in the Invitation to Tender (ITT) and the ine details, which may have changed during the bidding process, agreed in the Franchise Agreements signed with both franchisees. Any problems with this delivery, or caused by its delivery, would become a series of ‘Events of Change’, which then required the DfT to remodel the franchise agreements to assess the levels of compensation which are due. Whilst the extent of the DfT’s liabilities over some issues is still uncertain, it is understood the instruction to cancel the December 2018 timetable changes, which came from the DfT, will have been accompanied by a ‘letter of comfort’ conirming this decision is a ‘Change Event’, enabling the operators and DfT to rerun the bid models and conirm the compensation which is due. Tony Miles

Explosion of the zombie franchises, p30