THE THIRD and final new train fleet being procured by TransPennine Express entered passenger service on 30 November 2019 when Class 397 ‘Nova 2’ set No 397007 worked the 08.10 departure from Manchester Airport to Edinburgh. The journey was not without incident as an overhead wire fault south of Carlisle saw the set held at Preston for almost an hour before the route was reopened. With many other trains cancelled the capacity of the five-car unit was tested to the full as it arrived in Edinburgh carrying what was estimated to be between 500 and 520 passengers. The late southbound departure and a minor technical issue at Carlisle on the return journey saw it terminated at Preston in order to take up its return northbound path on time. 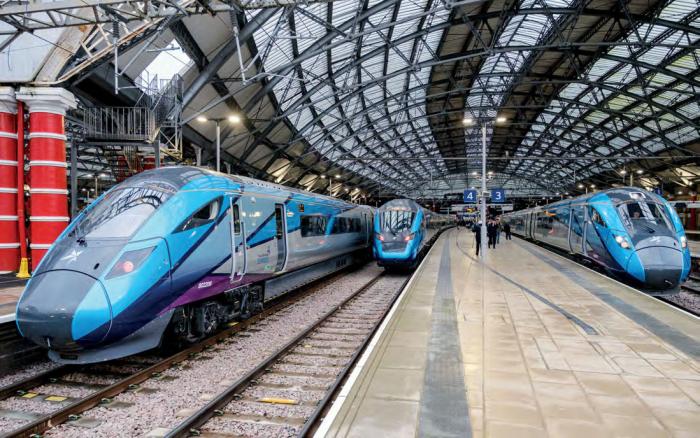 TPE has ordered 12x5-car Class 397s from CAF to operate its Anglo-Scottish services via the West Coast main line. Entry into service of the ‘397s’ is significantly behind schedule due to late delivery by the manufacturer and a protracted period of testing and acceptance. However, deployment is now critical as TPE starts to release its 10 Class 350 EMUs to West Midlands Trains. All 10 were due to be released for the December timetable change but agreement with WMT for a phased handover saw four sets transferred by the first week in December as Nos 350404/405/410 joined No 350401, which moved to its new operator at the end of August. The other six units will transfer in two groups of three towards the end of January. As well as the two initial Nova 2 diagrams a Class 185 has been allocated to Anglo-Scottish services to provide short-term cover. 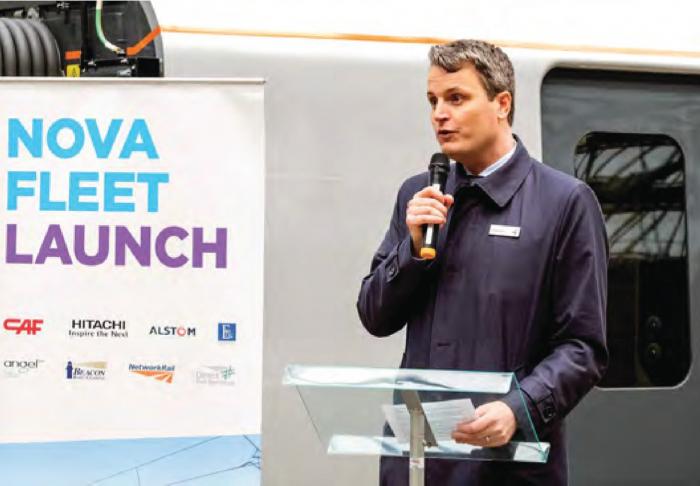 The Nova 2 units provide 286 seats, which TPE says is an additional 105 compared to the units they will replace. The company points out that 60% of the seats area arranged around a table in a bay and all standard class seats align perfectly with the windows. Other features include real-time information provision, on-board Wi-Fi and media servers, power sockets at every pair of seats and an electronic seat reservations system with lights for each seat showing green (seat free), yellow (seat partially reserved) and red (seat fully reserved) for ease of identification. The units are maintained under contract by Alstom at its Manchester Traincare facility.

The delay in the new fleet arriving has led TPE to alter its plans for its new Liverpool to Glasgow service, which launched at the December timetable change. ‘Liverpool to Scotland has launched with Class 185 DMUs as we don’t have the additional sets from CAF that we need for the service’ TPE’s Programme Manager Chris Nutton told Modern Railways. ‘As the “350s” pass out it is planned that the Nova 2 Class 397s will go in to replace them. Then Liverpool to Glasgow transitions last; the slightly smaller DMUs should match initial demand as the service is starting from scratch. Nova 2 introduction is being focused initially on the Manchester Airport to Scotland trains which are already very highly loaded.’

The Nova 2s entered service shortly after TPE formally launched its three Nova fleets at Liverpool Lime Street on 22 November. Four days later stakeholders in York were also able to see the new trains that will be seen regularly on services to the north east.

Programme Manager Chris Nutton explained that TPE’s focus is on introduction of the Hitachi-built Nova 1 trains at the moment, in spite of this having been the last fleet planned to enter service. The move is driven by the extension of TPE services between Liverpool and Newcastle to Edinburgh via the East Coast main line at the December timetable change. ‘We are training the traincrews in Scarborough on Nova 3 sets but at York there’s a huge demand for training staff on the Nova 1 fleet’ he said. ‘In order to get the right balance between the amount of staff released for training and those required to deliver the existing train plan we’ve had to push back the Nova 3 activity.’

Mr Nutton also pointed out that continuing the resolution of some issues with the Nova 3 trains meant that TPE would only be able to operate four daily diagrams with the sets from the December timetable change. ‘We’ll be looking to expand beyond those four diagrams in the spring’ he said.

From the December timetable change TPE’s minimum Nova 1 requirement was for eight diagrams on the Liverpool – Newcastle – Edinburgh service group. ‘We’re reviewing beyond that where we can go, such as Manchester Airport to Newcastle, so there may be some incremental uplifts depending on where the crew training programme gets to and where Hitachi’s ramp up in maintenance and availability is’ Mr Nutton explained. ‘Given that the maintenance of the trainsets is at Craigentinny (in Edinburgh) as well as at Doncaster it’s absolutely imperative that we move forward with the links into Scotland both for commercial and customer reasons but also for logistical reasons for the train maintenance.’

■ Built and maintained by Hitachi

■ Operating Liverpool/Manchester to Newcastle and Edinburgh

TPE has recently experienced large numbers of cancellations due to train crew shortages, an issue that has been caused by the compressed rollout of the new fleets. To mitigate this impact once the December timetable launched, TPE confirmed some Liverpool to Newcastle/Edinburgh services would be cancelled until 5 January.

‘The 28 months that we envisaged for the rollout of the train fleet has been pushed right down to, effectively, a nine-month window prior to the timetable changing and only 3½ months since we started passenger operation’ Mr Nutton explained. ‘At the same time there are logistical matters like train storage and making sure we get a consistent pattern with train maintenance and activity on depots, this has all been very challenging given the earlier delays in the Nova programme.’

The delay to the new trains programme has required some short-term extensions to the lease agreement for the Class 185 fleet. Mr Nutton confirmed that discussions are ongoing with Eversholt Rail regarding the retention of an additional seven Class 185 sets in the long term, taking the TPE total to 44 out of the 51-strong Class 185 fleet.