A NEW fleet of three state-of-the art rail grinding machines has been unveiled by Network Rail. The machines will deal more effectively with containing the problem of rolling contact fatigue (RCF), which is the formation of cracks in the rail head that can lead to breaks in the rail itself if not treated in good time. The October 2000 Hatfield crash highlighted the problem of RCF, and dealing with the issue has been a priority ever since.

Preventative measures such as regular grinding of the rail head are seen as one solution, with one run being undertaken for every 15 million tonnes passing over curved track and 45 million tonnes passing over straight track. Railhead grinding will also be undertaken as a consequence of specific issues identified by the passage of the Ultrasonic Test Train. In addition to eliminating problems associated with cracks, grinding is also used to maintain the convex profile and curved inner edge of the railhead at the point of contact with the wheel flanges, which maximises the life of both the rail and wheels. 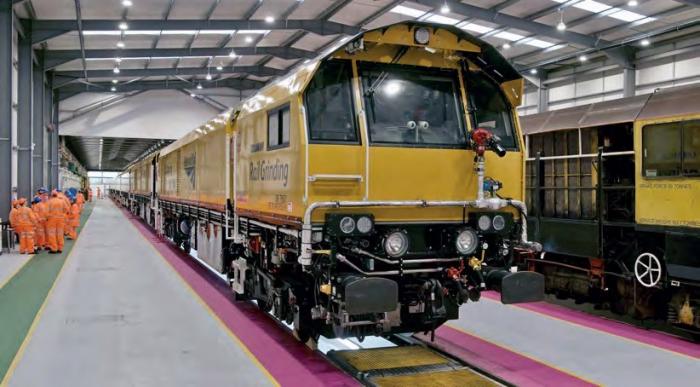 The new machines, costing £36 million, have been built by Loram at the company’s Minneapolis Works, and will replace existing life-expired equipment. Colas Rail has been awarded the contract to operate and maintain the fleet. The new machines have been developed by a team drawn from Network Rail (Route Services), Colas Rail and Loram, together with contributions from Aegis Engineering and the Network Certification Body. The aim is to deliver a more efficient fleet of grinding machines, both in terms of performance and costs. Of the three new machines, two (C44-01 & C44-02) consist of four vehicles each, while the third (C44-03) stretches to seven vehicles. They all are of a basic modular design, which will greatly improve maintenance, and with their Cummins Tier 4 engines will be able to move around the network more quickly due to their 75mph capability.

They also offer improved performance when grinding, being able to cover up to 20 miles of track in a shift, nearly twice the capability of existing equipment, while reducing the financial impact to Route customers by up to £1,000 in the same timeframe. The largest of the new units, C44-03, has just half the number of engines of its predecessor (C21-01) but can produce 10% more power. 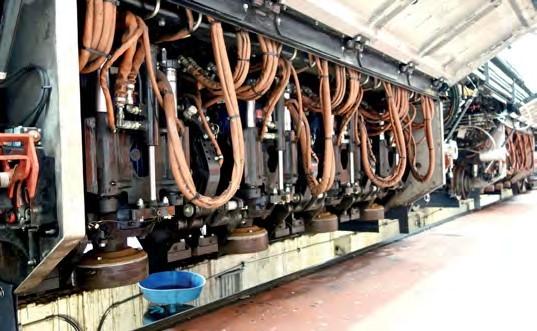 Additional features focus on safety, with the machines able to work within single bore tunnels thanks to evacuation facilities at each end. They can also work on third rail and overhead electrified track, and pressurised cabins provide a dust-free environment for staff as well as full welfare facilities.

A computer system provides the driver with the optimum means of delivery and stores information for future operations. John Whitehouse