TRANSPORT FOR London is evaluating bids from three train manufacturers for a new fleet for the Piccadilly Line. Part of the New Tube for London (NTfL) procurement, planned to cover also the Bakerloo, Central and Waterloo & City Lines, the intention is to introduce a new generation of deep level rolling stock featuring walk-through carriages and air cooling. Five manufacturers had been shortlisted to bid – Alstom, Bombardier, CAF, Hitachi and Siemens, with Bombardier and Hitachi now submitting a joint tender. TfL says resignalling work is due to start from 2020, with new trains arriving from 2023 and a new signalling and train control system in place from2026.

Meanwhile, TfL is conducting a review into a prevalence of wheel flats affecting the current Piccadilly Line fleet of 1973 stock trains during November and December 2016. Over a four-week period trains were taken out of service to undergo repairs, meaning a greatly reduced service operated. An independent company has been appointed to carry out the investigation, and an interim report was due by the end of February with a final report following in April. 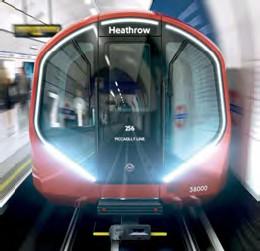 New Tube for London: the Piccadilly Line is earmarked as the first set to receive the new stock.

On the Victoria Line, replacement of track circuits at Northumberland Park depot over the Christmas period forms a precursor to the introduction of an enhanced frequency of 36 trains per hour from May this year, as opposed to the current 34tph. Further modifications to the signalling system ahead of the change are due to be completed at Easter.

The Jubilee Line’s 1996 stock fleet is presently receiving modifications at Stratford Market depot in East London. The renovations will provide improved accessibility for disabled customers through installation of wheelchair bays, poles, exterior door steps and ensuring contrasting colours in floors and handrails. There will also be better passenger information and emergency alarms; work is due to be completed by the end of August 2019. Plans to increase the frequency on the Jubilee Line to 36tph remain on target for 2020; replacement work for the crossover at West Hampstead was due to be completed by the end of February.

Refurbishment of the Bakerloo Line fleet of 1972 stock trains is also proceeding. This primarily concerns work to the underframes, with two trains at a time being treated in priority order depending on condition. The work will include installation of new flooring in contrasting brown and beige to make it compliant with accessibility regulations. Work to fit new seat covers to the 36 trains is nearing completion.