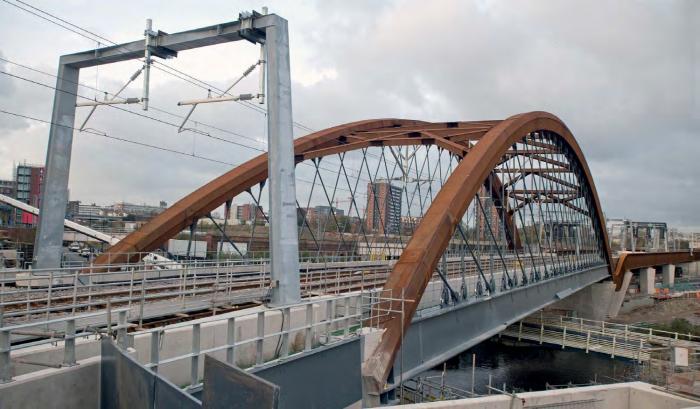 Network arch bridge: Ordsall chord as viewed from the Deansgate / Water Street Junction end on the day of the formal opening by Rail Minister Paul Maynard, 9 November 2017. Note distinctive overhead structure, designed to blend in with the cityscape. Tony Miles

Completion of the two-year Ordsall chord project was marked on 9 November 2017 in Manchester when Rail Minister Paul Maynard installed the final rail clip onto the new piece of rail infrastructure. The new chord enables trains to run from the north east into Manchester’s Victoria station and then through Oxford Road and Piccadilly stations and on to the south of the city to Manchester Airport. This avoids the need for these services to cross the station throat at Piccadilly and reverse to reach the airport, as they did with the previous eastern approach to the station, thus releasing capacity for more services to serve Piccadilly in the future.