AT AN event on 10 August, Orion High Speed Logistics displayed to the press a Class 319 that has been converted for parcels transport by Arlington Fleet Services at Eastleigh works. The train is the first of an initial fleet of three units that Orion, a sister company of empty stock mover Rail Operations Group, is planning to introduce into service early next year. The other two units are being converted into parcels Class 769s, with the addition of diesel engines at the Brush plant in Loughborough.

The plan is that the units will operate as eight-car trains shuttling between the port at London Gateway and Liverpool Street station in central London. The ‘319’ will run in tandem with a Class 769 sister unit, with the latter acting as a tractor unit on the unelectrified Gateway branch.

At Liverpool Street, the trains will use platforms 9 and 10, which have road access, with electric bikes and electric vans shuttling the parcels to city centre destinations to add to the operation’s green credentials.

The first service is likely to leave Gateway around 04.00, allowing platform occupancy at Liverpool Street before the morning rush hour. Paths have been identified for two more services, in the middle of the day and the evening. ‘Eventually, we plan to move to three round trips a day, seven days a week’ says Paul Orchard, Orion’s MD. ‘We’ll be taking diesel vans off the A13: a good news story all round.’

Mr Orchard adds that with Class 321s and other passenger classes coming off lease, there is plenty of scope to expand the concept, with other routes being looked at including Gateway to Birch Coppice in the Midlands, and Daventry to Mossend.

Parent company Rail Operations (UK) Ltd intends to order 10 or more tri-mode Class 93 locomotives from Stadler to allow further expansion in high-speed freight. The order has been held up by changes in the leasing industry but was expected to be placed in September. 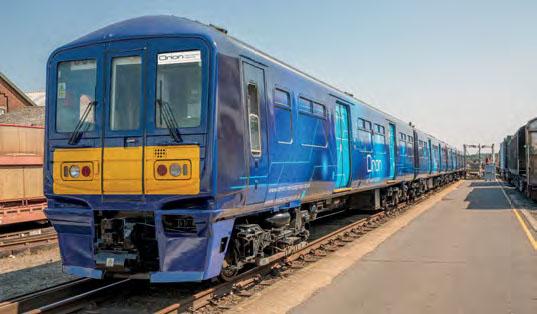 Ex-Northern unit: the Class 319 demonstrator was in service as a passenger unit in the North West and has been refitted with third rail equipment by Arlington Fleet Services to give maximum flexibility.
Ken Brunt 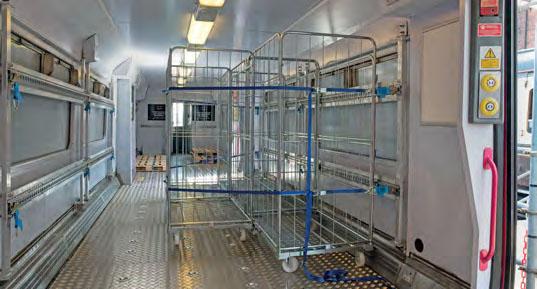 Just like a road vehicle: the demonstrator Class 319 has been fitted out with wall brackets to which roller cages can be secured.
Ken Brunt