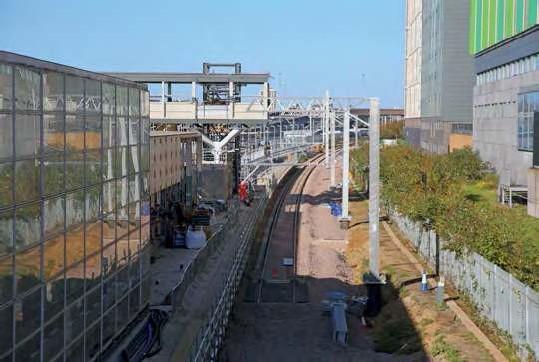 Expanding the asset base: new platform under construction at Tottenham Hale on 22 October 2018 as part of the Lee Valley upgrade project. Jamie Squibbs

A TOTAL of £24.3 billion will be spent on maintaining and renewing the railway in England and Wales during Control Period 6 (2019-24), as the Oice of Rail and Road has set out its inal determination on Network Rail’s plans for the funding period.

The document forms part of the Periodic Review process determining what Network Rail should deliver during CP6. NR must choose whether to accept ORR’s inal determination and will then publish its delivery plan for the period next March.

Unlike in previous Control Periods, ORR’s determination of NR’s income is limited to Operations, Maintenance and Renewals (OMR) expenditure, with enhancements to be speciied and funded separately by the Department for Transport or Scottish Ministers. DfT’s England & Wales Statement of Funds Available (SoFA) includes funding for enhancements worth £9.2 billion, including schemes deferred from CP5. The Scotland SoFA includes £800 million for enhancements and other industry improvements. Both SoFAs will meet costs associated with risk and take into account Schedules 4 & 8 costs. For England & Wales and Scotland combined, expenditure will therefore total around £37 billion.

ORR has approved spending of £7.7 billion on maintenance and £16.6 billion on renewals in England and Wales, the latter igure being 17% higher than in the current funding period. The regulator has also conirmed NR’s plans for a signiicant boost in its timetabling and planning functions, with the System Operator’s forecast spend almost doubling to £270 million, enabling NR to employ around 100 extra staf.

In Scotland, ORR has allocated £715 million for maintenance and £2.1 billion for renewals. Other speciic measures include journey time improvements, a punctuality target of 92.5% and facilitating 7.5% growth in rail freight north of the border by the end of CP6.

A major change for CP6 will be the introduction of a new measure for train service performance, Consistent Route Measure for Passengers (CRM-P). This measures Network Rail’s contribution to the delays experienced by travellers, in terms of primary and reactionary delay minutes to passenger services caused by each Network Rail Route, normalised per 100 train kilometres.

The inal determination sets out the performance levels each Network Rail Route will be expected to deliver, in terms of its contribution to the delays experienced by passengers.

NR’s Strategic Business Plan for CP6 was developed on the basis of more locally-focused decision-making, with each of the eight geographic Routes having its own budget, delivery plans and scorecards. As part of the devolution process, each Route has its own Regulatory settlement for CP6; Table 2 shows the funding allocated to the England & Wales Routes. This drive is supported by the ORR, including the proposal for a new obligation on Network Rail ‘to enable the Routes to choose how to procure the goods and services they need’. Philip Sherratt/Roger Ford