Since its launch in 2007 the London Overground has barely stood still. One of the acclaimed successes of the modern railway, trains have been lengthened and a second new fleet is being delivered. All the while, maintenance practices have been adapted to keep up with developments.

The fleet management arrangement is essentially a tripartite one, with Transport for the London playing a co-ordinating role between operator Arriva Rail London and Bombardier, which holds a Train Services Agreement for maintenance of the Class 378 and Class 710 fleets. The legacy Class 315 and Class 317 fleets on West Anglia services out of Liverpool Street are also overseen. An agency agreement sees TfL devolve its responsibilities to ARL on a day-to-day basis. ‘It’s a tight relationship, closer than any contract I’ve worked on before’ says Paul Edwards, TfL’s Head of Fleet Management. 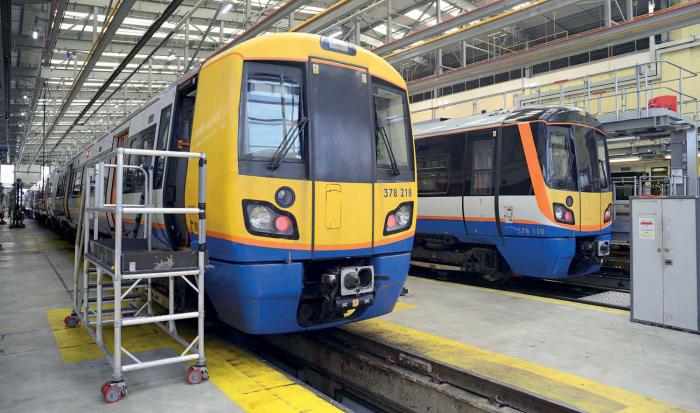 Contrasting liveries: No 378218 (left) wears the original London Overground colours and No 378150 the new; both were undergoing maintenance at New Cross Gate depot on 22 August 2019.
PHOTOS BY ANTONY GUPPY