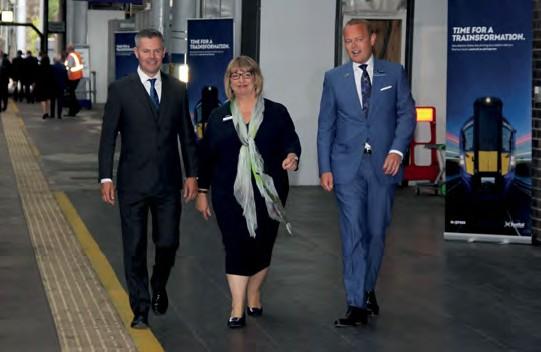 Greeting the new fleet: (from left) Scottish Cabinet Secretary for Finance and the Constitution Derek MacKay, Hitachi Rail Europe Managing Director Karen Boswell and ScotRail Alliance Managing Director Alex Hynes at Glasgow Queen Street on 23 July for the press preview trip. Mr MacKay was Minister for Transport and the Islands at the time the order for the ‘385s’ was placed.

ScotRail introduced the first Hitachi-built Class 385 EMUs into passenger service on 24 July on the Edinburgh to Glasgow route via Falkirk (the E&G route). The operator has ordered 46x3-car and 24x4-car EMUs for routes across the central belt, with the aim now being for all 70 units to be in service during the first half of next year. The fleet is being financed by Caledonian Rail Leasing Ltd, a Special Purpose Vehicle created by SMBC Leasing.

Initially only one diagram has been operating with ‘385s’ in a seven-car formation, with Nos 385104 and 385003 the first two units to be accepted for service. ScotRail planned to introduce more diagrams from September, once the Edinburgh Fringe Festival was over, with the aim then to introduce two units per week until all diagrams on the Edinburgh to Glasgow via Falkirk route are operated by ‘385s’ later this autumn; this will require 24 ‘385s’ in service each day.

However, ScotRail intends to continue accepting units at a target rate of two per week, with these initially to be used to support the operator’s driver training programme.

The ‘385s’ were originally due to make their debut on the E&G route in autumn 2017, but first delays to completing electrification and then issues with the initial curved windscreen design on the units have set this back. The first testing of ‘385s’ took place on the route last autumn, but in the early months of 2018 the windscreen issues emerged.

This design caused problems at night time, with drivers reporting seeing ‘ghosted’ second signals, and Hitachi subsequently fitted two possible replacement designs to unit No 385004, one of which was then approved. However, daytime running was largely not affected by this issue, enabling mileage accumulation with the new units to continue while it was resolved.

Fitment of the replacement windscreen design is taking place at Craigentinny depot in Edinburgh for units which had already been delivered to Scotland, and at Hitachi’s Newton Aycliffe factory in County Durham for the remainder of the fleet. Initially the new flat windscreen has only been fitted to the driver’s side of the cab in order to speed up acceptance of units, but it will eventually be fitted to both sides.

Hitachi reported that in late July 11 trains were in Scotland, with 21 at Newton Aycliffe undergoing testing or commissioning and a further 28 in the manufacturing process. More units were expected to move north soon after the fleet entered passenger service, with Hitachi aiming to produce one train a week at Newton Aycliffe.

A challenge has been finding space to store units in Scotland, with Craigentinny depot at capacity ahead of its transfer from LNER to Hitachi later this year. As part of this work the depot has been remodelled, and as well as being the main base for the ‘385s’ it will be a key maintenance facility for the LNER Class 800/801 Azuma fleet.

To cover for the delays with introducing the ‘385s’, ScotRail has hired in 10 Class 365 EMUs from Eversholt Rail which had gone off-lease from Govia Thameslink Railway. These were needed to cover for the transfer of four Class 170s and two Class 158s to Northern in February, followed by a further six Class 170s moving to Northern at the end of July. The ‘365s’ are operating on the E&G alongside ‘385s’, Class 380s and Class 170 DMUs, with ScotRail reporting an all-electric service on the E&G operated for the first time on 1 August. A further 19 diesel units are due to leave ScotRail for Northern in December, although ScotRail Managing Director Alex Hynes noted the decision not to introduce timetable changes at Northern may mean this cascade can be deferred. 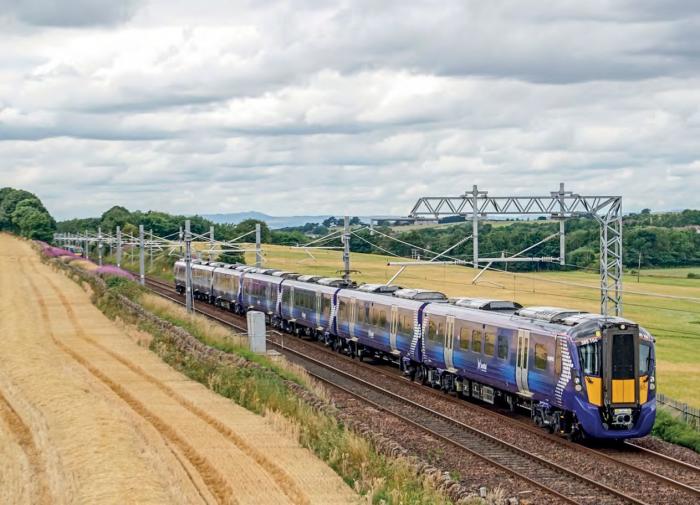 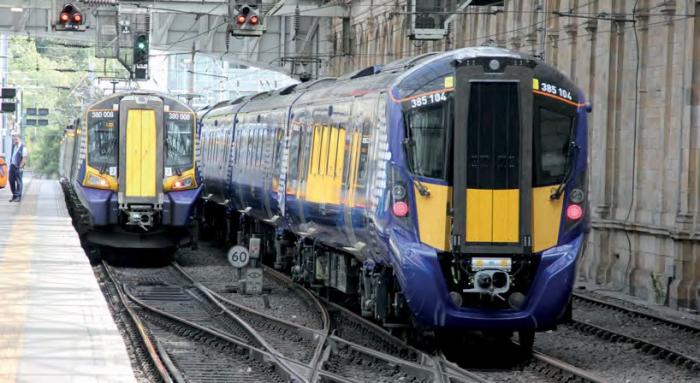 Electrics at Edinburgh: Nos 385104/003 leave Edinburgh Waverley for Millerhill depot after working a press preview trip on 23 July, passing No 380008 waiting to depart with the 13.43 to North Berwick. All photos by Ian Lothian unless stated 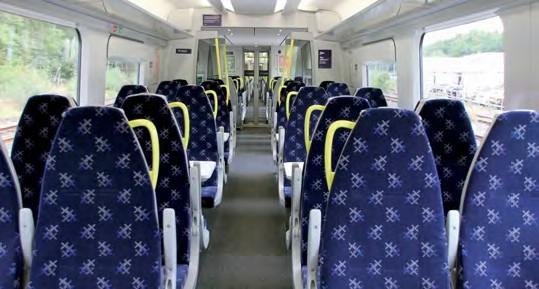 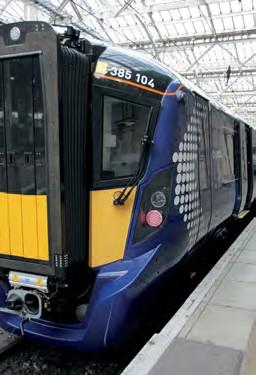 New windscreen: the approved design fitted to No 385104.

The next route to be electrified in Scotland will be the Stirling, Dunblane and Alloa (SDA) lines, which are due to be energised for passenger service in December. Mr Hynes told Modern Railways ScotRail’s working assumption is the ‘365s’ will then move from the E&G to these routes once the wires go live, where they will again be succeeded by Class 385s once sufficient units are available; ScotRail is leasing the ‘365s’ until May 2019. Class 380s, which operated the first electrified services on the E&G from December 2017, will return to their previous duties on Inverclyde services.

The electrification of the SDA lines will also enable ScotRail to accelerate some Edinburgh to Glasgow journeys to 42 minutes in December. This will be possible due to the improved performance of electric trains on both the E&G and SDA routes; the key obstacle has been pathing faster EMU schedules around the slower DMUs which currently operate SDA services. Eventually ScotRail aims for all E&G journey times to be reduced to this level, but this will not take place until next year. The introduction of eight-car Class 385 formations on E&G services awaits completion of work to lengthen platforms at Glasgow Queen Street station, now scheduled for 2020.

ScotRail will still make changes to its timetable in December, in spite of the move for other operators to roll over their timetables following the disruption that has occurred since the May changes, with senior figures noting the importance of taking advantage of completion of SDA electrification.

The remaining route in the central belt awaiting completion of electrification is the Shotts line, with ScotRail reporting this work is on course for completion by March 2019, after which this line will also receive ‘385s’.

ScotRail has given the Class 385s ‘Express’ branding. Four-car units have 273 seats and offer first class accommodation and will be concentrated on the E&G, while the standard class-only three-car units have 206 seats. The introduction of ‘385s’ alongside ‘365s’ has seen ScotRail reintroduce first class on the E&G, initially sold through on-board upgrades; this facility was temporarily withdrawn when Class 380s began working on the route last December. Other improvements offered by the new fleet include air conditioning, Wi-Fi and power sockets at each pair of seats. Transport Scotland’s Director of Rail Bill Reeve told Modern Railways ScotRail currently has a high market share on the Edinburgh to Glasgow corridor, but noted there is ‘more to be won’.

A cleaning team, dubbed the ‘Express Pit Stop team’ due to the time-sensitive nature of their role, will attend to each ‘385’ at both Edinburgh and Glasgow. The team will be equipped with backpack-style vacuum cleaners and microfibre window pads as well as a new sanitising cleaning fluid. ScotRail says amongst other areas the team will focus on keeping windows clean.

In addition to the ongoing redevelopment of Glasgow Queen Street station, ScotRail has replaced the former waiting rooms at intermediate stations with new lounges, while improved customer information screens have been installed along with additional ticket machines at Croy, Falkirk High, Polmont and Linlithgow.

In addition to the core order for 70 Class 385s there is an option to deliver a further 10x3-car units if Abellio is granted a three-year extension to its franchise by the Scottish Government, which would take the contract through to 2025. 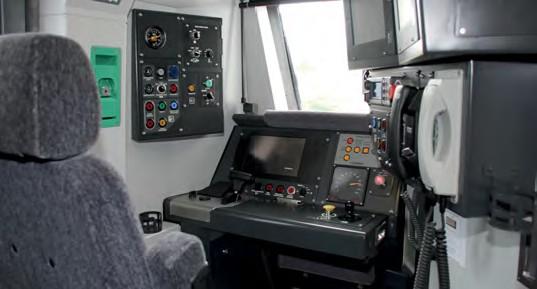 Cab view: driver’s controls in unit No 385104, complete with the new flat windscreen.