THE NUMBER of rail passenger journeys in Great Britain fell by 2.7% to 416 million in the first quarter of 2017-18, the lowest amount for two years.

The driver of this was a 4.5% fall in journeys in the London and South East sector, according to data from the Office of Rail and Road. This reduction was offset by increases in the long distance (1.5%) and regional sectors (1.8%).

Also driving the fall in journeys was reduced use of season tickets, which saw the lowest number of journeys in a three-month period for over four years. This was offset by increases in the number of journeys made on advance, off-peak and anytime tickets, which ORR says suggests a change in behaviour with people moving towards a more flexible ticket. The regulator says this is further evidenced by a 4.5% increase in revenue per journey as passengers switch from season tickets to those which have a higher price per journey.

Nationally, passenger kilometres increased by 0.3% to 16.3 billion. A 3.1% fall in the LSE sector was offset by increases of 2.7% in the long distance sector and 4.3% in the regional sector. The main driver of the decrease in LSE was South West Trains, which saw a 6.5% year-on-year fall in passenger kilometres.

Revenue from season tickets fell by 4.9%, the sixth quarter in a row that it has dropped and the largest reduction in that time. 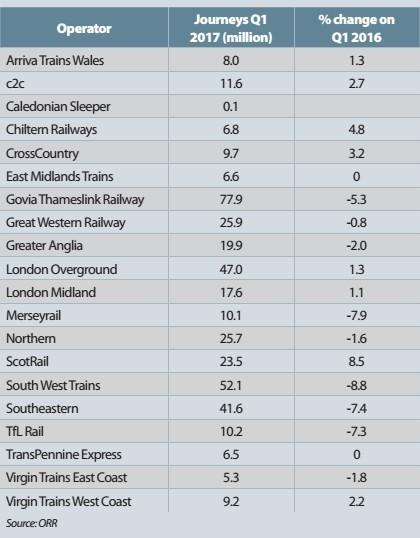