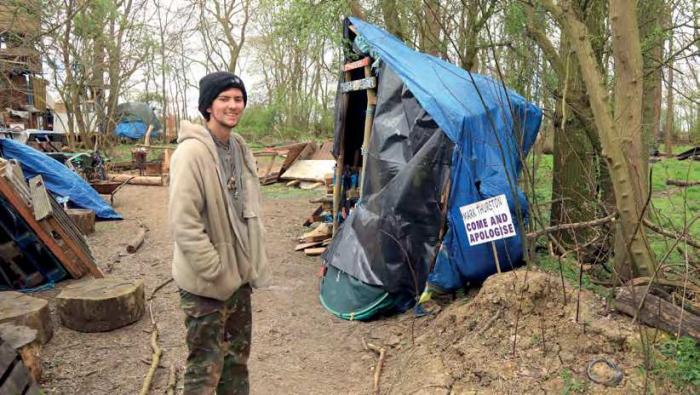 Taking a stand: Goldi at the Poors Piece camp near Claydon.
Phil Marsh

Protests against HS2 have been ongoing ever since the project began, most notably earlier this year when a group dug a tunnel under construction sites at Euston. A chance conversation with an anti-HS2 protester by the worksite at Calvert prompted a visit to the nearby Poors Piece protest camp, home to an articulate 21-year-old known as Goldi Locks. He joined the camp while on furlough, deciding to stay when his tree was surrounded by men with chainsaws.

The protest camp is at the east end of Claydon loop, fenced off from HS2 territory on land outside HS2’s requirements. The original camp, evicted by HS2, was in a field next to the current camp.

Goldi has never discussed his anti-HS2 campaign with anyone from the rail industry, prompting the big question – is climate change or HS2 the biggest threat? He outlined three concerns: that HS2 isn’t needed, that the wider industrial complex that HS2 is part of is exploiting people and land, and questioned why a tree is only valuable after being cut down.