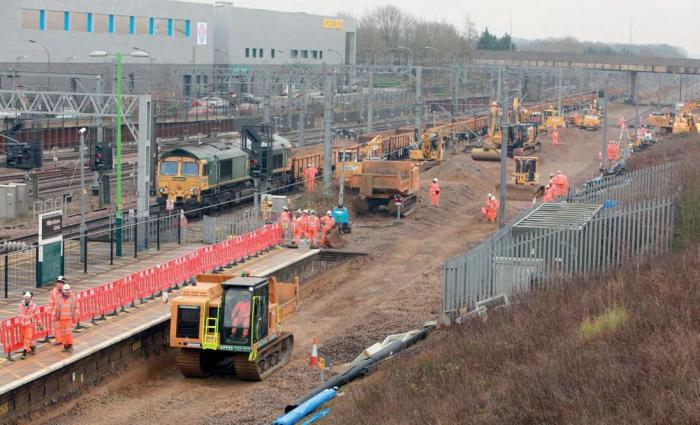 A 25,000-STRONG team worked for more than 380,000 hours to deliver 330 projects over the festive period. Major projects are typically undertaken over Christmas and New Year while usage of the network drops.

Network Rail reports that this year’s Christmas holiday works programme was valued at £148 million and most projects were completed on time; works at Westbury overran by a day.

In addition to overhead electrification works, the Western saw closures at London Paddington and Westbury for all or part of the festive period. Work at Paddington included track upgrades and station improvements, including the lifting into place of a new staircase at Ealing Broadway in preparation for Elizabeth Line services.

Over a 12-day period, work at Westbury included installation of new track, modifications to platforms and the moving of three signals to enable platforms to be lengthened to accommodate longer trains. The railway was due to reopen on 4 January, but a signalling issue encountered during commissioning the previous night led to the works overrunning, with services calling at the station again on 5 January.

Anglia was one of the busiest regions over the festive period. As part of an ongoing project, 12.5km of overhead wire was installed at Forest Gate on the Great Eastern main line, while structures to carry new overhead wires were installed on the Southend Victoria branch. New track, points, signalling equipment and overhead wire structures were also installed between Stratford and Liverpool Street, and overhead wire components at Colchester and Witham replaced. Meanwhile, work to build a 1.4km loop on the Felixstowe branch near Trimley also progressed, with signalling power upgrades and installation of three new points. The loop will support up to 10 additional freight trains in each direction per day. Upgrades also took place on the Ely to Peterborough line, including level crossing improvements at March and replacement of timbers and steel work repairs at Manea bridge, allowing removal of a speed restriction.

South of the Thames, the most significant project was the installation of new track at Battersea Pier Junction, just outside Victoria, while on the South Western switch and crossing replacement was also completed at Waterloo, along with bridge strengthening works at Vauxhall and Guildford.

On the West Coast main line, a major track renewal project took place at Milton Keynes, with track through platform 6 on the fast lines replaced. More than 500 metres of track was renewed along with 430 metres of trackside drainage. NR reports the line was handed back at the full running speed of 125mph.

Other work on the WCML included preparatory works for HS2 in the Euston area, including cable laying, removal/installation of overhead line steelwork, and drainage improvement.

In the north west, significant work took place on Merseyside. This included the Weaver to Wavertree resignalling, covering a 22-mile stretch, with recontrol of signalling in the Allerton, Speke and Garston areas to the Manchester Rail Operating Centre. Work also continued to modify platforms and track on the Merseyrail network ahead of the arrival of new Stadler-built Class 777 trains.

A further recontrol took place in Yorkshire, with York Integrated Electronic Control Centre (IECC) closing following migration to York ROC. As reported last month (p24), the IECC had been in operation since 1989, but the ROC’s sphere of control now covers most of West Yorkshire.

Work in the Greater Manchester area included the installation of an additional electrical feed between Ordsall and Stalybridge to provide extra resilience, installation of overhead wires on the eastern side of Manchester Victoria station, and tunnel cabling and lineside drainage work at Ashton-under-Lyne.

In the north east, NR replaced wooden beams within the listed King Edward bridge across the river Tyne in Newcastle. The work, from 24 to 26 December, marks the eighth year of a 13-year programme to replace all the beams in the bridge.

On the Midland main line, work included installation of 10 new switches and crossings north of Wellingborough. This is part of the scheme to create a fourth track throughout between Bedford and Kettering, allowing an additional long-distance service each hour to operate into St Pancras from December 2020. Alongside this was work to renew and replace the concrete slab supporting the track at Kentish Town, just north of St Pancras, with almost 50 metres of deteriorating concrete slab removed and over 80 metres of new track bed with improved drainage installed