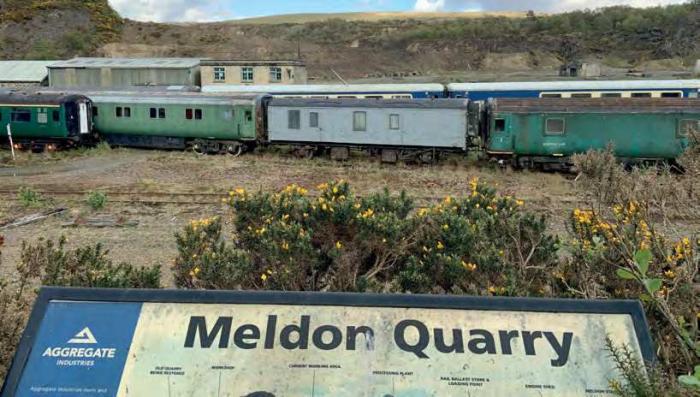 Mothballed heritage stock: Meldon quarry on 4 May 2021, with an information board on the Granite Way in the foreground.
James Abbott

With the country gradually opening up after the Covid crisis it has been feasible to undertake business trips again. I have been fortunate to visit a couple of rural railways this spring where reopening is in prospect: two fascinating cases, with some very different issues.

On 5 May, Network Rail laid on a press trip to allow us to see progress in getting the Okehampton branch ready for all-day services by the end of this year. Putting on an event of this nature in the Covid era must be a tiresome business to organise: observation of virus protocols meant everything took longer than in days gone by. Everyone had to walk through the virucide sprayer two or three times in the morning; the minibuses ferrying us round the sites had to operate at half capacity with social distancing; and indoor conversations had to be conducted with masks on.

But nevertheless, once we were in the conference portacabin that has been set up on the site of a proposed future bus/ train transport hub on the eastern outskirts of Okehampton, what a heartening project this was to learn about. There are 14 miles between Okehampton and Coleford Junction on which the track relaying programme is focused: about 10 miles are being comprehensively renewed, with new ballast, sleepers and rails in continuously welded rail (CWR); some sections of jointed track in good condition at the end of the route are being left in situ. One thing that caught out the team, trying to get ahead by laying the new rail out loose alongside the track ahead of time, was the unseasonably warm weather in April: the rail turned to spaghetti in the heat and had to have some temporary expansion joints cut in. This proved only a minor setback, with the New Track Construction machine soon picking up the pace and completing the relaying in mid-May, with work continuing on structures and drainage.

One of the four miles not relaid had CWR installed in 2006, using new machinery Network Rail wanted to try out in a quiet corner where any problems wouldn’t cause too much disruption. It’s a reminder that the mothballed Okehampton line has long made a handy testbed, with Great Western Railway giving its Exeter drivers skid pan lessons up here on the slopes of Dartmoor in advance of leaf-fall season for many autumns in succession.

To get the full Withered Arm experience, my trip involved leaving the Barnstaple branch train in Crediton and catching the bus to Okehampton that parallels the line. Crediton station is a way out of the town and, once you’ve trekked into town to catch the bus, the afternoon departure calls at every tip and turn to deposit schoolchildren; a direct rail service will be a delight by comparison. For the final stage of my journey, to reach the Travelodge on the western outskirts of Okehampton at which I was spending the night, I ambled along the Granite Way in the evening light.

This walking and cycling route runs alongside the mothballed line from Okehampton station to Meldon Quarry, with the ‘Freight trains stop and await instructions’ and fixed distants providing an atmospheric accompaniment for walkers on the Way; the parallel railway ends at the heritage stock graveyard that is Meldon sidings today. The pièce de résistance, though, is beyond the quarry: the windy walk over Meldon viaduct. High above the valley floor and with angry rain clouds scudding in from the sea on the distant northern horizon, I could conjure in my head a conjoining of oceans, a boyhood fantasy of riding in the cab of a West Country Pacific at the head of the ‘Atlantic Coast Express’, pitted against the elements. A lift the following morning with our new Deputy Editor Andy Roden from the Travelodge to the press conference was a drier, if less romantic, experience.

The trip to Okehampton followed hard on the heels of a visit to the Rother Valley Railway at Robertsbridge, wearing my hat as Chair of the 1066 Tonbridge to Hastings line Community Rail Partnership. Network Rail Chair Sir Peter Hendy presided over a ceremony at the back end of 2016 that saw the sidings at Robertsbridge reconnected to the national rail network; in the years since, the RVR has, like the Okehampton line, been the beneficiary of trial (and error) on the ‘big’ railway. After a track relaying job on London Underground went awry when new rail was laid on top of inadequate drainage, the easiest solution was to chop the rail up and ship it out of the tunnel so the drain people could put the job right: the redundant new rail was donated to RVR. Then, with serendipitous coincidence, NR wanted to train some welders on new kit in an out-of-the-way corner – allowing usable lengths to be formed in Robertsbridge yard.

The new connection to Network Rail is small beer compared to RVR’s main ambition, which is to reconnect to the Kent & East Sussex Railway at Bodiam. This is more problematic than the Dartmoor Railway reopening in that it requires crossing the A21, the main London to Hastings road, on a level crossing. The heritage railway would be going against the grain of recent history, as on the national network NR has been trying to close level crossings wherever feasible and replace them with bridges or underpasses.

The RVR extension is a hugely controversial proposal. The heritage railway argues that, as it’s a tourist line, the barriers would not be lowered on the road before 10.00, thus missing rush hour; and there would only be 10 closures a day, confined to the summer operating season at that. Nevertheless, many locals are up in arms, saying they don’t want any more road delays. A report by consultant Mott MacDonald found the RVR crossing would impose an average delay to motorists in the evening peak of 0.37 seconds per vehicle, as against 86 seconds at the notorious Flimwell road junction a few miles further north on the A21. A public inquiry into the proposal begins this month, so we can expect some verbal fireworks.