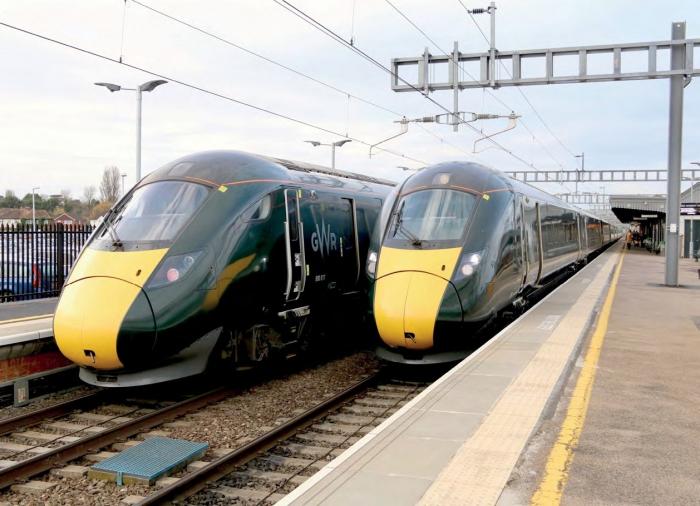 A 10-YEAR rolling programme of electrification should be established in the UK, the Railway Industry Association has said in its Electrification Cost Challenge report.

While discussing issues with recent electrification schemes, notably the Great Western Electrification Programme (GWEP), the report’s aim is to deliver a positive message stating the case for developing a rolling programme. Accordingly, it suggests electrification can be delivered for between 33% and 50% of the cost of some recent projects and highlights good practice which has been adopted. David Clarke, RIA’s Technical Director and the report’s author, told Modern Railways: ‘The report shows that we can and are delivering electrification at an affordable level, which makes the business case work. The challenge now is to do even better going forward, and the certainty of a rolling programme will help drive efficiency.’

The report arose from a recommendation in the House of Commons Transport Committee’s ‘Rail Infrastructure Investment’ inquiry, which suggested the Department for Transport should work with RIA to produce a report on cost-effective electrification by September this year. RIA’s report, published on 14 March, is a first response to that process, and is designed to restore government confidence in the industry’s ability to deliver electrification affordably.

‘We’ve engaged with our members and stakeholders and had really positive engagement, including with Network Rail, which was enormously helpful’ Mr Clarke explained. ‘This is a starter for ten, an opening statement, and we now look forward to further discussion with DfT.’ RIA Chief Executive Darren Caplan, speaking at a round table event hosted by the organisation on 27 March, said recent statements have suggested a softening of the Government’s position on electrification, and that the report is intended to start the debate around how electrification can deliver benefits for passengers and value for money.

RIA’s report suggests a well delivered ‘simpler’ electrification project should cost between £750,000 and £1 million per single track kilometre (stk), with this figure rising to a maximum of £1.5 million per stk for more complex projects. This is compared to three recent projects which experienced delivery difficulties and cost between £2 million and £2.5 million per stk. However, the report highlights the huge amount of learning and innovation which ‘gives RIA and its members confidence that future electrification projects can be delivered affordably’ and suggests costs can be reduced further if there are shared project objectives, a realistic plan and a consistent, visible pipeline of work.

RIA suggests the rolling programme would be sufficient to keep two to three delivery teams in action, each delivering 75-100stk per annum for at least 10 years. The report highlights the peaks and troughs in electrification delivery within the UK in recent years, noting that at the same time Germany has been delivering electrification at a consistent rate of around 200km per year. Such a consistent programme would help lower the long-term operating costs of the railway and support investment in people, process and plant. Speaking at the round table event, Mr Clarke suggested there is a need to rethink the view of electrification as an enhancement.

‘We need to think about the business case for an entire rolling programme’ he said. ‘We deliver a rolling programme of track works, which are classed as renewals, and we should consider electrification in the same way.’ Mr Clarke believes the industry should set out a map with a long-term vision for routes which would be electrified over a 10-, 20- and 30-year horizon to provide clarity. However, with decisions on which enhancements projects to take forward now determined through the Department for Transport’s Rail Network Enhancements Pipeline, he told Modern Railways of RIA’s concern around the visibility of future schemes.

Issues around the Great Western project primarily arose from trying to introduce novel technology on a live project, RIA’s report concludes. This led to system development and delivery taking place in parallel. Particular problems concerned the foundations and piles – with the loads on the new system being higher, this led to unusually long piles being used, but to avoid buried cables at the lineside these were placed further from the running lines. This in turn led to a greater number of piles being missed, which had a severe impact on productivity on GWEP.

The productivity of the HOPS piling system was ‘arguably the root cause of all cost and programme overrun on GWEP’, suggests the report. While conceptually the High Output system was the right approach, the problem was the adoption of an entirely new and ambitious process. The report notes there is now an established overhead line equipment design range and there has been a return to smaller piled foundations. This means industry ‘is now in the position it should have been at the start of the 2012 electrification programme with a proven system and process and a good understanding of productivity’.

Lessons are also highlighted around the design of overhead line equipment used and clearances to bridges and structures, with a recommendation that future projects should secure all necessary consents in advance, perhaps via a Transport and Works Act Order.

The full report can be found on the RIA website at https://bit.ly/2JOfKq4

MCDONALD: ROLLING PROGRAMME ‘MAKES ALL THE SENSE IN THE WORLD’

Shadow Transport Secretary Andy McDonald has backed RIA’s calls for a rolling programme of electrification, saying he agrees with the concept and that it ‘makes all the sense in the world to invest in the long-term’.

Speaking at a round table event on 27 March, Mr McDonald commended RIA’s report and lamented the Government’s decision to ‘suddenly embrace a bi-mode solution’ following the cancellation of a number of wiring schemes in July 2017. He believes recent government comments have suggested there is a denial of the evidence that electrification is the optimal solution for the core network and believes electrification should form a key element of the decarbonisation agenda.

Transport Committee Chair Lilian Greenwood, also speaking at the event, highlighted that the committee’s report on Rail Infrastructure Investment reached strong conclusions that electrification is the optimal solution for heavily-used parts of the network, and said the industry had risen to the challenge in its response. ‘Having developed the skills, let’s not lose them again’ she said. ‘RIA’s report makes a rolling programme not just a desirable outcome but a deliverable programme.’ No Government minister representing the Department for Transport attended the event.