RISE OF THE Zombie FRANCHISES 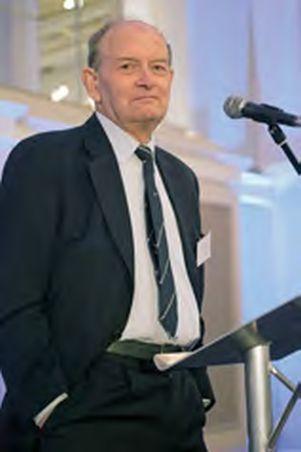 While attention is focused on how long Virgin Trains East Coast (VTEC) can keep running until the £165 million of parent company support runs out (and it may have happened by the time you are reading this), we should not forget that other train operating companies (TOCs) are also suffering. By my calculation almost half of the franchised train operating companies are struggling to meet the revenue lines on which their franchise agreements were based.

In some cases we have hard numbers. In other cases, there are coded, or not so coded, warnings in financial statements. And, of course, there are informed sources. My table (opposite) tries to identify the walking dead.

In the hard cash category, both ScotRail and Caledonian Sleeper have required parent company support. ScotRail has reported a loss of £5 million and has also secured a £10 million loan from parent company Abellio. It’s worth repeating, although, apparently, the left wingers on the Parliamentary Public Accounts Committee struggled to get their brains round the concept, that a franchise is a separate company, set up as a subsidiary of the parent group.

You can see this from the lists of shortlisted bidders for the West Midlands franchise.

DfT’s franchise agreement is with the subsidiary but includes various financial guarantees from the parent. But these contractual guarantees are for a fixed amount specified, with other bonds, in the franchise agreement. So, as is the case with VTEC, when the parent company support runs out, the subsidiary defaults. People forget that the ‘Ltd’ in a company name is short for limited liability.

■ London and West Midlands Railway Ltd, a subsidiary of Govia Ltd (a joint venture between Keolis and Go-Ahead Group) 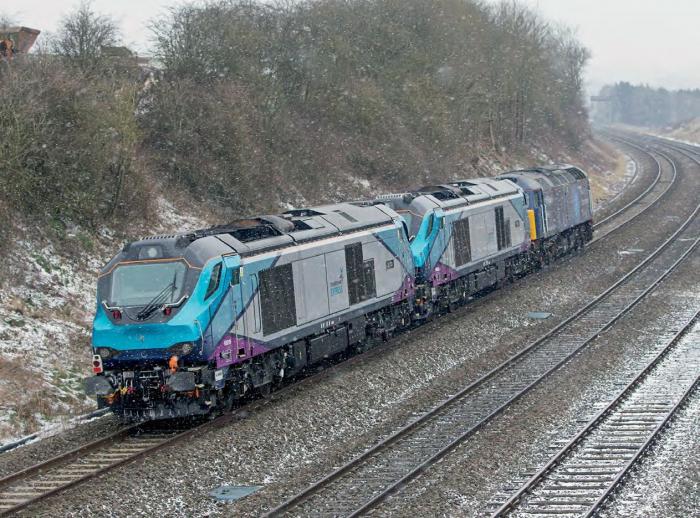 New trains coming: a brace of Class 68s (Nos 68021 and 68019), which are destined to work TransPennine Express’s loco-hauled services, en route from Portbury Automotive terminal after testing at Velím in the Czech Republic. The location is Stoke Pound, near Bromsgrove, on 1 March 2018 and the locos are being dragged by No 47813. LandFox Photography

Winter in the West Midlands: unit No 172339 forms a Stourbridge Junction to Stratford-upon-Avon via Birmingham service at Stratford Parkway on 14 December 2017. Fraser Pithie 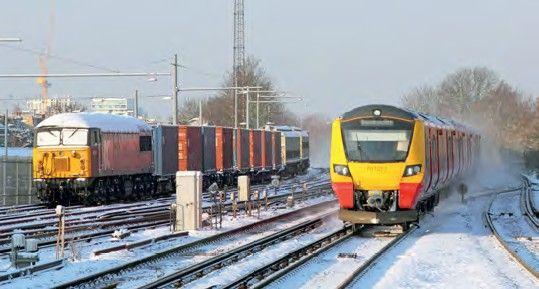 Snowy south London: South Western Railway’s No 707025 near Clapham Junction on 28 February 2018, while at left No 56303 stands with a Continental freight bound for Dollands Moor. Jamie Squibbs

Right, back to the undead. Serco has now described the Caledonian Sleeper franchise as an onerous contract following a £30.6 million loss. The parent group’s latest report and accounts lists the Sleeper as the largest of its onerous contract provisions at £44 million.

However, from 2020 the franchise agreement provides a mechanism that requires Transport Scotland to bear 50% of contract losses. From 2022 the deal can be altered to result in a ‘positive profit margin’.

We should not be surprised that more operators are reported to be under pressure. As Stagecoach Chief Executive Martin Griffiths told the Public Accounts Committee on 26 February 2018, economic conditions changed significantly between franchise award and Virgin Trains East Coast taking over in 2015. Abellio took over ScotRail around the same time, followed by Greater Anglia a year later. The FirstGroup/MTR joint venture took over South Western last year. All the franchises let in the last three years appear to be affected by the weakening economy.

According to informed sources, Abellio is confident Greater Anglia can work through these short-term pressures until the arrival of the all-new train fleet, starting later this year, which is expected to drive ridership and revenue growth.

A similar strategy was a feature of the FirstGroup/MTR bid for South Western. Overcrowding is assumed to have been suppressing latent demand. When the combination of the Waterloo scheme and the new train fleet provides more capacity, these frustrated travellers will take to the rails – build it and they will come, as posters for the film Field of dreams proclaimed.

In a trading update on 21 February 2018, FirstGroup noted only that ‘SWR is working to improve its operational performance for passengers, which has been affected by ongoing infrastructure challenges’. However, anecdotal evidence, I put it no stronger than that, suggests falling ridership is reflected in losses.

Also in the FirstGroup portfolio is TransPennine Express, where at the end of last year, when Lord Adonis suggested the franchise was losing ‘big money’, a spokesman conceded that revenue growth was running slightly behind projections but that most growth would come from the new rolling stock being introduced.

A spokesperson explained ‘Our TPE bid is based on a significant increase in capacity’ with 220 new vehicles increasing seating ‘by over 80’. Meanwhile, a redundancy programme is currently underway.

Just to round off the good news, DfT’s memorandum to the Commons Transport Committee on its Supplementary Estimate for 2017-18 included an additional £248.7 million needed to cover a fall in the net revenue received from TOCs. 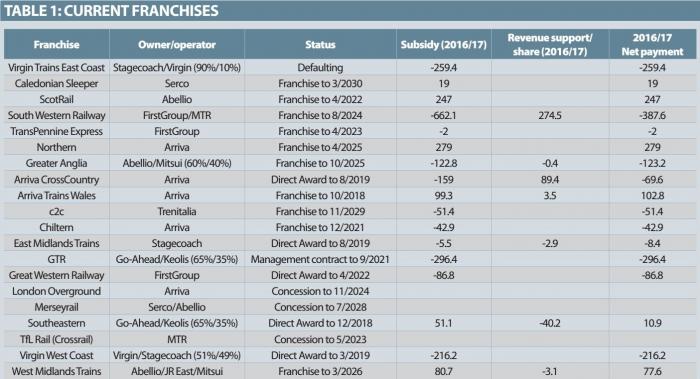