ON 30 OCTOBER 2018 a new low of sand, a byproduct of the china clay industry, started from the Imerys sidings at Burngullow, near St Austell in Cornwall, to Bow East in London. The complete train is too heavy for the South Devon banks so the irst half (eight wagons on 30 October) ran as the 6C10 12.55 Burngullow to Exeter Riverside and the loco returned to St Blazey. The second portion (now the main train) ran as the 6L12 22.00 Burngullow to Bow East and picked up the wagons already in Exeter Riverside on the way.

This is a repeat of the traic that was obtained when sand was needed during the building of the Olympic Village in East London.

The china clay industry continues to generate freight on the South Western peninsula, with clay loading points at Goonbarrow, Parkandillack and Treviscoe. Most of the clay is sent on trip workings along the branch to Fowey for export by sea, with trains three or four days a week. One train a week goes north to the Potteries: like the sand train, this splits on the Devon banks, going north to Stoke on Tuesdays and Wednesdays.

Elsewhere in the South West there is a daily stone train from the Mendips to Exeter, a weekly cement train from Aberthaw to Moorswater on the Looe branch and occasional trips of nuclear material from Devonport for the Royal Navy.

The log traic that ran north from Teignbridge between 2011 and 2014 moved to Exeter Riverside yard when the Dawlish sea wall collapse cut of the line to the west, but was lost shortly after that. 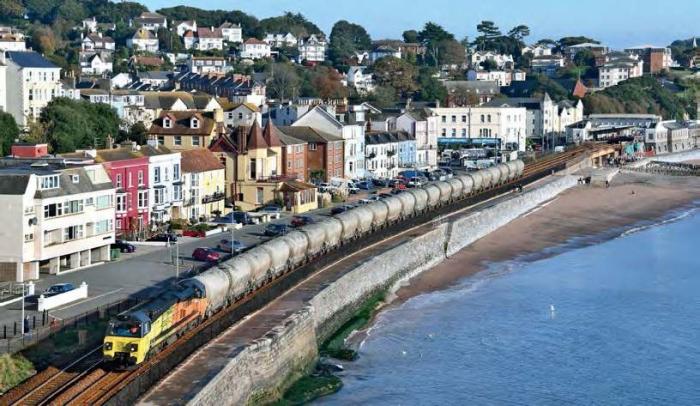 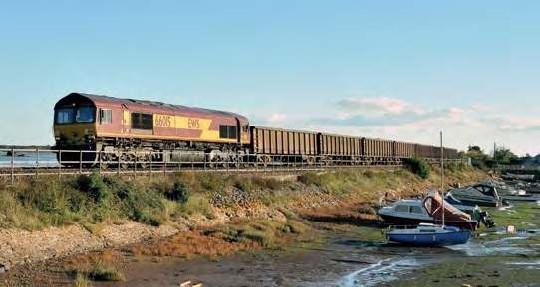 Sand for East London: No 66015 takes the irst portion of the pioneer train from Burngullow to Bow East past Cockwood Harbour on 30 October 2018.
David Hunt 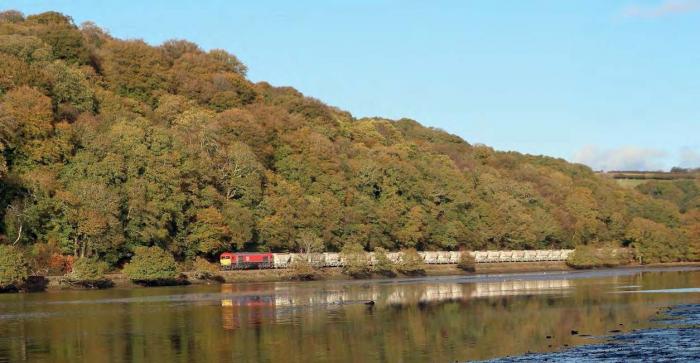 Export clay run: No 66165 runs towards Carne Point with working 6G06 on 1 November 2018. The train is pictured between Milltown and Golant alongside the river Fowey.
Craig Munday