Wires to reach Aberdeen and Inverness by 2035

Masked HST: ScotRail has turned out two HST sets with face covering vinyls on the power cars – this is No 43129 leading the 13.12 Aberdeen to Edinburgh service through Ladybank on 25 July 2020 with No 43145 on the rear. Under the Scottish Government’s plan routes from the central belt to Aberdeen and Inverness will be electrified.
Ian Lothian

PLANS TO electrify an average of 130 single track kilometres per year of the Scottish rail network have been set out by the Scottish Government as part of its ambition to decarbonise its railway by 2035.

The target in the ‘Rail services decarbonisation action plan’ is that by 2045 the only non-electrified routes in Scotland would be the Far North line north of Tain, the Kyle of Lochalsh line, the West Highland line and the stretch from Girvan to Stranraer. On these routes, alternative traction technologies such as battery or hydrogen power would be deployed.

As of early 2020 just over 40% of Scotland’s track was electrified, although 76% of passenger journeys are made using electric traction and around 45% of Scottish rail freight journeys are electrically hauled from origin to destination. The action plan points out that in the last 10 years the Scottish Government has invested around £1 billion in 441 track kilometres of electrification and associated infrastructure improvements, and in the last two years the number of ScotRail passengers carried on electrified services has increased by around 23%. Network Rail has completed an internal report ‘enabling efficient electrification in Scotland’, which has crystallised lessons learned from recent projects and set out a future approach to electrification.

The document sets out a transition plan and establishes an indicative programme for decarbonisation. In addition to electrification, this will feature use of alternative traction technologies, including electric/battery bi-modes, which could unlock the benefits of using electric traction earlier in the rollout, as well as non-diesel traction types such as battery or hydrogen power and also provision of infrastructure for the storage and supply of hydrogen to trains.

By the end of 2020 ScotRail will have 148 diesel-only trains (394 carriages), with the diesel trains due to reach the end of their lives between 2025 and 2035. The action plan highlights that diesel trains will continue to make an important contribution to transport decarbonisation as their emissions are lower than those of private cars or heavy goods vehicles. It suggests technologies reducing emissions from diesel trains should be pursued and notes the shortage of diesel carriages.

Early candidates for electrification are the routes to East Kilbride and Barrhead, where planning has already commenced (p17, July issue), and onward to Kilmarnock, as well as Glasgow to Anniesland via Maryhill, the Borders line from Edinburgh to Tweedbank, the Levenmouth branch (which is proposed for reopening) and discrete sections in Fife as a precursor to a fully electrified route. Design and development work will also be progressed this year for the route from Dunblane to Perth.

The aim by 2035 is to have fully electrified routes from the central belt to both Aberdeen and Inverness. The Aberdeen to Inverness route is slated for full electrification but it is suggested this may be unachievable by 2035, with an initial focus on providing local cross-Aberdeen electric services and use of bi-mode traction across to Inverness. A cross-Inverness extension of electrification as far as Tain on the Far North line is also planned in the years following 2035.

In south west Scotland the route between Glasgow and Carlisle via Gretna is proposed for full electrification by 2035, providing strategic capacity for rail freight and a diversionary route when the West Coast main line is closed. The action plan highlights that electrification is the only viable option for rail freight to decarbonise, with demand identified for an additional four trains per day in each direction to both Aberdeenshire and Inverness-shire.

Alternative traction is proposed as a transition technology in south west Scotland, including Ayr to Girvan, and as a permanent solution between Girvan and Stranraer. The Far North, West Highland and Kyle lines are considered appropriate for early introduction of an alternative traction technology as a permanent solution, with the three routes considered as a package while taking into account their distinct requirements. 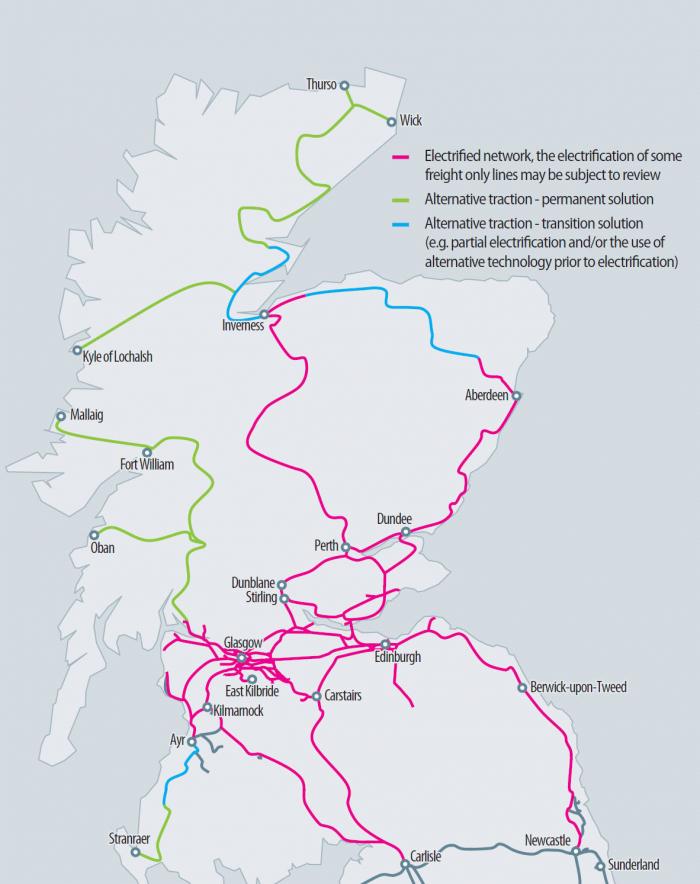 Detailed cost analysis by route has not yet been undertaken, but the Scottish Government says it will maintain its previous level of commitment to rail investment. The plan will be updated and refined as schemes progress, with a further review planned in spring 2023 to cover Control Periods 7 and 8 (2024-34).

While it is accepted that the proposed rate of electrification is challenging, the action plan highlights recent delivery of a number of electrification projects in the central belt. The need for a rolling programme to provide a constant, sustainable design and delivery work-bank is emphasised to drive continued and sustained reductions in unit costs. It is suggested that if Network Rail Scotland has freedom to determine designs appropriate for Scotland’s network it ‘should be able to deliver pragmatic, efficient electrification solutions that adopt and adapt best practice from here in Britain and across Europe at an increasingly efficient price’. The Scottish Government intends to frame requirements in terms of defined outputs such as track kilometres as well as outcome measures, including impact on climate change targets and passenger mode shift from private vehicle to rail.