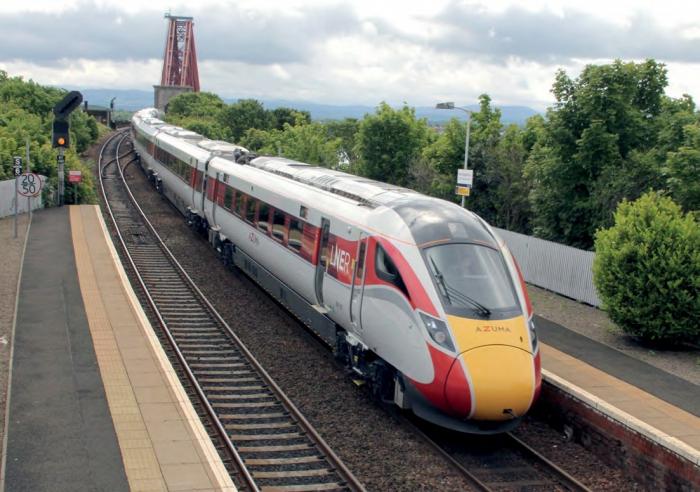 Azuma on the Forth Bridge: on 26 May 2019, No 800105 ran from Doncaster to Aberdeen for driver training purposes. It is seen here at North Queensferry. Ian Lothian

The operator launched the new Hitachi trains on services to Leeds and Hull from 15 May, and by the end of June was expecting to have six diagrams switched to Azuma operation for services south of Leeds.

Operation of Azumas on the East Coast main line in electric mode has been restricted due to electromagnetic compatibility issues. Network Rail is fitting additional lineside equipment to mitigate this, and as of late May Azumas were cleared for electric operation as far north as Darlington. Hitachi is also to fit filters to the Azuma fleet – while it is thought the lineside installations will provide sufficient mitigation for the electromagnetic interference issues, the filters will give additional insurance. LNER is to introduce 65 Hitachi-built Azuma sets, with a mix of five- and nine-car electric and bi-mode sets. The first trains to be delivered are the 13x9-car bi-modes (Class 800/1), and as of late May, 12 sets had been sold to the operator, with the 13th undergoing modifications at Hitachi’s Newton Aycliffe factory in County Durham prior to acceptance.

Next to be delivered are the 12x5-car electric sets (Class 801/1), which LNER will initially operate in pairs to replace Class 91/Mk 4 sets; the first rake of Mk 4 coaches was placed into store at Worksop on 4 June. The ‘801/1s’ will be followed by the 10x5-car Class 800/2 bi-modes, allowing replacement of further HSTs, before finally the 30x9-car Class 801/2 electric sets will complete delivery of the 65-strong fleet by spring 2020.

LNER plans a major timetable overhaul in December 2021, following the completion of major infrastructure works on the East Coast that include the remodelling of the station throat at King’s Cross. This will introduce regular four-hour timings between London and Edinburgh and will take advantage of the new fleet. Earlier enhancements include more direct services to Lincoln and Harrogate, which are due to be introduced by the end of this year.