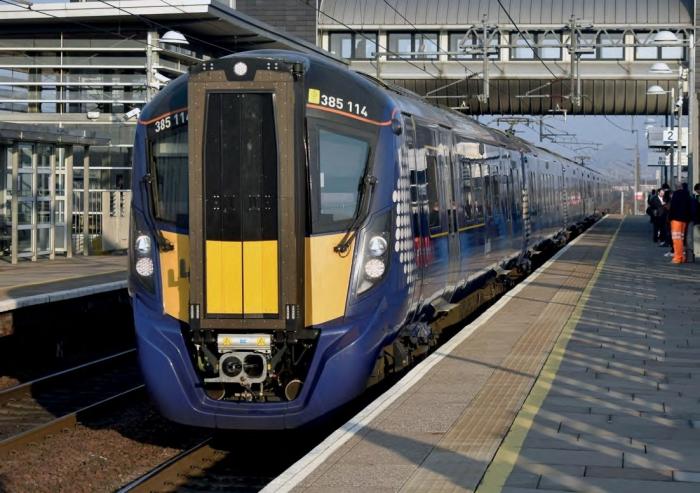 Class 385: a brace of the Hitachi-built units heads through Edinburgh Park with a Waverley to Queen Street service on 27 February 2019. Joel Coulson

Having come straight into the Table of Truth in third place, ScotRail’s Hitachi Class 385 electric multiple-units banged in a 50% improvement on their inaugural Miles per Technical Incident (MTIN) to take second place on the moving annual average (MAA) measure, ahead of Siemens’ Class 700 Thameslink fleet, albeit by only 64 miles. Over the next two reporting Periods the Class 700 fleet will be losing two sets of very poor reliability, which should benefit the MAA. And it looks as though individual Period reliability has stabilised around 15,000 MTIN. So an interesting competition is building up – especially as both companies have far more reliable trains in service with other operators.

Incidentally, the CCTV ‘fix’ that took the Class 700s to their present level was a software issue. The two Boeing 737 MAX 8 crashes show that the railway is not the only transport mode grappling with the new generation of software-enabled equipment.

Two items of news have brought the second and third phases of the Department for Transport’s Intercity Express Programme (IEP) into focus. The first is that LNER expects to have all 13 of its Hitachi Class 800/1 nine-car bi-modes accepted by 2 May, in good time for the 19 May timetable change. LNER is planning to use the first nine sets to cover six London – Leeds diagrams.

These bi-modes will eventually replace the current InterCity 125 diesel trains on Anglo-Scottish services, but pending fitment of the electro-magnetic interference (EMI) filters (p55, last month) they will be restricted to services south of York; lineside installation by Network Rail to Edinburgh is now substantially complete, with testing underway in conjunction with LNER and Hitachi. That said, until filters are fitted the trains will be running an interference risk on the Frequency Division Multiplex (FDM) communications links between King’s Cross and Grantham, emphasising that the interference is not just an issue with Solid State Interlocking (SSI) lineside communications. Last month’s feature on LNER (p57) confirmed that that the new IEP timetable, with 13 paths every two hours including an hourly four-hour London – Edinburgh headline timing, will not now be feasible until December 2021. This is due to infrastructure constraints. When Stagecoach and Virgin won the Inter-city East Coast franchise in 2014 the new all-IEP timetable was scheduled to start in May 2020.

With open access operators also requesting Long Distance High Speed (LDHS) paths on the East Coast main line, the Office of Rail & Road held an inquiry. The outcome was that LNER has firm rights to its additional hourly path from May 2021. Rights from May 2019 were contingent on the infrastructure upgrades and rolling stock being available, as is the case with Leeds services. ORR also gave LNER firm rights for a two-hourly Middlesbrough service, also from May 2021, with contingent rights from May 2020.

FirstGroup was seeking five daily LDHS London – Edinburgh paths each way. ORR approved this application with firm rights starting in May 2021. If the rolling stock and infrastructure was available before then, FirstGroup could apply for earlier access rights in the usual way. Approval of the FirstGroup rights was conditional on the new rolling stock being ordered. The contract for 5x5-car Hitachi AT300 EMUs units was placed on 22 March 2019 for delivery in ‘autumn 2021’.

These will dispense with the DfT-specified diesel auxiliary generator units, which were one of several eccentric features that characterised the IEP contract. Batteries will provide standby power only, with no traction option. As Table 4 shows, the pressure is off on deliveries for LNER and the IEP fleet should be nicely run in when the new timetable launches at the end of 2021.

Referring to the table, all IEP trains have been numbered sequentially, thus Train 57 was the last of the Great Western sets. The original available-for-service dates are taken from the contract. Due to the unavailability of the Great Western main line electrified test track, Hitachi was granted a 90-day contract extension – near enough 13 weeks. The right hand column shows the current contractual acceptance dates.