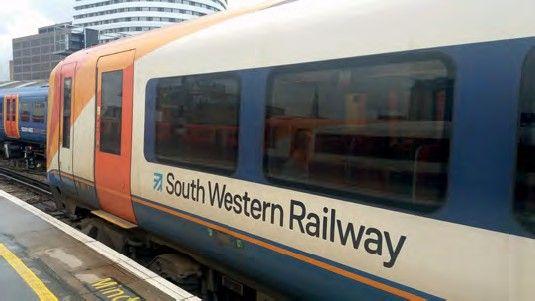 SWR branding: although the new South Western Railway livery is still fairly scarce at present, the operator’s branding is now becoming widespread on its rolling stock. Unit No 444019 wears the new titles as it awaits departure from Waterloo with the 17.05 service to Weymouth on 12 March 2018. Colin Scott-Morton

THE NUMBER of rail passenger journeys in Great Britain fell by 0.9% to 438 million in Quarter 3 (October to December) of 2017-18, according to data from the Office of Rail and Road.

The main driver of the decrease was an 8.1% year-on-year fall in season ticket sales. Journeys in the London and South East sector were down by 1.4%, while the Regional sector saw a 0.4% fall, the first decrease in nearly five years. Long Distance journeys were up 1.5%, growing for a seventeenth successive quarter.

Govia Thameslink Railway, the largest operator, reported year-on-year passenger growth for the first time since 2016, with journeys up 1.6%, but despite this London and South East journeys still fell due to decreases on five other operators. This included South Western Railway, which saw 54 million journeys over the three-month period, four million fewer than the same quarter in 2016-17 and the lowest figure for any Q3 in five years. TfL Rail, Great Western Railway, Southeastern and London Overground were the other LSE operators to see a fall in journeys.

Chiltern Railways saw the highest growth at 7.4%, reflecting the impact of its new route to Oxford city centre that opened in December 2016. In the Regional sector Northern reported a notable fall in journeys at 4.9%, which may have been caused by industrial action.

Continuing an ongoing trend, the number of journeys made using season tickets was down 8.1% year-on-year. The market share for season ticket journeys was 37%, which ORR says is down from almost 50% a decade ago. In contrast, there was an 8.9% rise in the number of journeys made using Advance fares. Despite the fall in passenger journeys, passenger kilometres increased by 1%, with growth across all three sectors.

Passenger revenue was up by 3% to £2,475 million, again with growth across all three sectors. Season ticket revenue fell by £17 million (3.0%), the eighth successive quarter in which it has fallen, but this was offset by growth in use of Advance, Anytime and Off-Peak fares. Revenue per journey was up by 4.1% to £5.62.