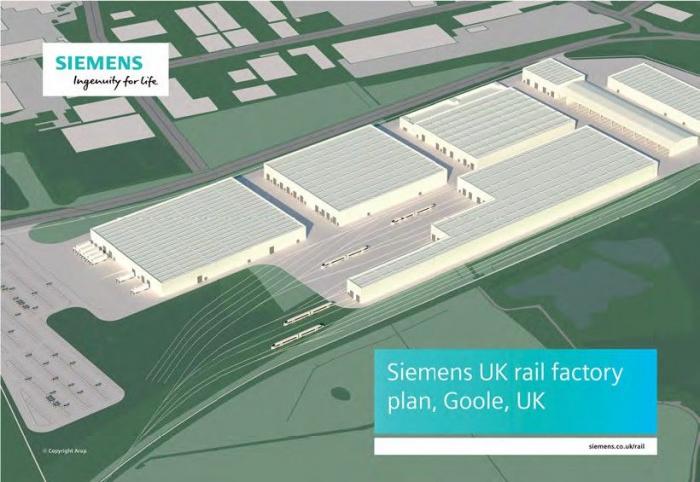 SIEMENS HAS signed a long-term agreement to lease land in Goole in Yorkshire, on which it plans to establish a new factory to manufacture and commission trains.

The company aims to start phased development of the 67-acre site later this year, if investment conditions are met and subject to its success in winning major future orders. The investment of up to £200 million in the site could create up to 700 jobs, plus an additional 250 during the construction phase and around 1,700 jobs in the UK supply chain.

The selected site is at the Goole 36 development, adjacent to junction 36 of the M62 motorway. Detailed plans envisage an extensive footprint including manufacturing and commissioning buildings, warehouses, offices and stabling sidings, with potential for the development of a test track.

Siemens says the new site will complement its existing UK operations. Through its regular supply chain events and sourcing strategy, the manufacturer plans to strengthen its use of UK-based firms, both in the development of the site and in local content used in future rail orders for the UK market.

The move follows CAF’s announcement of construction of a new factory at Newport in South Wales, while Alstom says its new technology centre in Widnes could be used for manufacture if it wins future orders. Bombardier and Hitachi already have UK manufacturing sites at Derby and Newton Aycliffe respectively.