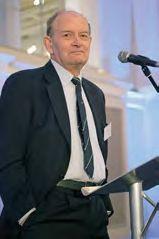 It’s not every day you see £345 million of rolling stock investment returned to the market at the stroke of a pen. But that was the case when the Department for Transport announced on 27 March that the replacement South Western franchise had been awarded to the FirstGroup-MTR consortium.

Of course, readers of this column should not have been surprised by the news. In the June 2016 ‘Informed Sources’, under the heading ‘Rolling stock market faces uncertain times’ I explained that the upgrading of the South West Trains Class 455 fleet with new three-phase drive traction packages was intended to free up capacity at Wimbledon depot to accommodate the new Class 707 Siemens Desiro City EMUs which SWT had ordered as part of the Waterloo capacity expansion programme.

But then came a crucial caveat. Noting that ‘In a year’s time FirstGroup could be running the replacement South Western franchise’ and that DfT’s franchise bid evaluation included a weighting for quality and, in particular, new trains, I concluded, ‘add in cheaper new trains at rock bottom lease rentals and it could be a winning move to replace the Class 455s’.

First MTR saw virtue in an homogenous fleet for South Western’s inner-suburban services. So getting rid of the highly non-standard Class 458/5 Alstom Juniper EMUs made sense. Meanwhile, the lease rentals on the Class 707s were widely recognised as expensive.

Add in the need for new interior configurations to minimise dwell times and a total clear-out made economic and operating sense. Well, to First MTR, at least. According to informed sources, the Stagecoach bid kept the Class 707s and the ‘458/5s’ and replaced just the ex-BR fleets. But, as with other recent franchise awards, new trains to the max ticked DfT’s procurement boxes.

Anyway, by December 2020, or in 44 months’ time, Bombardier or Siemens will have delivered and commissioned 90 Aventras or Desiro Cities and have them running at reliability levels similar to those currently being achieved by the trains they replace.

Given the 30% holding in the winning joint venture by MTR Corporation of Hong Kong, there was speculation that a Chinese manufacturer might be in the running for the order. But that 44-month schedule meant a prudent buyer would want to buy a train with substantial miles behind it off a hot production line. 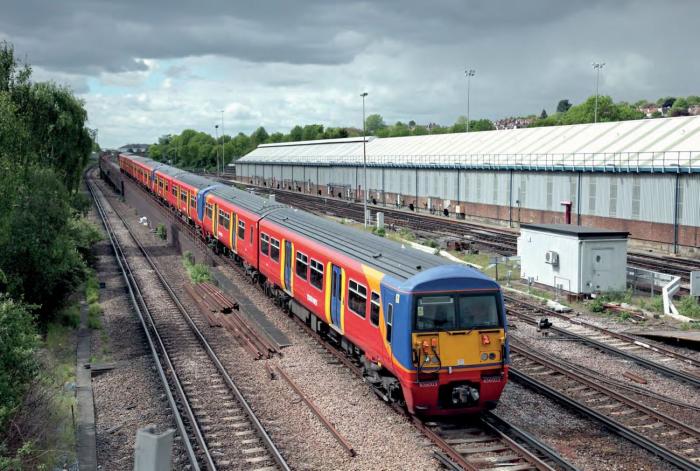 Storm clouds over Wimbledon depot: time-limited ex-BR Class 455 and 456 EMUs, led by two-car No 456003, come off Durnsford Road viaduct en route from Guildford to Waterloo on 20 May 2015.
Antony Guppy

Now for the surprise. The BBC got hold of the fleet replacement plan and ran the story as ‘New trains dumped before they enter service’.

And railway people who should have known better went into outrage mode, forgetting that the ‘707s’ are going to be needed until they are replaced and it is going to take time to build the 750 new vehicles – 60x10-car and 30x5-car units.

Of course, in a rational world it is bonkers, but in the arcane world of franchise bid evaluation mass extinctions make for a sexy set of numbers. See the extract from the South Western Invitation to Tender in the box and note that in the evaluation, train service and performance represents over half the total weighting, with the rolling stock sub-plan having a weighting of 22%.

Note too that in the calculation which puts a value on the quality aspects of the bid and adds it to the Net Present Value of the premiums to be paid, in the case of South Western the factor ‘n’ is a very high 130 (see box overleaf).

So all-new trains with toilets and air conditioning and rapid boarding and unloading had a double benefit, enhancing the quality score while reducing lease rentals.

As with the Class 379s and 321s in the Greater Anglia mass extinction, South Western will see not only too-expensive recently-acquired modern rolling stock replaced, but also expensively upgraded older units. The financial toll looks like this.

Quoted cost for the Class 707s, funded by Angel Trains, is £240 million. To this should be added £65 million from Porterbrook Leasing for the Class 458 programme which created 36x5-car Class 458/5 EMUs out of 30x4-car Class 458 sets by cannibalising the similar Class 460 Gatwick Express trains.

Also funded by Porterbrook is the current retractioning of the Class 455 fleet. This replaces the English Electric camshaft control of DC traction motors with a completely new three-phase drive traction package from Vossloh Kiepe. That’s another £40 million.

Why retraction the aged ‘455s’? Well, the Class 707s would have been unaffordable if SWT had had to build a new depot to maintain them. Modern traction equipment would reduce Class 455 maintenance, allowing Wimbledon depot to accommodate the Class 707s.

All this was driven by the requirement in DfT’s High Level Output Specification for the current Control Period 5 (CP5) to provide more peak capacity into Waterloo. It was a cunning plan that has served its purpose and now been overtaken. 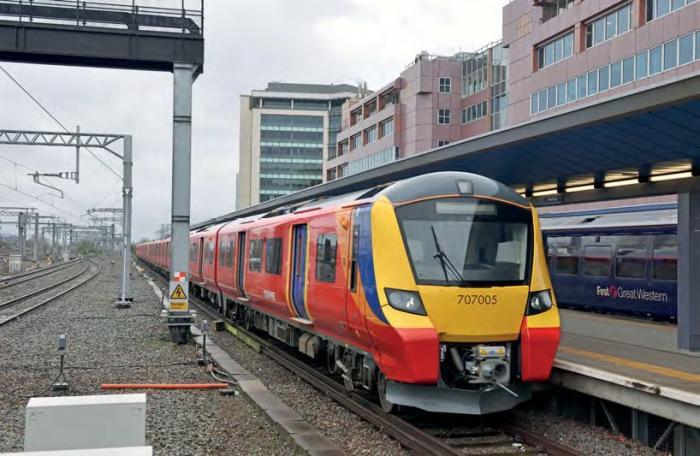 However, with CP6 enhancements cancelled due to lack of funds, First MTR’s real surprise comes into play.

In contrast to the new trains on the suburban services, the trains that refused to die are making another comeback. The Class 442 EMUs, built by British Rail for the Bournemouth-Poole-Weymouth electrification in 1988, are to be upgraded, including replacement traction equipment.

But below the floor it was a different matter. In the true Southern tradition, the traction equipment from the legendary 4-REPs was recovered from existing trains.

The Department requires that Bidders provide rolling stock that is able to achieve rapid passenger boarding and alighting at any intermediate station stop between the start and end point of the journey, even with a full passenger load (seated and standing), and with high passenger turnover as experienced at several Main Suburban and Windsor Lines stations. The rolling stock provided must be able to achieve a maximum station dwell time (stop to start) of 45 seconds (or less) at stations where currently the TPR (timetable planning rules) value is 1 minute or more, and 30 seconds at all other stations. This must be achieved no later than December 2020.’ South Western franchise Invitation to Tender

For younger readers, the 4-REP was a four-car slam door unit with a traction rating of 3,200hp. They were designed for use with generally four-car trailer sets (TC). And even with a 4-REP+4-TC combination, this was a pretty generous supply of tractive effort.

Where the 4-REPs had a notional maximum speed of 90mph, the five-car Class 442s (5-WES in Southern nomenclature) were 100mph sets. On a demonstration run in April 1988 a ‘442’ set what was claimed to be the world speed record on third rail at 108mph.

But I digress. When SWT decided to retain the Class 458s at the 2007 franchise renewal, the Class 442s were released and eventually transferred to Gatwick Express, where they replaced the purpose-built Class 460 Gatwick Express units.

A Mk 3 coach with end doors was totally unsuitable for airport services and the ‘442s’ were recently replaced by modern Electrostars. Now 18 of the 24 units are being taken out of store for a new lease of life. 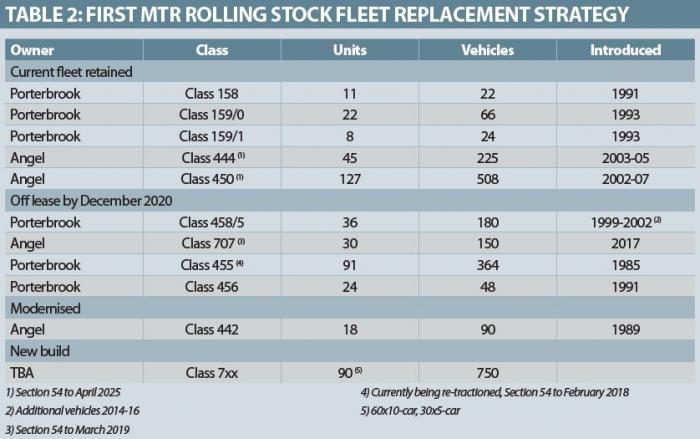 What of SWT’s other slam-door replacement fleets? The four-car Class 450s and five-car Class 444s (the latter featuring 23m vehicles) have Section 54 protection to 2025 and will be retained. Under Section 54 the Department for Transport guarantees continuing use at franchise change.

Finally, First MTR is keeping the Class 158/159 DMU fleet where Stagecoach was proposing third rail bi-modes. This is good news for those in the DMU market, but bad news for other train operators that were hoping to acquire the units. 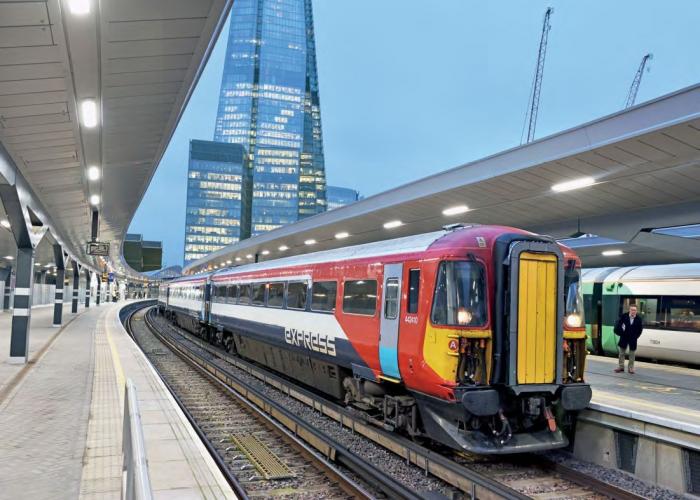