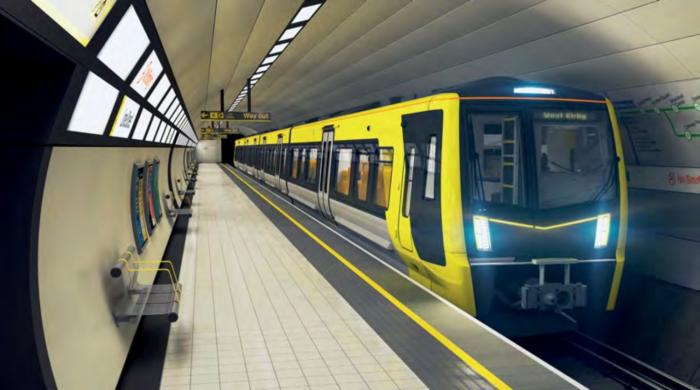 New trains for Merseyrail: artist’s impression of the new Stadler fleet. A final decision on the livery is yet to be taken, and Merseytravel may choose to adopt a yellow front end rather than the black shown, as this is its house colour. All images courtesy Merseytravel

STADLER HAS been selected as preferred bidder to supply 52 new trains for the Merseyrail network in a £460 million deal.

The new fleet will replace the current 59-strong Class 507/508 EMU fleet. The first new train is expected to be delivered in summer 2019, with deliveries ramping up to one per week so that all will enter service by the end of 2020. A new faster timetable is promised in 2021 once the fleet replacement is complete.

Bidders were required to propose a fleet based on 48 daily diagrams in service plus two sets on standby, and the three final bidders all settled on a fleet size of 52. Some will run in pairs at peak times on the busiest parts of the network. The contract also includes an option for up to 60 more units, which can be taken up right through to the end of the current operating concession in 2028, and the four-car sets can also be lengthened should circumstances change over the life of the fleet.

Merseytravel’s Rolling Stock Programme Director David Powell told Modern Railways: ‘We came up with a design guide which we provided to the bidders and asked them to come back to us with their proposals; in the end Stadler aced it’.

Each four-car articulated train will carry 60% more passengers than the existing units while retaining the same number of seats. At 65 metres in length, they will be three metres longer than the existing trains; as David Powell explains: ‘We wanted to make sure that as much of the unit length as possible is devoted to passenger carrying. The cabs need to be comfortable but they don’t need to be full of equipment cubicles, so all that sort of equipment is on top of or underneath the trains.’

The interior layout of the trains incorporated feedback from an extensive passenger survey. Facilities will include Wi-Fi, intelligent air conditioning, through gangways, spaces for wheelchairs, pushchairs, luggage and cycles as well as both AC and USB charging points. Dot matrix passenger information displays will be supplemented by dynamic displays which can show onward travel information and details of any disruption. Transport Focus feedback has suggested that some screens show what is being seen by the on-board CCTV as a deterrent to antisocial behaviour.

Innovative features in the driving cab include clear glass screens between the rear of the cab and the passenger saloon, which will be capable of being turned opaque at the press of a button. End doors, compulsory for trains which operate in tunnels, will be located to the right-hand side rather than in the centre of the cab. ‘A substantial centre support delivers the required crashworthiness whilst visibility is really good from this cab; it exceeds the minimum specifications by some margin’ says Mr Powell. ‘We think this will provide much better visibility for drivers than the existing fleet.’

The trains will be dual voltage units, capable of operation using both DC third rail and AC overhead supply, but the AC equipment will not be fitted initially. Space is allocated in the underframe for a transformer and the associated control kit, and adding a pantograph will be simple. This move would enable Merseytravel to meet aspirations to extend its network to locations such as Skelmersdale, Warrington and to Wrexham via the Borderlands line. ‘Merseyrail will no longer be defined by the end of the third rail – it will become a much more integrated part of the national network and we’ve got the right fleet of trains to do that’ says Mr Powell.

Stadler will take over maintenance of the current fleet from mid-2017 to enable it to begin work on transforming the depots to handle the new trains. Merseyrail’s current maintenance team of almost 150 staff will transfer to Stadler under TUPE rules as part of that process. Stadler will base its maintenance at Kirkdale depot in a new purpose-built facility, rather than the current main depot at Birkenhead North, so the latter can be used to maintain the existing fleet while Kirkdale is rebuilt. Other depot work will see the wash plant reinstated at Birkenhead North.

The new trains will be six tonnes lighter than the existing units. They will be configured electronically and mechanically as two half-sets to offer a good level of redundancy in the event of any faults or failures. Whilst Merseytravel set a minimum reliability figure of 40,000 miles per technical incident (MTIN), Stadler’s bid is for an MTIN of 49,000.

Merseytravel has opted to purchase the new fleet outright rather than through a rolling stock leasing company. The trains will be leased to Merseyrail and will stay on the local network until they are retired. Funding has come from a number of sources, including significant reserves put aside for this project over several years and the Bank of England’s Public Works Loan Board, with a £190 million loan from the European Investment Bank secured. David Powell notes ‘This is a really simple model and as a public body we’re able to borrow at really competitive rates. We invited bidders to offer alternatives but they couldn’t do any better!’

Improvements will be required to the third rail power supply, which although nominally 750V DC falls to below 400V at the extremities of the network. A £64 million programme will see the supply upgraded with two additional feed points supplementing the three existing feeds into the system, along with additional DC substations and improved cabling to ensure a more consistent supply. Regenerative braking will lead to a reduction in power consumption, and combined with improved performance this will help cut nine minutes from the journey time between Hunt’s Cross and Southport when a new timetable is introduced in 2021. The power supply upgrades will potentially cater for an expanded fleet operating at increased frequencies in the future.

There is also an option to look at on-board energy storage systems which could, at the very least, use braking energy to aid acceleration from station stops, thereby further reducing energy consumption, with the potential for a trial of battery power on one unit as well. Tony Miles 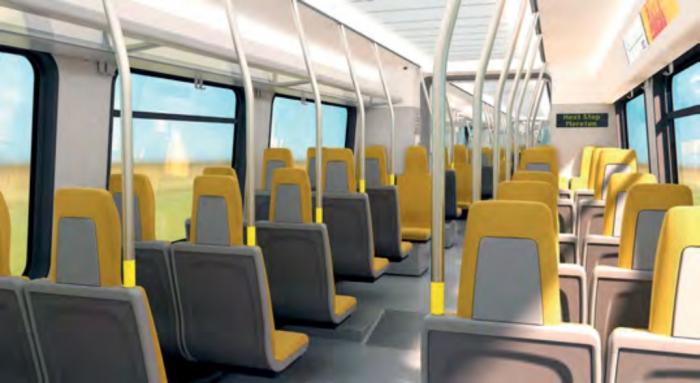 Interior view: the trains will include a mixture of airline and bay seating and through gangways between carriages. 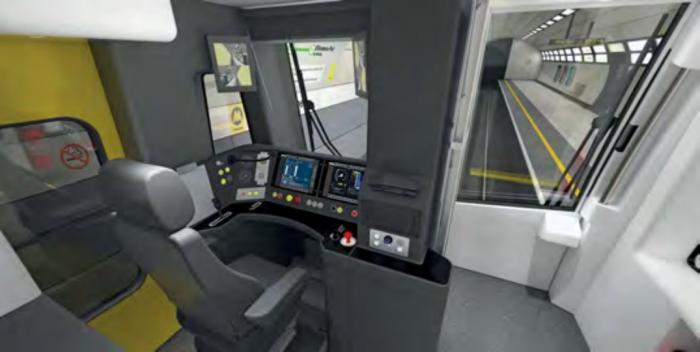 Spacious: Merseytravel says the cab in the new trains will provide better visibility; the end door for emergency exit is located on the right hand side.

DCO AND THE PLATFORM-TRAIN INTERFACE

Introduction of the new Merseyrail fleet will be accompanied by a move to driver controlled operation (DCO), with drivers opening and closing doors (assisted by in-cab cameras) rather than guards as at present. Merseytravel says it has used DCO rather than industry standard driver only operation (DOO) as it wants passengers to be reassured that at many times the driver will not be the only member of staff on-board.

To that effect, the intention is to create around 60 new customer service roles, with a second member of staff deployed on trains at key locations and times; ‘we envisage that many of these roles will be in the evening when there is more risk of antisocial behaviour’ says Mr Powell. Merseytravel says that the alternative option of retaining guards was found to be less efficient and unaffordable.

At the centre of the procurement process was feedback from the Rail Accident Investigation Branch (RAIB) following the death of a passenger who fell between the platform and train at James Street station on 22 October 2011. RAIB made it clear following the incident that Merseyrail should ensure that the platform-train interface can be monitored until a train has left the platform.

With this in mind, screens displaying images from bodyside cameras will be visible to drivers until the train is clear of a station; this will require a new set of procedures to be agreed with RSSB as currently the screens go blank when trains reach 4mph. Drivers will also be provided with a public address system enabling them to address passengers on the platform directly if they are in danger or if they are impeding the safe departure of a train. ‘If a screen or camera fails the train comes out of service and it hits Stadler in the wallet’ says Mr Powell. ‘The risk is fairly and squarely with Stadler.’ 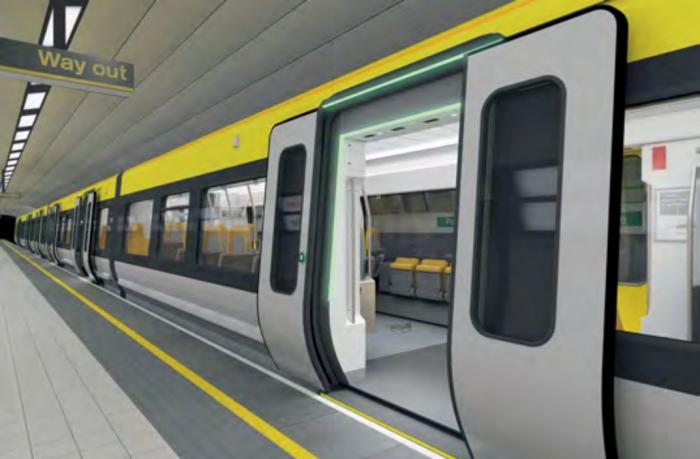 Level boarding: a sliding step will make access to the new Merseyrail trains easier, while a profile strip on the side of the train aims to reduce the likelihood of passengers falling onto the track.

RAIB also advised Merseyrail to cut the gap between the train and platform to reduce the likelihood of falls between the platform edge and the train. This will be achieved through the fitting of a profile strip on the lower bodyside of the train that fills this gap and effectively creates a vertical barrier.

The new fleet will also be more accessible, with the aim that passengers with wheelchairs, pushchairs and bikes will be able to board unassisted, removing the need for deployment of a ramp by station staff. Presently, platform heights on the Merseyrail network vary from around 700mm above railhead height to over 1,020mm. To solve this, Network Rail is to deliver a £20 million programme to ensure that all platform heights will be in the line with the standard of 915mm, with a small 25mm tolerance at the lower end. This is likely to be achieved through a mixture of tamping and platform work, including 12 platform lengthening projects. Some switch and crossing alterations and signal re-sitings will also be required.

The issue of wide stepping gaps between the train and platform will be solved by provision of an ‘intelligent sliding step’ at every doorway. This will slide out before the doors open and, using an ultrasonic sensor, will stop 35mm from the platform edge. Because it measures the distance to the platform edge the system will work on curved platforms and is interlinked with the door mechanism to ensure that it only retracts once safe to do so as part of the door closure sequence.

Each doorway will also be an illuminated ‘portal’ which changes colour during the door opening and closing sequence, with green lighting indicating that boarding and alighting is safe whilst a change to amber indicates that the doors are about to close and red confirms that the doors are actually closing or opening. Three interlinked detection systems will ensure that nothing gets trapped between train doors, with sensitive door edges stopping trains moving if a pull is detected from anything as small as a child’s finger or as narrow as a bag strap.