STADLER WILL build a new fleet of 42 trains for the Tyne & Wear Metro after being awarded a £300 million contract by North East Transport Authority Nexus. The trains will start arriving in 2022, with commercial operations beginning in 2023 and the full fleet in service by 2024. 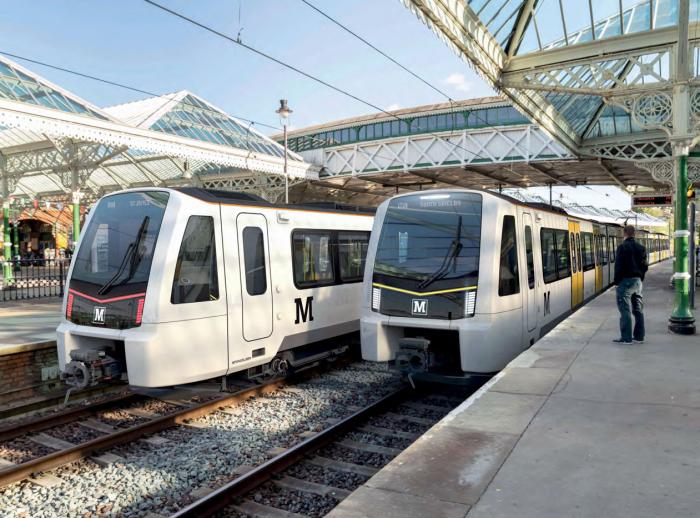 The overall programme is valued at £362 million, with £337 million of funding from Government. The value of the deal with Stadler could rise to £700 million over 35 years through a contract to maintain the new trains.

The new trains will be walk-through five-car sets, each capable of carrying 600 passengers. Features will include air conditioning, Wi-Fi and USB charging points, as well a sliding step deployed at each of the 16 doors (eight per side) to close the gap with the platform and improve accessibility. Nexus promises that the trains will be around 15 times more reliable than the current fleet, with a reduction of 30% in the power requirements of the new fleet thanks to more efficient motors and regenerative braking. They will also be fitted from the outset with on-board batteries, which will allow them to travel for 45 minutes away from overhead wires, potentially making expansion of the Metro easier and more affordable.

Stadler will build the trains in Switzerland, but with many parts coming from companies in the North East and elsewhere in the UK, Nexus says. The design of the trains will be finalised this year with production starting next year. The first trains will arrive slightly later than planned in 2022, but Nexus says a ‘rapid delivery schedule’ will see the full fleet delivered by 2024.

The design of the fleet has been the subject of consultation by Nexus, with more than 3,000 passengers giving their views in a survey in 2016. Stadler’s designer, Zurich-based Nose Design Experience, teamed up with Newcastle firm Octo Design to work on the trains. The livery of the trains is yet to be finalised, with initial images showing the new fleet in white.

Stadler will also build a new £70 million depot on the site of the current facility at South Gosforth. This will feature sedum roofing, rainwater recycling, daylight capture and other environmental features. The firm will take over maintenance of the current fleet this summer with around 100 staff transferring to become Stadler employees, before rebuilding the depot ahead of the new trains arriving. Nexus is building a separate £20 million satellite depot at Howdon in a project delivered by Buckingham Group Contracting, which will be used during the transition while the new depot is under construction.

The current fleet of 89 trains, half the length of the new ones, will be sent for recycling once the new fleet is in place. Two trains will be set aside for possible heritage interest and five carcasses for possible community use.

The order includes options for up to six additional trains to follow the initial 42. Nexus is bidding for £110 million of Government funding for the Metro Flow project, which would allow it to double the current single-track sections between Pelaw and Bede on the South Shields line, with the aim of completing construction work by October 2022. This would involve Nexus taking ownership of the single-track freight line which parallels the Metro, including track works and erection of overhead catenary, although Nexus says freight trains would still be able to run to Jarrow oil terminal. If this is achieved, four or five additional trains would be ordered and the daytime frequency of Metro trains across the network would be increased from five per hour to six per hour. The submission for the Transforming Cities Fund was made in November 2019. Nexus also promises to extend the hours of services to and from South Shields when the new trains arrive, as some will be stabled at the new Learning Centre there.