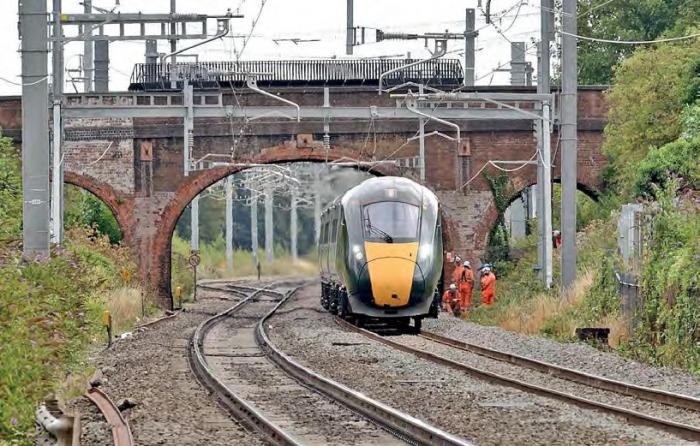 Speed restriction: a down Class 800 working passes under the B3019 road bridge at Steventon on 8 August 2018. Brian Perryman

COUNCILLORS AT the Vale of White Horse Council have rejected an application from Network Rail to rebuild Steventon overbridge, on the Great Western main line between Didcot and Swindon.

NR sought listed building consent to demolish and rebuild the Grade II listed structure to provide adequate clearance for overhead wires as part of the Great Western electrification. Council officers considered that ‘on balance and regrettably’, the demolition of the bridge was necessary to deliver the benefits of the wiring scheme, with the report to the Council’s Planning Committee saying they ‘weigh heavily’ in favour of the substantial public benefits the demolition would bring. Both the Council’s Conservation Officer and Historic England also raised no objection to the plan. Officers further advised that if the application were refused the committee ‘must be satisfied and provide material reasons that demolition of the bridge is not outweighed by the public benefit at a national level’.

However, councillors chose to reject the application, agreeing that the bridge should be preserved and its loss ‘would not significantly improve infrastructure at a national level’. It believed Network Rail ‘had not demonstrated that there are exceptional circumstances which justified the demolition’, with local residents and businesses suffering due to road diversions and concern over a lack of public consultation. The committee did not believe ‘the inconvenience of lowering the track outweighed the listed building nature of the bridge’.

The bridge does not currently have sufficient clearance for Overhead Line Electrification (OLE), with the situation exacerbated by the need to have clearance through adjacent level crossings while maintaining a compliant gradient for the contact wire. NR advised the planning committee that a full track lower of 770mm to achieve clearance at both crossings would require around 800 metres of track and ballast to be renewed on both sides of the bridge and that the depth of excavation required to achieve this could destabilise the toe of the cutting and require significant earth retaining structures to be installed around the bridge. Reports from CH2M also suggested a significant lower of the track level would introduce ‘a very high risk to the railway of flood events’.

An alternative partial lower of 444mm would require closure of Stocks Lane level crossing, because the OLE could not reach sufficient height to provide clearance at the crossing.

NR has implemented a temporary solution enabling electric trains to use the route from December, which involves an extension of the bridge parapet heights and a track slew to provide maximum clearance.

However, this has still resulted in a speed restriction of 60mph below the bridge and NR maintains it is not viable as a permanent solution. A letter from the Department for Transport dated 9 July advised that the bi-mode Class 800 trains will ‘operate in slower diesel mode along this part of the track until a solution for the bridge has been found’.

However, the stretch will from this autumn also be used by Class 387 EMUs operating as empty stock between Didcot and Cocklebury Sidings at Swindon, where they will receive overnight servicing.

NR estimates the 60mph speed restriction imposes a 25-second delay on trains passing through the bridge, compared to the linespeed of 125mph. For Class 387 empty stock movements it is estimated the restriction will add two to three minutes to the running time, taking up nearly an entire path. As a result, GWR will be required to bid for diesel timings (current HST timings) between Swindon and Didcot and will not be able to take advantage of the improved performance of the Class 800s. NR suggests the likely result is ‘a reduction to services from the current specification’.

A Network Rail spokesperson commented: ‘We are disappointed that the Vale of White Horse District Council rejected the planning application for the demolition and replacement of the railway bridge at Steventon. We are currently considering our options, and looking to submit an appeal, which will be initiated in September.’