Pinchpoint: a Southern Class 377 and a Thameslink Class 700 pass at East Croydon on 15 February 2017.
Steve Hobson

CAPACITY ENHANCEMENTS on the Brighton main line in Control Period 6 (2019-24) should proceed, but there is presently no case for a second route by reopening the Uckfield to Lewes route (dubbed BML2). That is the conclusion of a study by WSP Parsons Brinckerhoff into the London & South Coast rail corridor.

The study was commissioned by then Chancellor George Osborne in 2015. It proposes that Network Rail’s developing proposals for enhancements in CP6, principally in the Croydon area, should be the highest priority for the route.

The core CP6 enhancements anticipated include two extra platforms at East Croydon and grade separation of Windmill Bridge, Selhurst and Cottage Junctions. This is expected to allow an additional 2tph (trains per hour) into both London Bridge and Victoria. Looking ahead to 2043, further schemes would be required, assumed to be the options proposed by Network Rail for CP7 including grade separation of Keymer Junction and 24tph into London Bridge low level through a Digital Railway solution. This would allow a further 4tph to operate into either Victoria or London Bridge. More radical solutions such as remodelling at Clapham Junction and Victoria could form a further enhancements package to deliver additional capacity improvements at a later date. 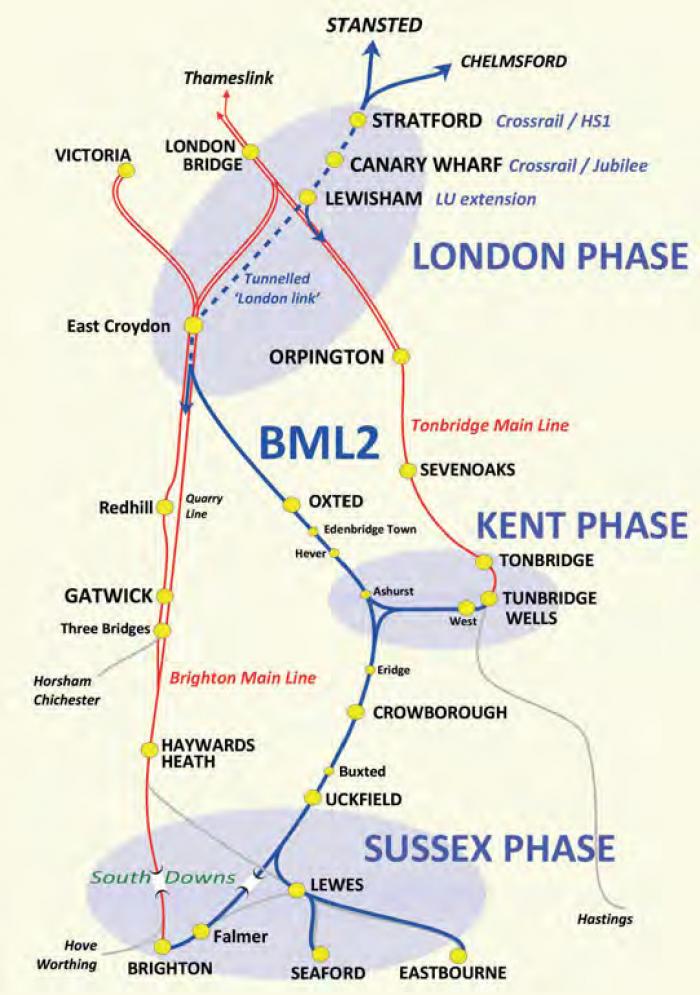 The BML2 group proposes reopening the Uckfield to Lewes line and fashioning a new route to Canary Wharf to relieve pressure on the Brighton main line.

The study says there is no need in capacity terms to start planning for new lines at this stage. Campaigners for BML2 have suggested reopening the Uckfield to Lewes section to provide a second route between London and the South Coast, but this option is ruled out as not having a transport case in its own right.

The study finds that journey times on this second route would be inferior to those on the current Brighton main line, while demand from the Uckfield line towards the South Coast would be insufficient to justify the reopening. Challenges with double-tracking parts of the Uckfield branch are also highlighted.

With regards to both proposals, the study suggests that a significant uplift in housing or commercial deliverable development could improve the business case, and that a new approach is therefore required which considers the need for investment within the context of the region’s economic ambitions.

Suggestions to build an additional route northwards from Croydon, either towards Lewisham and the Docklands area or a fast connection to central London, are also ruled out at this stage as being unnecessary, with such a scheme thought unlikely to be required until the 2040s/2050s.