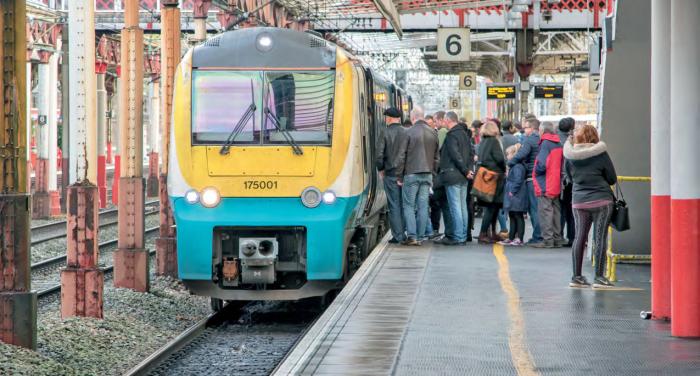 In Ernest Hemingway’s novel The Sun Also Rises the character Mike Campbell is asked: ‘How did you go bankrupt?’ ‘Two ways,’ he replies, ‘gradually and then suddenly’. 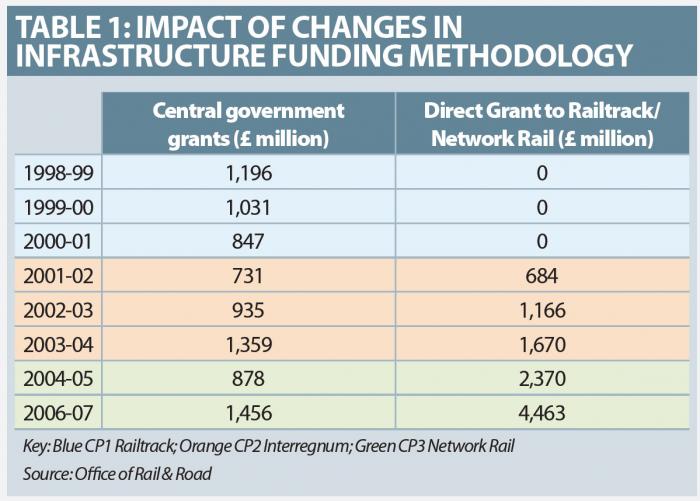 During the 24 years since the first passenger franchise operators took over, it became understood that, while the occasional franchise could fail, most train operators were meeting the financial obligations in their franchise agreements.

In 2012, the InterCity West Coast procurement scandal had been a shock to the system, but the appointment of a new Franchise Director appeared to have restored good order and we all moved on. However, a quirk of Network Rail’s funding arrangements contributed to a false sense of well-being.

In the very first Control Period (CP1, 1996-2001) all of the then Railtrack’s income came from Track Access Charges (TAC) paid by the passenger and freight operators (TOCs and FOCs). This was reflected in franchise subsidies.

In theory, this gave the operators some financial clout in dealing with their monopoly supplier. But by the time the Periodic Review for CP2 (2001-06) began, Railtrack was already in crisis. Some financial legerdemain was needed to give the resulting Regulatory Determination a veneer of credibility.

As part of the smoke and mirrors, the Department for Transport decreed that in future Railtrack’s funding should come in two parts. Franchised train operators would now pay only a portion of Railtrack’s income. These ‘Variable Track Access Charges’ would notionally cover the wear and tear imposed by each operator’s trains.

DfT would then top up Railtrack’s total income for the Control Period through a Direct Grant. Table 1 shows funding before, during and after the transition years. By the time stability was achieved Network Rail was getting approaching £3.5-4 billion a year in direct grant.

Table 2 shows what the TOCs were paying in Variable Track Access Charges (VTAC) in CP5.

And, boy, are they variable.

As you can see, they bounce around all over the place. This makes analysis of TOC subsidy/premium profiles a task for the stout-hearted.

Operators are saved harmless from changes in VTAC. If a TOC’s VTAC go up, it gets more subsidy or pays less premium to cover the difference.

VTAC are also recalibrated at the start of each Control Period. And in case you haven’t noticed they are calculated down to the last penny!

Thanks to the Direct Grant, from 2010-11 onwards, the franchised train operators collectively were paying more in premia than they were receiving in subsidy (Table 3). This led the Rail Delivery Group to claim in 2015-16 that ‘the £10.5 billion of revenue generated by the rail industry now more than covers the day-to-day running costs of the railway (£10.3 billion). Twenty years ago, the railway ran at a £2 billion loss’.

If we take 1997-98 as ‘20 years ago’, the TOCs had received £1.8 billion in government grants – near enough RDG’s ‘£2billion’. But that was the total central government support for the railway.

And by 2015-16, that £1.8 billion grant had been replaced with a premium paid to Government of £817 million. No wonder RDG was trumpeting the triumph of privatisation!

But as Table 3 reveals, this was a trifle disingenuous. In place of Railtrack relying wholly on the TOCs using some of their £1.8 billion subsidy to pay all their Track Access Charges, Network Rail was now also getting the thick end of £4 billion in Direct Grant.

Now, back in the present (about time too – Ed) the last line in Table 3 reveals that for the first time in eight years the passenger railway, collectively, was reliant on subsidy.

Could this be a reflection of the emerging franchising crisis? Time for another table.

Table 4 needs a ‘safe method of reading’ brief before being studied. The most important point is DfT’s convention for differentiating between subsidy and premium payments.

Subsidy being paid out is positive: premia being received are negative. To aid comprehension, subsidies are shown in red type, premia in black.

Some franchise agreements include cap & collar revenue share/support. If revenue is above forecast, a proportion of the gain is paid to DfT (revenue share). Similarly, if revenue is underperforming, DfT shares the pain (revenue support).

In some cases, a franchise, inconveniently for those mad enough to essay this type of analysis, can change hands during the financial year. In this case the results are combined to give a total for the year in question.

Finally, the right-hand column calculates the change in subsidy or premium for each franchise across the three years. Here a positive number means that DfT is paying out more, either because subsidy has increased or premium reduced.

Headline figure from Table 4 is that over the last three years the swing from net premium to net subsidy means that DfT is paying out an extra £1.1 billion to the franchised passenger train operators.

However, this is not the full story. As mentioned earlier, TOCs no longer pay the full cost of access. Both DfT and ORR allow for this in their cost data.

To do this, Network Rail’s Direct Grant is divided pro-rata between the franchised operators. This is termed the TOCs’ ‘Network Grant’. 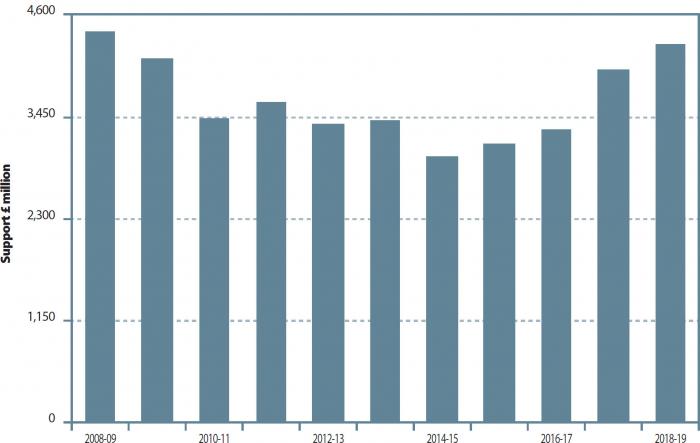 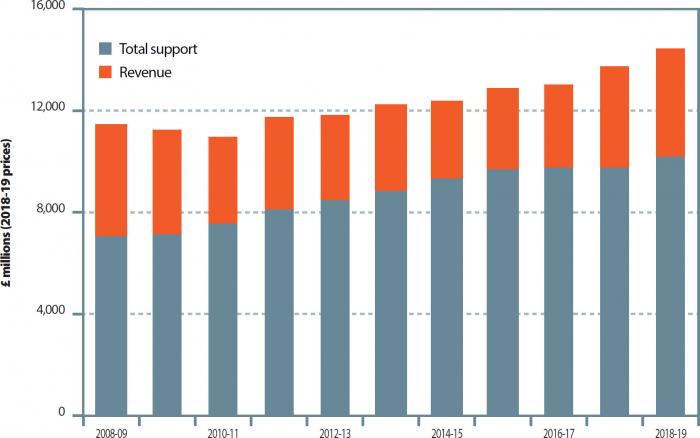 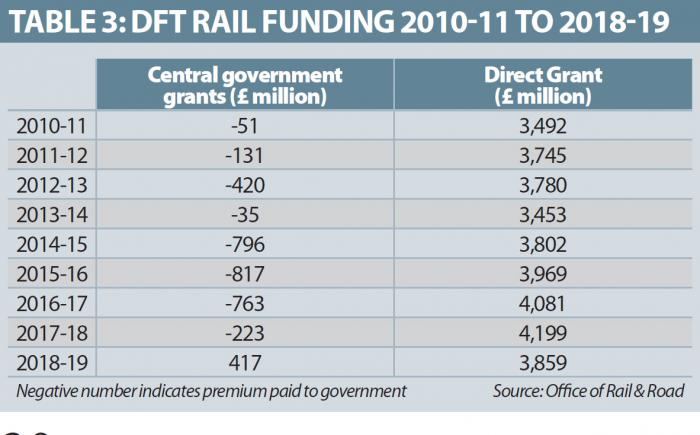 I’ve worked this out too, but thought it might be a table too far (Correct – Ed).

Over the three years covered by Table 4, the TOCs’ collective Network Grant has fallen by around £200 million. Allowing for this gives a net increase in support of around £900 million. For soundbite purposes I am splitting the difference and using a round £1 billion.

Figure 1 shows how support – net subsidy plus Network Grant – has changed over the last 10 years. This will not make happy reading for the Treasury. But focusing on subsidy tells only half the story. Government policy has been that funding of the railway should shift from the taxpayer to the traveller. Figure 2 shows how the railway is largely funded through the fare box.

But what must really gall Government about Figure 2 is that despite more money going in to the passenger railway, it is facing a string of failing franchises, with the Operator of Last Resort (OLR) on overtime.

And, by the way, I haven’t mentioned Government loans to Network Rail. Since 2014-15 they have totalled £31 billion.

So with all this money swilling around and ridership still rising, what explains the recent spate of failing franchises? The fatal flaw in franchising, as devised by the Government, is that its primary role was seen as reducing the cost of the railway to the state.

Yes, in the 1992 White Paper there was the usual blah about private sector entrepreneurial flair providing a better service for passengers, but the initial franchises were awarded to the bidder requiring the lowest subsidy. Not only that, the subsidy was expected to reduce year-on-year.

After Network Rail’s Direct Grant was introduced, for some franchises the criterion for success became the highest premium – increasing year-on-year.

If a franchise did not generate sufficient cash to pay the premium, the owner had to make up the shortfall. If a subsidy was insufficient to cover costs, the owning group had to pay to keep the franchise going.

These payments have been covered by what is known as Parent Company Support (PCS) in the franchise. PCS is based on DfT’s perception of the risk of the franchise failing and is capped. When the PCS piggybank is emptied the franchise defaults.

Clearly, shareholders of the parent groups need to be told if there may be trouble ahead. This early warning is being provided by the report and accounts stating an Onerous Contract Provision (OCP). 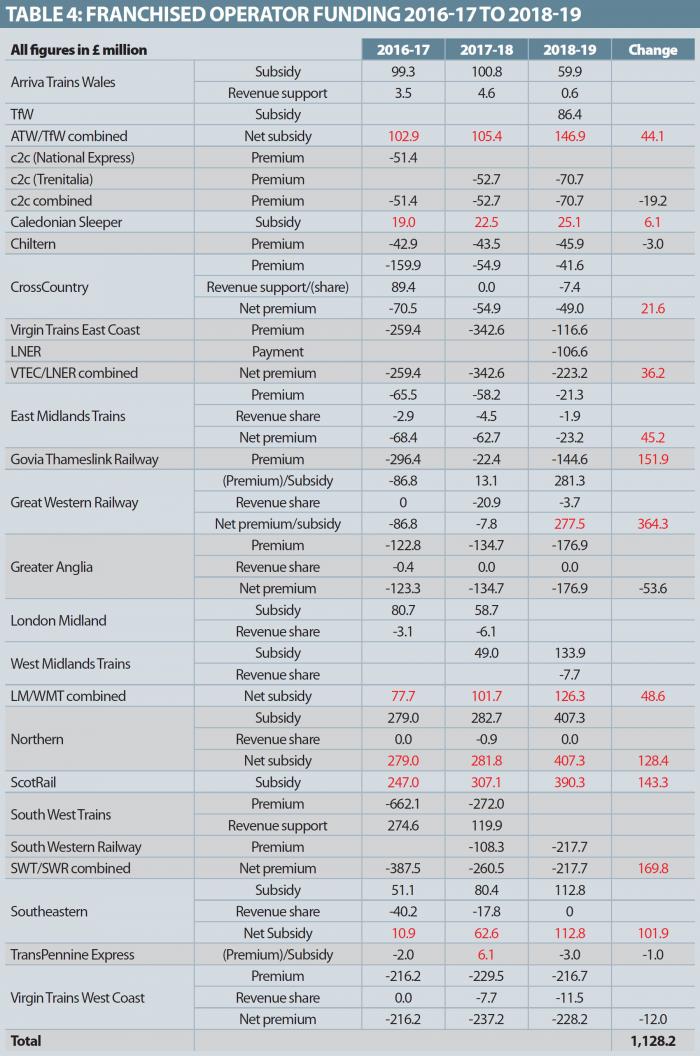 FirstGroup has reported OCPs for TransPennine Express (£106 million) plus £145.9 million for South Western Railway shared with its partner MTR Corporation of Hong Kong. Generally, OCPs represent the maximum liability should the franchise fail.

Details of the Parent Company Support (PCS) are redacted from the published franchise agreements. However, the method of calculation is specified in the Invitations to Tender.

DfT specifies a minimum figure, to which is added a percentage of the difference between DfT’s estimated baseline franchise payments (subsidy or premium) and the annual payments in the franchise bids.

Thus Northern’s baseline PCS is £40 million plus 7% of the difference. For South Western Railway the baseline is £45 million plus 6%.

Which brings us to the failing franchises.