SOUTH WESTERN Railway unveiled its new livery and brand identity at a launch event held in the former International Terminal at London Waterloo on 4 September.

Although First MTR took over the South Western franchise from Stagecoach on 20 August, the major works to extend platforms 1 to 4 at Waterloo were taking place, so the new operator deferred the launch event by two weeks. Unit No 444040 was re-liveried into SWR colours to mark the occasion, although the SWR brand itself went live when the franchise changed.

The event was attended by Transport Secretary Chris Grayling and senior representatives from FirstGroup and MTR, along with SWR managing director Andy Mellors. Unfortunately, the launch day was marred by several disruptions across the SWR network, including two failed trains and signalling problems. Delay repay compensation for passengers delayed by more than 30 minutes was introduced on the day of the launch event.

SWR plans a £1.2 billion investment during the seven-year franchise, including a new fleet of 90 Class 701 Bombardier Aventra EMUs for suburban routes and the introduction of retractioned Class 442 EMUs on Portsmouth line services. Existing trains to be retained will be refurbished, with improved Wi-Fi, at-seat charging points and on-board infotainment among planned improvements.

The international terminal is due to be brought back into permanent use in December 2018, in time for a new timetable which will offer a significant increase in capacity, notably including additional Reading and Windsor services, as well as faster journey times, more Sunday services and earlier and later trains. A second timetable change is planned for December 2020, taking advantage of the introduction of the new suburban fleet. By this point SWR says it will offer 52,000 additional seats into and out of Waterloo at peak times. SWR also plans to invest £90 million to improve stations, including major projects at Southampton Central and Wimbledon.

New brand: the logo is based on the map of lines out of Waterloo.
Courtesy SWR 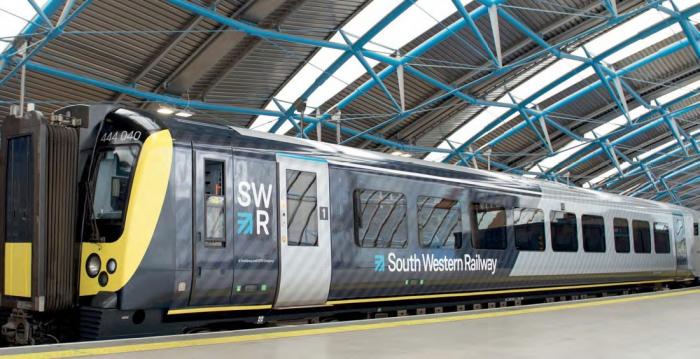 Launch train: the reliveried Class 444 at the launch at Waterloo International on 4 September 2017.
Courtesy SWR