THE FIRST trains have delivered aggregate to the new asphalt and aggregates facility that was portrayed on this page last month under construction by Tarmac at Washwood Heath in north east Birmingham. The plant will provide materials to support delivery of infrastructure projects in the city and wider region. DB Cargo is the operator of aggregates services from Mountsorrel quarry in Leicestershire using newly-adapted wagons converted from traditional coal hoppers. The facility was built on the site of disused railway sidings and will be entirely supplied by rail. The new facility is due to be fully operational this year and will feature technology to recycle and reuse asphalt from existing roads along with the capability to produce low temperature asphalts. majors had been anticipating. Resolution of the interminable Brexit debate – for better or worse – should at least improve the climate for commercial investment and the new Government seems to be set on a course of major infrastructure enhancement. Both these should do wonders for construction volumes, even before HS2 construction starts (which it surely must) and alone generates up to 15 extra trains a day. 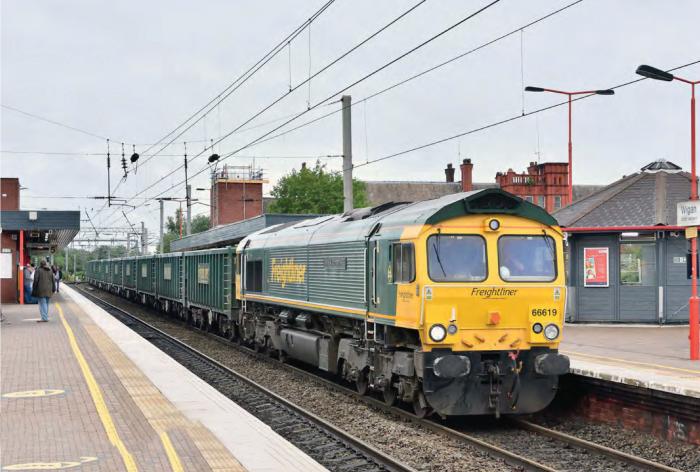 In response to this demand scenario, the major construction material companies are busily commissioning extra capacity at their quarries and cement works and are connecting (in many cases reconnecting) additional production units to rail. Already, Aberthaw cement works is forwarding trains on a daily basis to the South West, and Penyffordd (Padeswood) works near Chester is set to despatch cement by rail this year for the first time since the 1980s. New aggregate sources at Bristol and Thrislington have been activated and more will follow in the next year or two.

Similarly, the outlook in intermodal is very positive. Extra deep sea container trains are running from Felixstowe and London Gateway, whilst short sea container trains are set to expand significantly. The Q2 numbers include Teesport’s two daily trains to/from Scotland but not the two daily trains to/from iPort at Doncaster, which commenced in summer 2019, still less the daily train to/from Daventry that started in December. Further south, a daily train from Tilbury to Daventry was extended to Scotland at weekends. Expect to see more trains from Tilbury this year and similar trains starting from the Humber and Liverpool.

Inland, terminal developments continue apace – it was fashionable in some quarters a few years ago to take a sceptical view of Strategic Rail Freight Interchanges (SRFIs), on the grounds that they were merely ‘trojan horses’ to gain planning permission for large warehousing developments. Events over the last year or so indicate that such scepticism was profoundly misplaced. iPort opened in early 2019 and by the end of its first year was effectively full, with five trains arriving and departing each day. Nor was this at the expense of other terminals – Doncaster Railport, Wakefield and Leeds continued to prosper and new intermodal terminals nearby at Rotherham and Tinsley also attracted additional services.

The new East Midlands Gateway (EMG) SRFI opened at the turn of the year (served by a completely new 3km branch line from the Stenson to Sheet Stores route) and immediately started to receive new trains into its intermodal terminal that, when fully complete, will have nearly 10km of track. Very significantly, EMG is operated by Maritime Transport, the UK’s biggest container road haulier which has acquired intermodal terminals at Birch Coppice near Tamworth, Trafford Park, Wakefield and Tilbury as well as EMG. There could surely be no clearer endorsement of the future of rail intermodal than Maritime’s strategy.

iPort and EMG are far from being one-offs. Northampton Gateway was awarded its Development Consent Order in late 2019 and further back in the planning process are SRFIs at Etwall (on the Uttoxeter line south of Derby), Four Ashes (north of Wolverhampton), Hinckley and a second proposal at Northampton, as well as an already-permitted considerable expansion of DIRFT at Daventry. In all, there is over 50 million square feet of rail-connected warehousing in existence or in the pipeline, almost all of it in the ‘Golden Triangle of Distribution’ in the Midlands.

If we are to achieve Net Zero by 2050 there will need to be very significant modal shift to rail for long-distance haulage and it is only by direct connection to major sources of freight that rail can be competitive over anything other than very long distances, such as Anglo-Scottish. All these warehouses and more will be required, for rail-connected regional distribution centres around the UK as well as national distribution centres in the Golden Triangle in the Midlands.