The old-school shows how to do Digital Railway 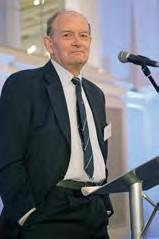 Resignalling of the Thameslink central core has been a long-running programme by any standards. That, until the arrival of David Waboso as Network Rail’s Director Group Digital Railway, Thameslink had been overshadowed by the Digital Railway mania was probably a blessing in disguise for the Network Rail project team and main contractor Siemens. That Siemens was also supplying the Thameslink train fleet further helped the cause. What characterises the Thameslink signalling, and was a key factor in the current success, has been the pragmatic approach to the choice of technology. Today it is fashionable, if ignorant, to decry multiple-aspect block-section signalling as ‘Victorian’. But that is the basis of the Thameslink scheme.

Modelling demonstrated that in normal operation 24 trains per hour (tph) could be achieved with three-aspect signalling.

However, this could not cope with rapid recovery from service perturbations. As a result, fixed block four-aspect signalling, based on Siemens’ Westlock Solid State Interlocking, has been installed, including mid-platform signals.

Overlaid on this foundation is the Level 2 European Train Control System (ETCS) with cab signalling. Note that ETCS Level 2 uses fixed blocks that determine the limit of movement authority displayed to the ETCS Driver-Machine Interface (DMI).

To increase capacity, additional intermediate ETCS ‘block sections’ have been installed within the physical track circuited block sections of the basic signalling system. These ‘virtual blocks’ mean that instead of the movement authority being limited to the signal protecting an occupied block ahead, the ETCS allows a following train to move closer to the train ahead, minimising platform re-occupation times.

And on top of ETCS sits the Automatic Train Operation (ATO). This receives its timetable and regulation instructions via the Packet 44 telegram facility in the ETCS Eurobalise. Packet 44 is the telegram allocated to non-ETCS data.

At the start of a journey, after the train’s headcode has been entered, the ATO system downloads the service’s updated timetable for the central core. This includes run and station dwell times.

ETCS Level 2 uses a Radio Block Centre (RBC) to transmit signalling information to and from the train’s Vital Computer. When a Thameslink train arrives at the start of the ETCS area it ‘signs in’ with the RBC.

In turn, the RBC alerts the Automatic Train Regulation (ATR) system for the ATO that it has a specified train with ATO operational.

The ATR then sends the train a message updating the running data.

With the train running under ETCS, the ATO ‘on’ button starts flashing. When selected, the train enters ATO mode. In addition to accelerating and braking in line with the stored running instructions, the ATO also opens the doors automatically when the train makes the next scheduled station stop.

Dwell times are critical, with a 45-second target time. The driver is given a countdown, which starts when the doors open.

This allows 22 seconds to make the platform checks and close the doors. With the doors closed the ATO ‘on’ button starts flashing, and pressing the button initiates ATO and the train departs. Meanwhile, the train has reported its arrival and departure time to the ATR central computer.

These are compared with the stored timetable. If necessary, the ATR provides the ATO with a revised run profile; for example, if the train is running late it will accelerate harder. 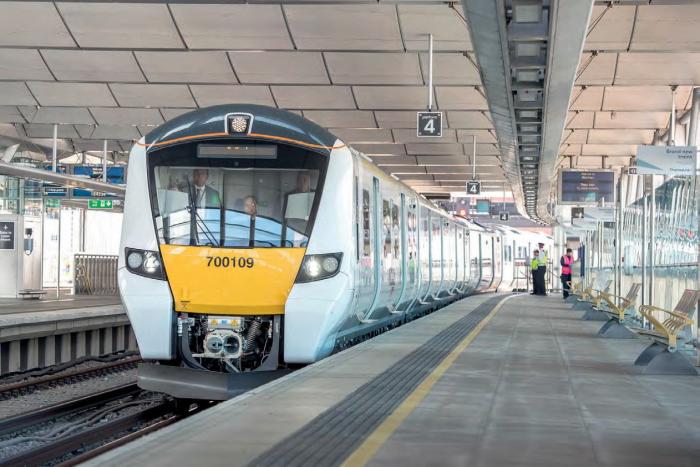 With the advent of ‘professional driving’, plus the impact of the Train Protection & Warning System (TPWS), the classic approach of passing the platform ramp at speed and coming to a halt in a smooth deceleration is no more. Even outside leaf-fall time, trains arriving at my local station slow well in advance and then crawl the length of the platform at not much more than walking pace.

That may be acceptable on the outer sections of the Thameslink network, although it may need reviewing when service intensification requires trains to arrive at the central core portals to within half a minute or less. However, for the high frequency metro service through the Thameslink central core you have to drive hard. Note station arrivals on the Victoria Line where you can hear that the ATO is in regenerative braking for the length of the platform.

On the Thameslink press run on 26 March, after ATO was initiated, my notebook records ‘hard acceleration’ followed by ‘hard deceleration to a sharp stop’. Several of us noted some slight juddering from the wheels at that first stop, as if the wheel slip prevention system on the leading bogie was intervening. Restarting, the acceleration was characterised as ‘sharp’. 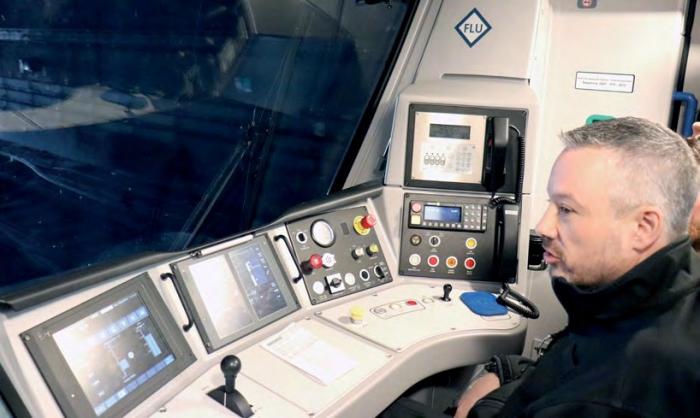 Sit back and observe: driver Howard Weir in the cab in the central core on the ATO demonstration day, 26 March 2018.
Philip Sherratt

There’s no point in being able to run 24 trains per hour (tph) through the central core if you can’t regulate the trains to arrive at the portals on time and in the right sequence. This is the role of the Hitachi Tranista Traffic Management System at Three Bridges Signalling Centre. This was due to go live the day after the press trip.

Initially it will be supporting train planning by analysing the next day’s timetable, looking for conflicting movements and proposing possible solutions. It is due to be providing real-time traffic management and route setting by ‘the back end of the first quarter of 2019’, in other words just before Thameslink train frequency steps up to 22tph with next year’s May timetable.

As the Siemens WestCad e control system at Three Bridges does not include Automatic Route Setting (ARS), routes will be set manually until then. When I suggested that working without ARS might put some stress on the signallers in the peak, I was told analysis of individual workloads suggested this will not be a problem, although some workstations may be double manned.

Tranista will download a ‘perfect’ timetable, which Westcad e will run. This timetable will reflect the recommended revisions proposed by Tranista in the event of disruptions. As previously explained, signallers at the northern Thameslink fringe boxes (West Hampstead and King’s Cross) will receive these changes for manual intervention via ‘Isolated’ TM displays, otherwise known as Operations Decision Tools (ODTs).

This raises the philosophical question of whether interfaced TM, which is based on a strategic overview, can also do the job of ARS, with its tactical role of sorting out junction conflicts or setting routes into platforms while the signaller is otherwise occupied. More on this at a future date.

Of course, with ETCS and ATO the train is even more part of an integrated system. As New Train TIN-watch is showing, the new generation of software enabled trains, notably the Thameslink Class 700 and Crossrail Class 345, have been even less enthusiastic when it comes to working out of the box than their analogue or first generation digital predecessors. Reliability growth is also managed differently. In the olden days, you developed a mechanical, electrical or software modification, introduced it across the fleet and that was that.

However, a fully software-enabled train is more like a smartphone. My Samsung regularly tells me it has a software upgrade ready and when would I like it installed? Similarly, the Class 700 fleet receives regular software upgrades, known as ‘drops’.

In 2017 there were nine software drops forming part of the performance improvement plan. Every ‘fault’ with the potential to cause problems is analysed and the solution goes into the next drop.

This year six drops are planned, including three by the end of May. But that won’t be the end of the matter. Programmed software drops will be a feature of the fleet throughout its life.

ETCS software, which has to interact with the train’s on-board computer system as well as the outside world, is also being updated in a series of drops as running continues.

For ATO you need ETCS Level 2. At the time of the inaugural run 50% of the Class 700 fleet had Level 2 Software active. 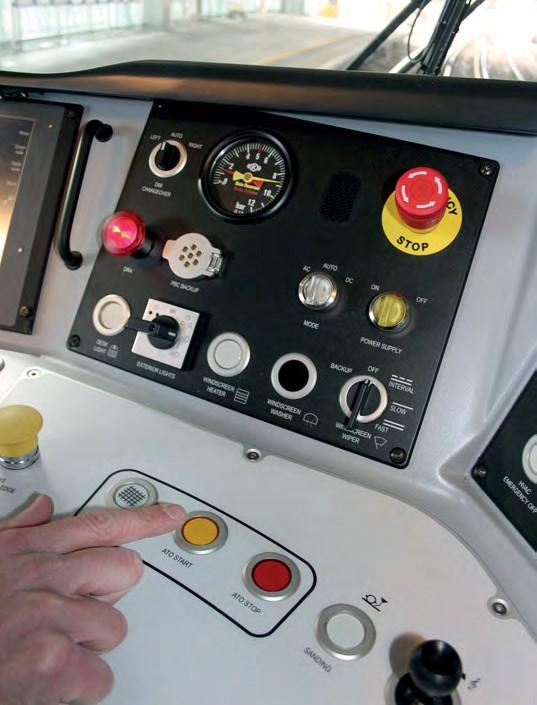