A TIMELY LOOK AT PORTS AND RAIL 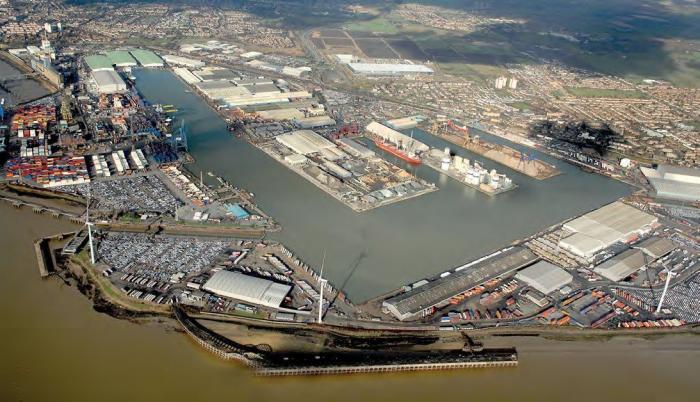 Expansion planned: aerial view of the existing port at Tilbury, with the container area on the left hand side that is linked by rail to the c2c line at Grays. The site for Tilbury2 is off this photo to the right, with the old Tilbury fort in between the two sites.

Reviews come and reviews go, or so it seems in the railways. Hendy, Shaw, Bowe, Brown, McNulty, David Quarmby’s review into winter salt supplies, the list goes on. Some of course have been more instrumental in driving change than others; some, like the Stern Review, made big changes in policy affecting the railways even though its topic was climate change. Yet mostly, over time, they are forgotten.

The outlier to this rule is the 2006 Eddington report into ‘Transport’s role in sustaining the UK’s productivity and competitiveness’. Over a decade old now, some parts are dated, but for the most part the challenges cited, and the solutions proposed, still resonate today. In particular, Eddington highlighted the need to invest in key inter-urban routes and international gateways, recommendations that have helped underpin the investment funding for rail freight in subsequent control periods.

Understanding the links between transport and economic prosperity is as important now as ever on the dawn of Brexit. Eddington himself noted ‘increasing international connectivity may yet have an ongoing role in enabling new trading relationships that could unlock significant growth benefits’. So it is not perhaps surprising that the Department for Transport is undertaking a new low-key review into ports connectivity under the leadership of Sir John Randall. Although no formal remit has yet been published, there has already been some engagement with his team, who are looking to understand what should be addressed to ensure the ports sector can continue to most effectively deliver for the economy in changing circumstances.

Recently, RFG members were able to enjoy a tour of Port of Tilbury, and to understand more about its expansion proposals, and its revised plans for new rail freight services. What is always striking on such a visit is the sheer diversity of business that takes place at most ports. Tilbury, for example, handles cars, containers, paper products, grain, dry bulks, roll-on/roll-off (ro-ro) and even the odd cruise ship. On top of this, there are businesses established on the port estate or in the hinterland that provide local and national distribution and services, including warehousing, storage and added value facilities. Ensuring the right connections is as essential for these companies as it is for the products coming ‘over the quay’. Indeed, a new rail service expected to start shortly from Tilbury will move recycled glass for use elsewhere in the UK.

If you ask the leaders of these businesses about the impacts of Brexit, you will get a mixed response, but there is a clear expectation that patterns of trade are likely to change, with direct impacts on the ports. What is unclear is what the new trends will be. Common discussions are around the ability of UK Government to achieve ‘frictionless’ trade, particularly for ro-ro lorry traffic, which is effectively customs-free today. Any delay or congestion on these routes could switch businesses to other less congested ports – effectively away from the Dover Straits to Purfleet or East Coast ports. Equally, a shortage in road drivers, many of whom are from the mainland European Union, could move traffic from accompanied to unaccompanied or even lo-lo (load on/load off), again switching the pattern of ports. Dover and Eurotunnel will naturally counter, acting to retain and grow their traffic, and are already making active plans for this.

Elsewhere, a shift in the balance of trade from the EU to (for example) the Americas will increase the importance of trade routes to west coast ports such as Liverpool and Bristol. East coast ports could benefit if there is a reduction in direct UK calls, with more transhipment of UK volumes from hubs such as Rotterdam.

Some ports are also keen to explore the concept of ‘free ports’, where tariff-free zones are established around port estates. This can be good for on-site manufacturers and warehousing, but raises questions of scale and scope, and the impact on other domestic manufacturers outside the zone. Nonetheless, there could be some opportunities around particular clusters.

This all acts to create opportunity for rail freight to serve new and expanded port markets, and to help existing ports thrive and deliver for their customers in renewed trading arrangements. The DfT’s study will be an important assessment of what is needed to support this, both in investment and in public policy development.

As Eddington noted, ‘History has shown a compelling link between the transport system and economic prosperity, with new transport connections enabling new economic relationships to be forged’. His words must now become reality.