The RSSB put numbers on our pain. But will the DfT hear the cries of the tortured? 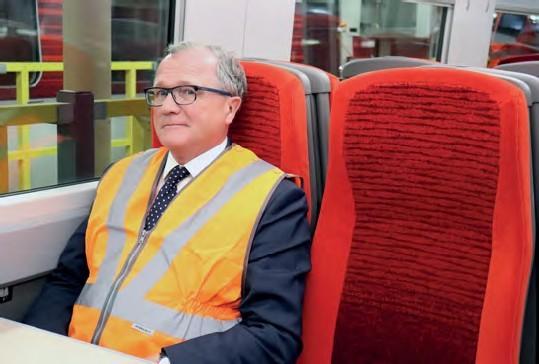 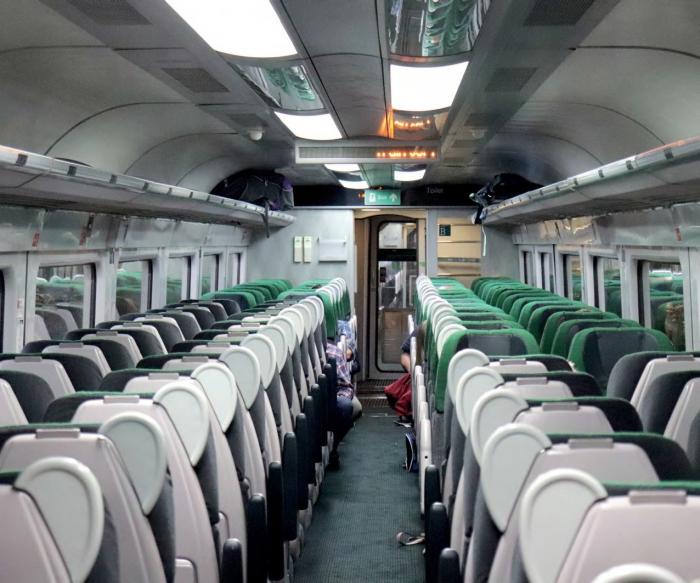 Well that took a while. The second article I ever wrote for Modern Railways, in October 2007, called for a seat comfort standard. I hope I haven’t bored you too much, but there has been a repetitive strain of articles in the meantime. Even the Queen was moved to specify Networkers over Class 700s to Sandringham, being one of the few with a say in the matter.

A Siemens engineer apologised to me for the seats in ‘700s’, correctly blaming the customer, and the press reaction to their introduction coined the phrase ‘ironing board seats’. I think this was a version of a designer’s description I picked up, which was ‘café seats bolted to an ironing board’, but at least it precipitated action.

THEY SHALL NOT PASS

The Rail Safety & Standards Board created project T1140, ‘Defining the requirements of a seat selection process’, where academics investigated seat comfort from the bottom up (sorry, couldn’t resist; there may be more). When the project was announced I noted that if the seats going in new trains are deemed acceptable then the test must be wrong. I am delighted to say that existing seats do not pass, except maybe for very short journeys, such as down to the paper shop.

Correctly the report identifies four levels of expected comfort based on journey type: metro, regional, inter-city and First Class/ very high speed. This is interesting as it lumps in First Class with very high speed, on the not unreasonable assumption that the top-flight train in the country should impress in more ways than just journey time.

The obvious problem with making a train seat comfortable for everyone is that it has to accommodate people from little women to big, tall blokes (Editor: don’t red pen that as sexist, the report covers the 5%ile female to the 95%ile male, and I have yet to hear of a man complaining his feet don’t reach the floor, although I’m sure there are some). Importantly, in every case I have been involved with, the seat is chosen by the managing director, who is usually tall, male and only interested in how cheap it is.

After he has sat in it for a few minutes, the seat is inflicted on passengers – with only safety approval required. T1140 offers numbers that account for a range of passengers, scientifically arrived at through validated testing. At last, a way that a seat can be defined as ‘comfortable’, other than just me moaning that it isn’t.

GOING TO THE CHAIR

The test chair was a sort of train seat version of the glasses they put on you for an eye test. Resembling an electric chair, all the comfort parameters could be adjusted: base height, armrest height, angle, neck support, depth, hardness and width. One instrument used, the Indent-O-Meter, sounds a bit ‘Wallace and Gromit’, but we can work out what it does, scientifically measuring the ubiquitous Fainsa by comparison to a patio slab. Less obvious are your ‘ischial tuberosities’, known only to medics and pub quizzers as your sitting bones – ‘large swellings on the underside of the pelvis’. I’ve got those.

An ergonomist evaluated the sitters on how well the seat ‘fitted’, on the basis that the more of the person is in contact with the seat the less pressure will result. I was surprised they didn’t use pressure mapping, but they say that is not such an accurate indicator. After all, a softer cushion contacts more area – so I’ll go with it.

Different people value different accessories differently. For example, a cup holder that fits a long-departed caterer’s cups is of less value than a razor-sharp armrest, and a padded armrest is better still. Magazine racks full of month-old detritus are of less value than USB ports. Flip-down tables hiding inventive graffiti – well you get the idea.

Consequently, accessories have their score ‘weighted’ like in tender bids, so fitting a plug socket doesn’t make up for an unpadded seat. Sitters often took a dislike to a specific point, like the back height, which then coloured their view of the whole seat. I see their point: on a Voyager the other day, the toilet smelt like a full latrine – which coloured my view of the whole train. Easily done.

This far, apparently not, since according to recent surveys, 67% of passengers enter ‘satisfied’ or ‘good’ on seat comfort, proving that the other 33% were on new trains. But overall that is below the 83% who said they were satisfied with their journey, so, logically, improving the score of the seat will help boost the overall score closer to the target 90% by 2035. 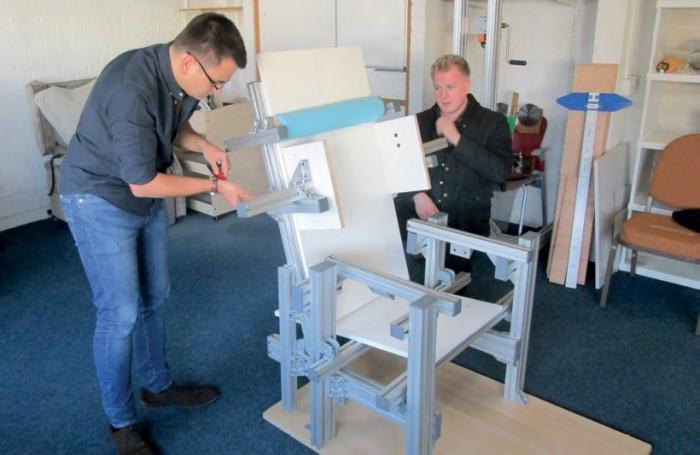 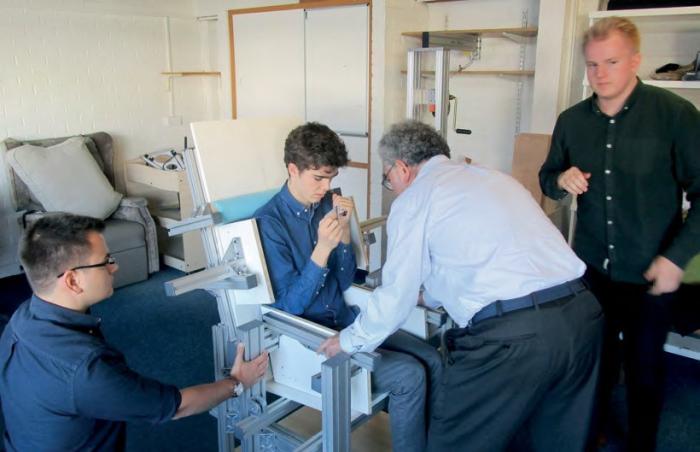 We promise: it won’t hurt. But is it comfortable? Courtesy RSSB 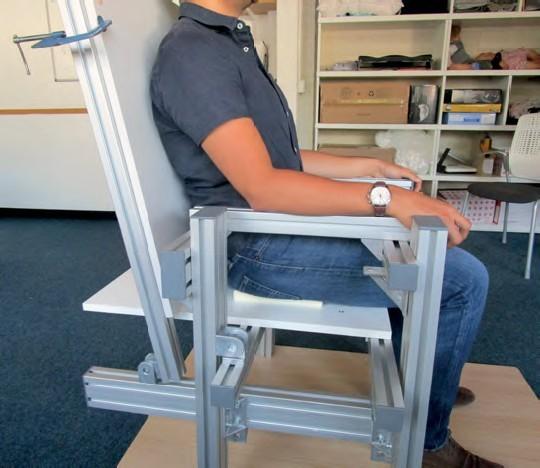 Indent-o-Meter: how far do the ischial tuberosities sink? Courtesy RSSB 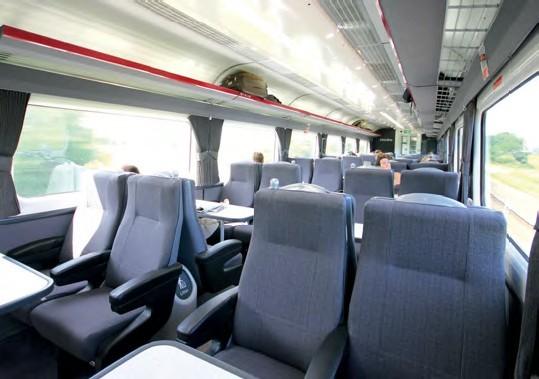 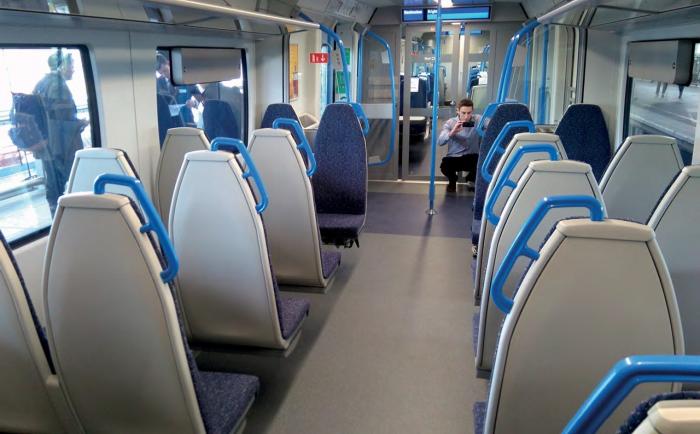 Origin of the ironing board saying: Class 700 interior. Philip Sherratt

Surveys aside, how can we really hope to compete with cheap flights or cars when the seating in either mode is far better than on rail? British Rail understood this and spent a lot of time and money developing seats that passengers liked, but in recent years we have seen a race to the bottom (I did warn you).

The only people with any say in seat design have been the representatives of disabled people, who gave us the 450mm-wide ‘priority’ seat. These eight (or so) seats per vehicle set the standard because it costs too much to make a separate design for them, but 450mm width only gives you a ‘yellow’ score in the report, because as regular readers will know we are mainly wider than that at elbow level, at least with our clothes on.

450mm results in ‘manspreading’ into the aisle, which confounds the spreadsheet measuring the standing area. Experience shows a 50mm spacer, giving an effective seat width of 475mm per seat, gets you a ‘green’ (pass) mark. Look at that – it really works!

The ‘manspreading’ thing is a form of validation, but there are a lot of other parameters to validate before the findings can be said to be proven. Seven seats were lined up for a range of victims to sit in and rate for comfort, scoring 1 to 7. There is a photo of them in the report, but I’m pretending not to recognise them as I’m told ‘this is not about marking homework’. Familiarly, no one is to blame, and I suppose a headline like ‘scientific proof that all new train seats are uncomfortable’ isn’t what the RSSB was looking for.

The validation was pretty good, or scientifically speaking ‘high end of a moderate positive Spearman’s rank correlation of 6.43’. Most importantly, the bad ones were at the bottom in the model and the test, which is all we really need to know. None of the seats met all the criteria, and only a couple passed the Indent-O-Meter test, Gromit.

Lumbar support always comes up with seat design, but to be effective the sitter needs to wedge their bottom right into the back of the seat. Even if they happen to be an ex-fighter pilot and start off like that, vibration and a vain search for comfort will steadily propel the victim down the seat. Here I single out what is possibly my favourite sentence in any report I have ever read: ‘The seat slowly and repeatedly rejected the sitter’ Comedy gold, right there. HSTs with the high-back Grammer seats are a good example of this, where after a few miles there is barely anyone above window level, passengers slump around like a rough Saturday night at A&E.

It would be nice by now to have heard from the DfT: ‘Thanks for that, we will put it in all new franchises’, but the Damascus train doesn’t call at Great Minster House. The default option will be to leave it to the franchise bidders to decide to apply the standards or not. Since a bid with compliant, comfortable seats will be more expensive and have less theoretical capacity than one with ironing boards, what do you think will happen? The results from this excellent and much needed work will be integrated into the ‘Key Technical Requirements’ (KTR) document. This includes a lot of good stuff – I know this because I put it there – but to date it has been widely ignored. A solution to almost everything that is wrong with trains today is included in the document but it is only advisory, not mandatory. Consequently, putting the definition of a comfortable seat there is fine, but it almost certainly won’t get used.

Yes, it gives people like me the proof that a new seat is not comfortable, but when there are a few thousand fitted and more on order, what good is that? If Williams wants to put the customer first, he could do a lot worse than dust off the KTR document and make it law, as was done with the disability regulations.

Ex-Rail Minister Jo Johnson claimed the new seats would get more comfortable with wear, which gave us a good laugh. But there is an element of half-truth, because we get used to harder and harder seats. Our expectations are managed downwards train by train, but that doesn’t work on someone moving from EasyJet or company car. They just see a hard, uncomfortable seat. This is an opportunity for change.