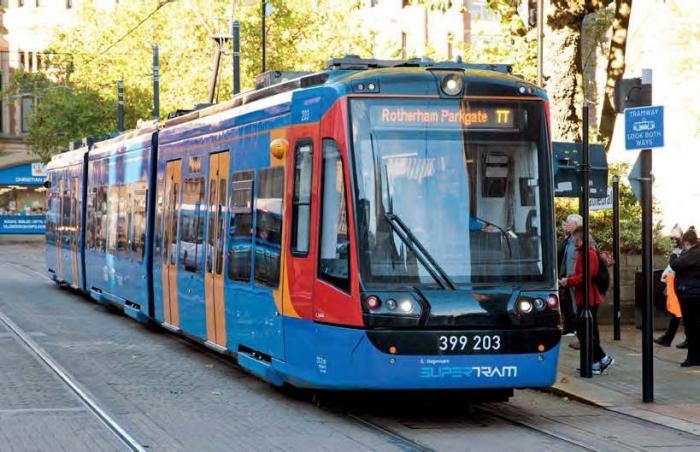 First public service: No 399203 leaves the Cathedral stop with the 09.39 departure to Rotherham Parkgate on 25 October 2018.
Tony Miles 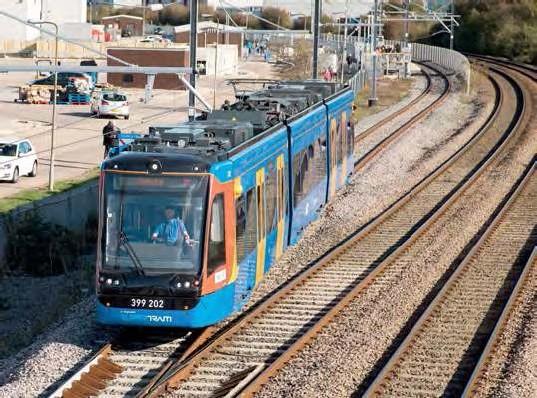 THE UK’S irst tram-train service was launched on 25 October, over 10 years after the project was irst announced.

Project partners from Stagecoach Supertram, Network Rail, South Yorkshire Passenger Transport Executive (SYPTE) and the Department for Transport, along with other guests, witnessed the then Rail Minister Jo Johnson and Mayor of the Sheield City Region Dan Jarvis formally inaugurate the service at the new Rotherham Parkgate stop. After guests were carried back to the Cathedral stop in Sheield city centre on-board tram-train set No 399204, the irst passenger service departed from Cathedral at 09.39, worked by No 399203.

However, the opening day was marred by a collision between one of the Class 399 sets and a lorry at the Staniforth Road/Woodbourn Road junction, causing the tram-train to derail. Police reported no-one was seriously injured in the incident, which forced the suspension of the service between Sheield and Rotherham until the following day.

Three tram-trains an hour are operating between Cathedral and Rotherham Parkgate, leaving the Supertram network after the Meadowhall South/Tinsley stop and travelling over the new 400-metre Tinsley Chord to join Network Rail tracks, calling at Rotherham Central station en-route to the Parkgate terminus. The three services are not spaced equally through the hour due to the need to ind paths between heavy rail services operating on the line through Rotherham.

The station at Rotherham Central has seen its existing two platforms extended to the south with new low-level sections served by the tram-trains. On the irst day of operation some concerns were raised by Supertram staf over the possibility of passengers used to crossing Supertram tracks at ground level trying to do the same at a station served by heavy rail trains. Whilst there is a low-level barrier between the tram-train platforms at the station, it was suggested more warnings should be in place.

The seven Class 399 Vossloh (now Stadler) tram-trains are equipped with both 750V DC and 25kV AC equipment; whilst the overhead wires can handle the higher voltage the route is currently electriied at 750V DC along with the rest of the Supertram network.

Extensive work at the University of Huddersield was needed to develop a wheel proile that works on both the Supertram and Network Rail tracks, with their difering railhead proiles. The inal solution reduced wear rates and mitigates against the risk of derailment, especially around switches and crossings. RSSB clearance was required to allow the use of this new proile on the tram-train vehicles.

The Class 399s are also itted with Train Protection & Warning System (TPWS) and GSM-R equipment to allow them to operate on Network Rail tracks. The Network Rail section has been resignalled using axle counters as it was feared the lighter-weight vehicles might not activate track circuits reliably.

The new service bears little resemblance to the project announced in 2008, which would have seen bi-mode diesel and electric tram-trains running onto the Penistone line in South Yorkshire. This plan would not have involved any on-street running and in 2009 the revised plan to run of the existing Supertram network via the Dearne Valley line to Rotherham was announced, originally slated for opening in 2015. As speciications and the project scope changed the cost of the project rose from the initial £15 million budget to over £75 million, leading to a highly critical parliamentary report in 2017. 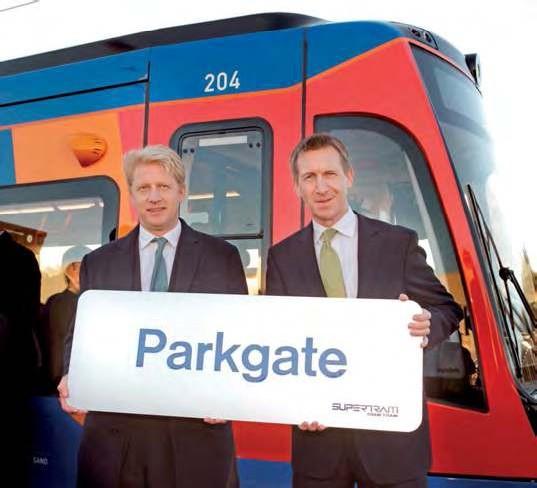 For SYPTE the project marks the irst extension of the Supertram network since 1994. The organisation believes even the tram-train project itself ofers opportunities for expansion, with the potential for extra stops on the route through the construction of smaller tram-train stops between heavy rail stations. However, SYPTE told Modern

Railways ‘Our colleagues in the city region have aspirations to expand the concept across the region and diferent heavy rail routes have been looked at. We’re looking at this pilot phase to test the technology, and we’re looking at the patronage and how people respond to it. All of that will feed into the desire and the ambition to expand the network; but these things are not cheap and they’re not quick.’

SYPTE expects the initial two-year trial to see people taking end-to-end journeys over what is a popular commuter route, noting that timings are very competitive against making the same journey by car. Opting to use heavy or light rail services from Rotherham Central may depend on whether passengers want to access the centre of the city or the main railway station for onward journeys. Tony Miles 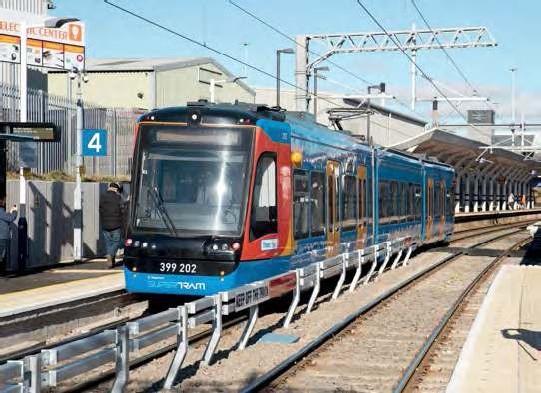 Rotherham Central: No 399202 departs from the new low-level platforms while working the 12.01 service from Cathedral to Parkgate on 25 October 2018. Note the barriers and notices warning passengers not to cross the tracks.
Tony Miles