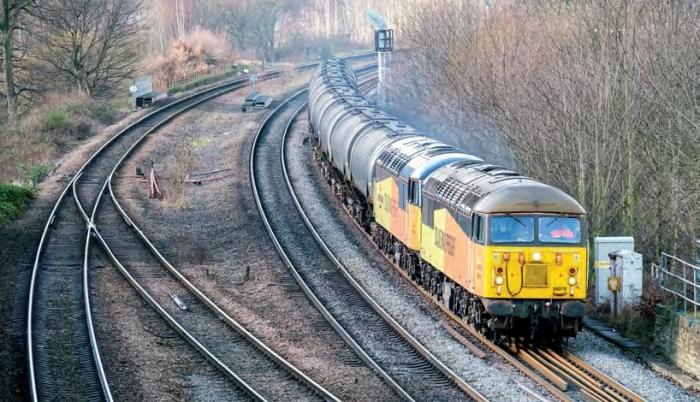 Set for an upgrade: this is Mirfield on 11 February 2019, where quadrupling is planned. This is currently a three-track section of railway, with the middle track from Mirfield East Junction to Thornhill LNW Junction being bi-directional; having only three tracks is a significant capacity constraint on what is a busy stretch of railway.
Russell Wykes

A CONSULTATION was launched in September on proposals for upgrading an eight-mile stretch of the trans-Pennine route as part of the line’s upgrade, ahead of submission of a Transport and Works Act Order application.

The £2.9 billion project covers the stretch between Manchester and York, with a target journey time of 67 minutes between Manchester Victoria and York with two stops. Network Rail is to consult on plans for the stretch between Huddersfield and Westtown (Dewsbury), which include doubling the number of tracks from two to four, electrification, grade separation of the junction at Ravensthorpe and major upgrades to stations at Huddersfield, Deighton, Mirfield and Ravensthorpe.

NR is aiming to submit a Transport and Works Act Order application to the Secretary of State for Transport in autumn 2020 to obtain legal powers for new infrastructure outside the railway boundary. The first phase of consultation will close in late October, followed by a second phase next spring. A decision on the TWAO application is expected in 2022, after which work would start immediately.