05.30 AT Bristol Temple Meads is the chosen venue for the launch of the IEP revolution on the Great Western. Platform 15 fills with managers and the expectant media, unused to being in action at this hour. Unusually there was no press welcome or obvious contact, but we all awaited the arrival of the IEP shown as forming the 06.00 to London Paddington. The first sign of trouble was a platform alteration, announcing an HST as forming the 06.00, now in the platform with reservations being hastily applied. The IEP sets had failed with a Train Management System (TMS) problem, and Transport Secretary Chris Grayling had disappeared. Then it’s all change again, the train is now working again and will be leaving at 06.20.

It duly arrives and first impressions are good: it is very brightly lit, if a little austere with the hard seats and grey trim. Engine noise is minimal with very little vibration, although the hum from the auxiliary converter is noticeable in the first class, which has no engine under it. When powering away from stations the engine is noticeable but over about 80mph general rail noise dominates, recording 70db(A), about average for Voyagers and the like, slightly higher than an HST.

The interior is a fairly comfortable 19 degrees, with the ceiling ducts recording 22 degrees, so the train is heating up. The doors are pressure sealed and this is noticeable every time they open and close as my ears ‘pop’, like in an aeroplane. This gets quite irritating after a while, but the worst issue is the condensation. As we pull away this drops a good few pints of water onto seated passengers, possibly seeing off a laptop.

By Swindon it is getting busy so I gave up my seat to farepayers, and the air conditioning is becoming a serious problem. Windows are misting up and passengers are shedding layers as it reaches 24 degrees, 26 at the ceiling with 100% humidity.

At last we reach Maidenhead, the big moment when we can switch to electric. Immediately there is a full brake application and we come to a stand at Taplow. There is an apology for a ‘minor technical problem’ and a call for maintenance assistance. After blocking the main line for 15 minutes the engine fires up again and the train begins the slow fight back to linespeed, but 125mph crush-laden on diesel is not going to happen; we reached 108mph by Ealing Broadway, when the brakes come on. By now the interior is seriously uncomfortable and as we approach Paddington there is a minor disturbance as someone has passed out (although I couldn’t move to verify this). Our little band of standees in the gangway, baggage and luggage area have adopted a stoic attitude until someone says: ‘it’s a joke’. ‘Not if you’re paying five grand a year for it’ a young lady replies.

What a relief it was after the guard had checked the platform at Paddington was still there and finally opened the doors. One Hitachi engineer said to me ‘this is the set that did 5,000 fault-free miles’; ‘pity it couldn’t manage a couple of hundred more’ I replied.

While trying to emphasise the good – yes, it’s new, shiny, rides well and isn’t noisy – there is no escaping the bad – the event was a fiasco. Maintenance was blamed for the water. This was condensation, which on most trains drains to a gutter, but on IEP needs a pump – which can’t cope with a night in a hot depot. Apparently the pantograph was isolated, not a triumph of organisation.

The two sets scuttled off empty to depot in disgrace and I picked up an HST back to Didcot to catch the next IEP. The HST was such a relief with working air con and soft seats, but just before I got on I noticed a film crew around the statue of Brunel. I think it was crying.

The second trip was a lot better, all the vehicles had working air conditioning, and I made it to first class which has marginally better seats. This time the pan did go up at Maidenhead and the train powers up accordingly. At 125mph the ride starts to get a bit livelier, rather like an HST, and there is a panel buzzing somewhere, so it is not brilliant.

A TV reporter asked me what I thought of the new ‘bullet train’, deliberately provocatively no doubt. It is a commuter train, it is not a bullet train, not even an inter-city train as we understood it a few years ago. It is functional, it will do the job when the problems are ironed out, but it is nothing special. As if to gloat, a few minutes after us Tornado steams in with a rake of Pullman coaches. A band plays, happy children wave as Paddington Bear poses for photographs. That’s how you do it. 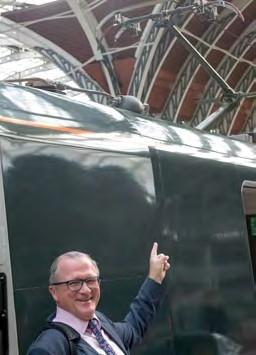 Pan up: at last. Ian Walmsley at Paddington on 16 October 2017.
Tony Miles 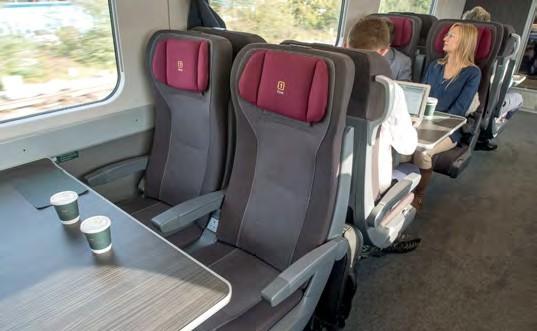 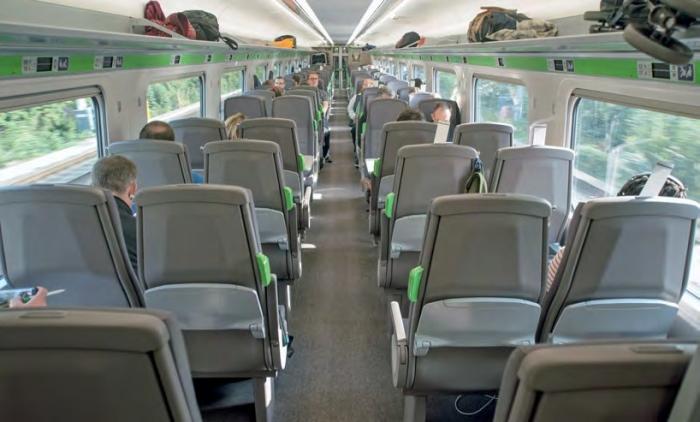