WINNING BIDDER TO OPERATE CLASSIC LINE PRIOR TO HS2 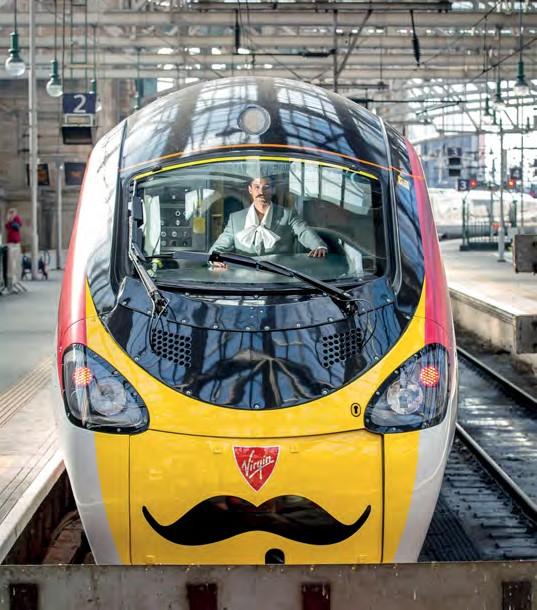 Mackintosh at the controls: to celebrate the 150th anniversary of the renowned Glasgow architect Charles Rennie Mackintosh, Virgin Trains named Pendolino No 390008 after him at a ceremony at Glasgow Central on 19 March 2018. Courtesy
Virgin Trains

THE NEW West Coast Partnership franchise will begin in September 2019, with the winning bidder operating classic West Coast main line services and also, subject to satisfactory performance, the first five years of HS2 services from 2026 to 2031. There will be an option for the Secretary of State to extend the term by up to three years.

Publishing the Invitation to Tender (ITT) for WCP, the Department for Transport has set out its requirements for the franchise.

Three bidders have been shortlisted to operate the new franchise:

■a joint venture of FirstGroup and Trenitalia;

■a joint venture between MTR and Guangshen Railway, supported by sub-contractors Deloitte, Panasonic, Snowfall, Trainline.com and WSP Parsons Brinckerhoff; and

■a joint venture between Stagecoach, Virgin and SNCF (French Railways).

All bidders were required to demonstrate their experience of high-speed operation prior to being shortlisted.

The ITT notes the possibility of restricting the number of franchises bidders may operate, particularly in relation to the proposed East Coast Partnership, which DfT says will be introduced from 2020.

The ITT says further details on the process for appointing the East Coast Partnership operator will be released later this year.

As previously announced, the successful bidder will become the shadow operator for HS2 from the start of the franchise, assisting with the design of the high-speed services and the reconfiguration of classic services. The shadow operator’s areas of focus will include timetabling, the on-train environment, fares, smart ticketing, station facilities and passenger information. During this phase the WCP operator will enter into a Partnership Protocol with HS2 Ltd, committing to joint and collaborative working.

From 2026 the Partnership will move to an Integrated Operating Contract (IOC). The WCP will run the initial HS2 services, with the London to Birmingham stretch (Phase 1) due to open in 2026 and Phase 2a onwards to Crewe a year later. Under the IOC, DfT will take cost and revenue risk and will manage the contract to allow for responsive decision-making. The operation of HS2 services will be akin to the concession model adopted by Transport for London for London Overground and Crossrail, with performance-based incentives for the operator.

Should the WCP operator not perform satisfactorily prior to 2026, it will not win the opportunity to commission and inaugurate HS2 services. However, the Secretary of State may choose for the franchisee to still continue operating classic services under what is termed the ‘reset period’ of up to five years.

Other key factors will be providing suitable interior layouts for inter-city services with luggage storage and bicycle spaces and providing high quality Wi-Fi on trains. Bidders are encouraged to address instance of crowding through timetabling, trains and fares. Among areas in which bidders may exceed requirements are minimising diesel operation on electrified routes or developing and trialling zero-emission solutions such as hybrid fuel-cell power packs.

Delay Repay compensation will be enhanced to provide compensation if passengers’ journeys are delayed by 15 minutes rather than the current 30 minutes. Simplified fares are promised, along with giving passengers the option to make their journey without a paper ticket for all journeys within the franchise area and a target for no less than 50% of such journeys to be made using smart tickets by December 2020.

The WCP operator will enter into an alliance agreement with Network Rail, targeted at improving passenger satisfaction and operational performance and overseeing preparatory work for the successful commencement of HS2 services.

In terms of branding, DfT calls for ‘a striking, high quality and modern inter-city brand’ for West Coast services, which has regards to overall costs and benefits, including potential future costs of de-branding. Bidders will be capable of exceeding requirements in this area only if they propose a brand that ‘is demonstrably capable of being adapted for future use by a successor operator’ and can be transferred at nil value. Mr Grayling said in his statement, with reference to HS2 services, that ‘no bidder will be able to create something that only they could run in the future’.

Bids in respect of classic West Coast services will be evaluated in a similar way to previous franchise competitions, on the basis of price and quality. Evaluation in respect of shadow operator services will be solely on a qualitative basis in terms of the extent to which delivery plans ‘give confidence to the Department that the Bidders’ approach will enable them to deliver the Department’s requirements and achieve the Department’s overall objectives’. In assessing bids, the Inter-city West Coast element will have a 44% weighting, the shadow operator requirements 32% and the combined West Coast and shadow operator requirements the remaining 24%. The shadow operator will be subject to an annual review from the start of the franchise, as well as a Readiness Review ahead of the launch of high-speed services. Bids are due to be submitted to DfT by 13 July, with the franchise award expected in April or May 2019.

This will allow a transition period prior to the franchise beginning in September 2019. The latest version of DfT’s franchising schedule suggested the WCP would begin in April 2019; DfT has agreed a direct award with incumbent operator Virgin Trains running for one year from 1 April, with the option of an extension of up to one year.